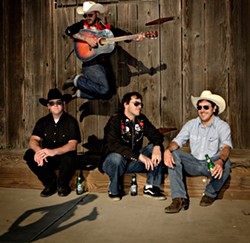 Reid Cain’s voice sounds like a corrugated tin roof being ripped from its rafters by a dustbowl twister. Calling it twangy is an understatement akin to calling cow patties inedible. Full of “character” (not the positive kind), Cain’s voice is a creaking leafspring on 1940 Ford pickup, the sound of a slamming screen door when your baby leaves you, the howl of a hound dog treeing a raccoon, the splash of a tear when the beer’s run dry. It’s so country it’s almost a cliché!

And that’s why it’s a freaking country music bullseye ... or maybe more like a country music shotgun blast of foot-stomping, two-stepping, hard-drinking fun.

The SLO Town band recently released its sophomore effort, In the Shadows, a follow-up to their revelatory debut Heroes & Outlaws, a record that put the “honky” into “honkytonk” (it also put the “tonk” into “honkytonk,” but that’s neither here nor there). This new disc continues with the band’s foray into traditional AM radio style and outlaw country. Think Waylon, Hank I, and Cash.

This time around, Cain passes the mic to bandmate Jon Clarke on a few tracks, but mostly this is a recording filled with Cain’s signature country insta-classicks, songs about ne’er-do-wells on drinking spells. Take the first lyrics from the first track, “Anytown”: Got the weekend off, hundred dollar bill, case of beer and a bottle of swill, gonna take you out for a night out on the town.

Is it just me, or is that sheer genius? 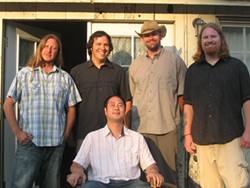 This Saturday, Jan. 3, The Benevolent Dr. Reid Cain and his band Red Eye Junction play an album release party in Downtown Brew before jumping the pond for a three-week, 18-date tour of Holland and Belgium. Cuesta Ridge will open the 21-and-older, 8 p.m. show, which costs $6 in advance or $8 at the door.

Red Barn riot
Über-acoustic duo Kenny Blackwell and Dorian Michael will present yet another amazing string concert this Saturday, Jan. 3 at Los Osos’ Red Barn Community Music Series at the South Bay Community Center at 7 p.m. (with a 6 p.m. potluck). A $10 donation is requested at the door.

These local virtuosos—Michael (guitar) and Blackwell (mandolin)—always deliver a tasteful collection of eclectic acoustic tunes and songs. According to press materials, “Blackwell studied with Jethro Burns before moving to California where he joined fiddler Richard Green’s band in ’93. His mandolin and guitar work have been heard in TV and movie scores. Since ’94, he has been a constant member of the famed Laurel Canyon Ramblers. Michael has played in about every style and in every type of work situation a blue collar musician could hope for. After years of honkytonk electric guitar followed by concentrating on solo
fingerstyle guitar, this project is a whole new challenge.” 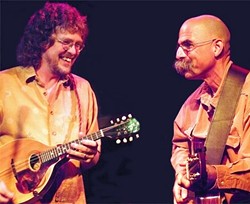 The two met by chance in a SLO music store, later at a backyard jam session, and again at a music convention in Los Angeles. It seemed destined. Blackwell wanted a chance to play outside of the bluegrass scene, Michael was looking for “a skillful musician who understood a wide variety of roots music.” Six months later their first CD was released and they were touring as a duo.

The duo will also play live on “The Minstrel Song Show” the day of their concert, probably between 2:30 and 3 p.m., on FM 90.1, KCBX, which also streams live at kcbx.org.

The music is incredible, the libretto inspired, with classic songs such as “Everything’s Alright,” “I Don’t Know How to Love Him,” and “Superstar.” Who in the hell does he think he is? He’s Jesus, baby! Is it any wonder Jesus Christ Superstar earned five Tony Award nominations?

There’s a pre-show lecture by Cal Poly Music professor Alyson McLamore in the Gallery Level Lobby of the Performing Arts Center at 6 p.m. The show starts at 7 p.m. Student and adult tickets range from $44 to $68. Call
756-2787 or order by phone, visit the PAC Box Office, or order online at calpolyarts.org. Due to content, this is recommended for those 14 and older.

More music...
Awesome jazz vocalist Inga Swearingen performs two shows—7:30 and 9:15 p.m.—with the Mike Raynor Group this Friday, Jan. 2, at the Inn at Morro Bay. Swearingen began her career as a singer-songwriter but quickly transitioned to jazz, moving in 2003 to Switzerland to begin graduate studies in voice with Susanne Abbuehl. Later that year, she was the first to win the Shure Jazz Voice competition at the world-renowned Montreux Jazz Festival, receiving both the vote of the judges and the audience (“First Place” and “Prize of the Public”). She returned to the festival in 2004 to play with the Matt Baker Trio. She’s also performed multiple times on the live NPR broadcast “A Prairie Home Companion” with Garrison Keillor, giving her the opportunity to perform all over the country. There are also few artists who can sing scat like she can. Don’t miss her!

This Sunday, Jan. 4 is the first Famous Jazz Artist Series concert of the new year, and by tradition, that means world-renowned saxophonist/vocalist Red Holloway plays his annual season opener at the Hamlet in Cambria. Holloway, who calls the beachside community home, has been the season’s opening performer for almost all of the series’ 18-year history. He will be joined by Art Hillary on piano, Henry Franklin on bass, and Garryck King on drums. As always, series co-producers Charlie and Sandi Shoemake (vibraphone and vocals) will also be on hand. There’s a 4 p.m. show for $15, a 7:15 show for $12, or see both for $20. Call for reservations at 927-0567.

On Wednesday, Jan. 7, reggae-Hawaiian-ska artist Sashamon comes to Downtown Brew for an all-ages, 8 p.m., $7 advance show ($10 at the door). According to his bio, “Maybe because he grew up on Molokai, Sashamon’s music brings a unique peaceful vibe to the island music scene.” His underground CD Japanese Squeeze became a phenomenon with the surf scene. Bare Feet opens. Check it out! ∆

Glen Starkey’s like a bargain: something you don’t need at a price you can’t resist. Always free at gstarkey@newtimesslo.com.