On Aug. 1, Cal Fire issued an evacuation order to hundreds of residents east of Santa Margarita. The Pond Fire was threatening 450 homes in a remote area south of Highway 58.

Emergency officials set up the nearby Santa Margarita Elementary School as an evacuation center. Responders waited and waited, but just one person showed up to the school that night to ask a few questions and leave.

"Most of the homeowners refused to evacuate and stayed on their properties," said Adan Orozco, public information officer for Cal Fire SLO.

Many factors can cause homeowners to defy fire evacuation orders, Orozco said. Some residents made arrangements to stay with family members outside the fire zone. But underlying it all is COVID-19, which first responders statewide say is complicating this year's fire season. 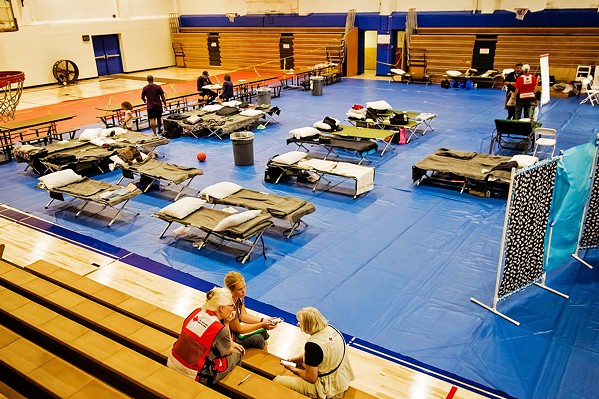 Basic wildfire protocols, like establishing base camps and evacuation shelters, now pose a slew of new safety risks related to the virus. Officials are adapting their procedures in response.

"Times have changed," Orozco said. "COVID has made us change the way we do things."

In the recent local fires that threatened or destroyed homes, Cal Fire and the Red Cross have set up "temporary evacuation points" for affected residents before determining the next steps. In the case of the June 15 Avila Fire—which ripped through vegetation in Shell Beach—that evacuation point was the Walmart parking lot in Arroyo Grande.

Nicole Maul, a Red Cross regional communication manager, told New Times that the nonprofit is taking each fire as it comes and tailoring its response accordingly. For the recent SLO County fires, like the Avila and Pond fires, it's worked with individual families to determine if they need a hotel room to stay in overnight. That hasn't been the case yet.

"The need is going to be looked at on an individual basis," Maul said.

Using hotels instead of crowded indoor spaces, like a school gym, is the organization's first preference for shelter during the pandemic. But Maul said that it all depends on the size and circumstances of the fire.

"People are used to seeing the cots being rolled out," Maul said of typical evacuation shelters. "We know based on the complexity of COVID-19, our first priority is getting folks into hotels. But that might not be what's warranted every single time, depending on the size of the fire and number of evacuations."

"As we have said throughout this pandemic, communal living environments and large gatherings of people indoors are particularly challenging for keeping transmission of COVID-19 at bay," SLO Public Health spokesperson Michelle Shoresman said in an email. "If requested, we would advise the Red Cross on options for sheltering people in a manner that limits transmission as much as possible. Hotel/motel rooms would be an ideal solution, if available."

But a larger fire or evacuation zone, or a fire in very remote location, may require the use of indoor evacuation shelters. In that event, emergency responders said they have strict health guidelines to follow, including mask wearing, sanitizing, and cutting down the number of people allowed in each shelter.

"Normally, buildings will have a certain capacity limit, but we further reduce that limit just to ensure that social distancing," Cal Fire SLO's Orozco said. "We would then look at additional centers or other buildings to keep people in. Everything we do, we do using CDC [Centers for Disease Control] guidelines and recommendations."

Those COVID-19 prevention measures are also being used for firefighters out on the front lines. At wildfire base camps, firefighters and crew members are required to wear masks, keep social distance, and go about their business differently in other ways, according to Orozco.

"Where we've made our changes is at base camp, where everybody comes to have a meal, have briefings, make plans, and pick up supplies," he said. "All these areas are now restricted in how many people can come in. There's hand sanitizing, masks, and 6-foot distancing."

"There's 6-foot distancing sitting at the meal tables. They can't just sit next to their buddies," Orozco explained. "There's no longer any sitting around and chatting after you're done eating. You have to finish eating and quickly leave so that section can be sanitized for the next person."

Cal Fire SLO is currently getting a test for how well those measures work. On Aug. 4, a kitchen crew member at the Pond Fire base camp tested positive for COVID-19. The crew member, an inmate at the California Men's Colony (CMC), was asymptomatic and tested positive after leaving base camp.

While the worker's module was quarantined as a precaution, Orozco said officials are confident that the virus did not spread to other fire personnel.

"The good thing about it is he wasn't part of any of the food preparation," Orozco said. "He was working with supplies, moving boxes around."

A State Department of Corrections and Rehabilitation official told New Times that the inmate, and the other inmates he worked alongside, went into isolation at CMC following the positive test, and that "the institution is currently conducting a contact investigation to identify any potential exposures to other fire crews."

By Aug. 7, fire crews had almost completely contained the Pond Fire. The blaze halted at 2,000 acres, after destroying one home and damaging another.

The destruction could've been worse, and responders encouraged all SLO County residents to prepare for, and abide by, an evacuation order this fire season—even in the face of COVID-19.

"If we need to evacuate someone, we're concerned that their house is going to burn down and that they're going to die," Orozco said. "That's why we team up with SLO Public Health and the Red Cross—it's a collaborative effort on trying to come up with what we can do to better protect everyone. ... Their safety, their health is always our No. 1 concern." Δ