After security costs for two visits by a right-wing provocateur cost more than $150,000, Cal Poly's academic senate may recommend limiting just how much of the bill the university will foot for similar events in the future.

The proposed resolution recommends that Cal Poly cap the university's share of security costs for speakers invited by student clubs at $5,000. Should the amount exceed the cap, it would be the sponsoring club's responsibility to pay the remainder. 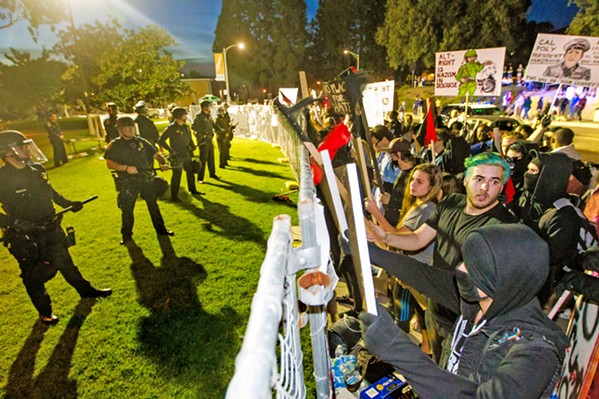 The resolution was set to go before the academic senate at a May 29 meeting, according to Mustang News, but was rescheduled to the senate's next meeting on June 5.

The university's policy about security costs for speakers came under a microscope after visits by former breitbart.com editor Milo Yiannopoulos in 2017 and 2018. According to the proposed resolution, the university spent more than $55,000 on security when the Cal Poly College Republicans club invited Yiannopoulos to speak on campus in January 2017, with SLO city spending an additional $9,000-plus for security. When the College Republicans and another student club, Turning Point USA, invited Yiannopoulos and two other "alt-right" personalities back to campus for a "fake news" panel in April, Cal Poly and the CSU system spent a total of $86,200 for security at the event.

"The university's policies should be amended to institute responsible limits to the financial burden that the university is willing to pay to assist student clubs and inviting speakers," the proposed resolution states.

Academic senate chair Dustin Stegner noted that, if passed, the resolution would only be an advisory recommendation. It would be up to University President Jeffrey Armstrong to decide whether or not to move forward with implementing it.

"The president can choose to either accept or decline," Stegner said. Δ