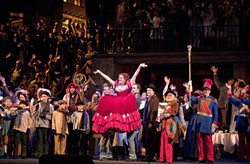 "Opera” is a concept nearly as overstuffed and pushy as the proverbial lady who signals the end of the show. Between the divas and the prima donnas, the mezzos and the tessituras and the recitatives, who can keep it straight? Forget all that! Opera is simply the circus of the rich, and just like the “bread and circuses” of the Roman plebians, it was meant to act both as a distraction from quotidian life and a “play within a play” whose heightened drama and life-or-death stakes made the perfect backdrop for the political and social intrigue of its heyday.

Enter Cal Poly Arts’ presentation of The Met: Live in HD, a series of screenings at the Christopher Cohan Center transmitted directly from the Metropolitan Opera in New York. The upcoming screening of La Bohème takes place at an obscene hour—they don’t even have the decency to wait until the clock strikes 10 on a Saturday morning, presumably because of time zones—but the chance to see a world-class opera is worth getting up for.

This particular La Bohème is a restaging of the great Franco Zeffirelli’s original production for the Met, conducted by Stefano Ranzani and starring Anita Hartig as Mimi, Vittorio Grigolo as her lover Rodolfo, and Susanna Phillips as the saucy singer Musette. These crazy Bohemians are the original hipsters, living on next-to-nothing (supplemented by the occasional lecherous patron) in the Latin Quarter of Paris.

If you haven’t experienced one before, La Bohème is a great starter opera. It’s a classic of the repertoire, one of the world’s most frequently performed operas, and its popularity has led to many adaptations and modernizations, including a popular staging by Baz Luhrmann and, of course, the musical Rent.

“Sì, mi chiamano Mimì,” sings the lead soprano to her newfound love, Rodolfo, when he asks her for the story of her life. She blushes to reveal that she is only a seamstress, though he himself is a struggling artist. “Yes, they call me Mimi, but my real name is Lucia.” Because, let’s face it, Mimi is such a hipster name.

Yet this is no opera buffa. In the same aria, Mimi tells Rodolfo “La storia mia è breve”—“my story is short.” At the heart of the show is the question of whether these words will prove prophetic.

A recording of superstar soprano Maria Callas’ stunning rendition of Mimi’s aria is available on YouTube as of press time. Listen to it a few times before you attend the live screening—it’s less than five minutes long—and you’ll experience that same joy of recognition that comes from seeing your favorite band play live or the touring company of a favorite musical. You may not find yourself belting the Italian lyrics in the shower—after all, even English-language operas are usually supertitled, and as Pierre Beaumarchais observes in his comedy The Barber of Seville, the inspiration for the opera of the same name, “Nowadays what isn’t worth saying is sung”—but the first tender words spoken between lovers or the cackling defiance of an unfaithful mistress will leave their impression all the same.

Plus, student tickets are only $12! This is the cheapest it’ll ever be to see an opera stateside, in any form, so take advantage of it. If you live on campus, it’s practically happening in your living room, anyway. Even the $27 regular ticket price is a steal compared to the average live opera production. So grab the strongest coffee you can find and head down to the PAC—you may just walk out of there a new Bohemian.