Poop can be very telling, and Cal Poly is hoping to take advantage of that.

As Cal Poly prepares for its winter quarter amid escalating cases of COVID-19 locally, it plans to up the ante on testing and screening after winter break, particularly among students living on campus. That could include a wastewater surveillance program, an effort in which the university would continually take samples from wastewater in on-campus residences and buildings to monitor for COVID-19. 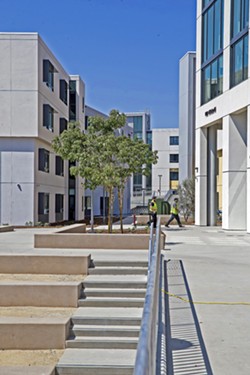 "If a positive hit comes up," Cal Poly spokesperson Matt Lazier wrote in a statement to New Times, "the people in the building will be asked to take part in campus screening to determine who is positive and needs to isolate, etc."

The university is still finalizing its plans, but Lazier said it aims to implement the program by early winter quarter.

Wastewater surveillance is gaining popularity among universities throughout the United States as an efficient way to keep track of COVID-19 outbreaks in ways that the usual testing methods cannot. An October analysis conducted by NPR showed that roughly 65 colleges in the U.S. had implemented such surveillance strategies, and later that month a team of scientists at UC Berkeley launched a pop-up lab to monitor Bay Area sewage for COVID-19.

Still, Michael Uhlenkamp, a spokesperson for the California State University (CSU) Office of the Chancellor, said wastewater testing is not being implemented throughout the entire university system.

"Each campus has been delegated the authority to implement plans that would best suit their specific campus needs in collaboration with their local public health agency and based on the resources they have available," Uhlenkamp wrote in an email to New Times. "So it's possible that a CSU campus might be doing something similar, but we're not aware of any CSU campus engaging in a similar practice." Δ