Editor's note: This story was updated at 12:30 p.m. July 9 to reflect changes announced after New Times went to press on July 8.

Update:
Cal Poly President Jeffrey Armstrong announced on July 8 that Paulette Granberry Russell had rescinded her acceptance for the position of vice president for Diversity, Equity, and Inclusion at Cal Poly.

In a statement sent out to Cal Poly students, faculty, and staff after 9 p.m., Armstrong said he was disappointed with the way community members expressed their opposition to Russell’s hire, which he said included misinformation and hateful and threatening emails sent to both himself and Russell.

“I ask all of you to consider how you would feel if people who didn’t know you were posting inaccuracies about your character and contributing to a frenzy of undue negativity about you,” Armstrong wrote in the statement. “Paulette, like all of us, is a human being and deserves to be treated fairly. I’m saddened to say that some members of our own Cal Poly community went so far as to publicly encourage others to make Paulette feel as unwelcome and uncomfortable as possible at Cal Poly. That is the antithesis of inclusion, love, empathy and respect.”

Armstrong defended Russell’s background and reputation, saying that she was found in multiple independent investigations to have no connection to criminal activity or wrongdoing in her position at Michigan State University during the Larry Nassar sex abuse scandal. He noted Russell’s extensive experience in the fields of diversity and education in higher education, including her current role as president of the National Association of Diversity Officers in Higher Education.

“I recognize that we moved quickly to hire Paulette and I appreciate the calls for a greater degree of visibility and shared governance in the hiring process of this important position,” Armstrong wrote. “Moving forward, we will slow down our efforts and conduct a full search, closely involving the campus community.”


Original story:
When Cal Poly student Jasmine Till received an email on July 1 regarding Cal Poly's new vice president for Diversity, Equity and Inclusion, she was happy to see that the new administrator, Paulette Granberry Russell, has a long history working in diversity at another large university. But after a quick Google search, everything changed.

As secretary of Diversity and Inclusion for Cal Poly's ASI student government, Till knew she'd be working closely with Russell during the school year. Through a little online research, Till found that Russell served as Michigan State University's Title IX coordinator during the infamous Larry Nassar scandal, in which the former MSU and USA Olympics doctor was accused of sexually abusing scores of women over the course of decades and convicted on seven such charges. 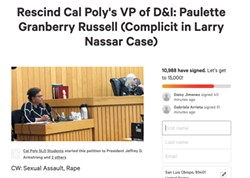 Horrified by the information she found regarding Russell's connection to MSU's failure to adequately handle allegations of sexual assault against Nassar and others, Till acted quickly. She compiled her research into a change.org petition requesting that Cal Poly rescind its job offer to Russell and conduct a transparent search.

Although Russell was not criminally charged in the Nassar case and was not fired from MSU after his conviction as so many others were, Till said it was Russell's duty as Title IX coordinator from 1998 to 2015 to ensure that MSU's sexual assault reporting and investigation processes were safe and effective for alleged victims of abuse. Instead, multiple third-party investigations into the Nassar case and others found the opposite, including one that led the U.S. Department of Education to fine MSU $4.5 million for the school's "systemic failure to protect students from sexual abuse."

"Every student deserves to feel safe and welcome on this campus, and I will do everything I can to push forward initiatives to improve cultural awareness and safety on campus," Till wrote in a statement to New Times. "We need to hold our administration accountable, and we're not holding back."

Though Cal Poly spokesperson Matt Lazier wouldn't say whether the university planned to meet the petition's demands, he told New Times that Russell was thoroughly vetted before being hired, and multiple investigations into the Nassar scandal found she had no connection to any criminal activity or wrongdoing.

What happened at MSU was "abhorrent," Lazier said, and he understands the concerns brought forward by students and faculty.

"However," he wrote in a statement to New Times, "it is unfair and unethical to consider an innocent individual to be guilty by association—and therefore unhirable—because they were employed by the university at the time the scandal occurred."

But it's not just Russell who is being called into question. Russell was offered the position through an "emergency hire" process that faculty and students say abandons the usual transparent search process and excludes stakeholder participation.

Lazier said Cal Poly used the emergency hire process to fill the position recently vacated by Jozi De Leon, who announced plans to retire in the spring, to "maintain continuity of leadership and momentum for the Office of University Diversity and Inclusion" at a time of social and racial upheaval. Lazier also said Russell was a finalist for the same position in 2017—before Nassar was convicted—and was received favorably by various search committees.

But in a July 6 letter to Cal Poly, faculty and staff called on the university to further explain its emergency hire process and its position that Russell had no connection to the Nassar scandal.

Sarah Bridger, an associate professor of history, was one of more than 1,000 who signed the letter, and said the questions and concerns facing Cal Poly now could have been dealt with differently if the school had gone through its usual hiring process.

"I really wish that it hadn't come to this," Bridger told New Times. "I think this is a problematic hire and the process itself shouldn't have been undertaken in the way that it was."