As Cal Poly hosts its two-day diversity conference, the university is taking heat over a photo in which alleged students appear to be ridiculing undocumented immigrants. 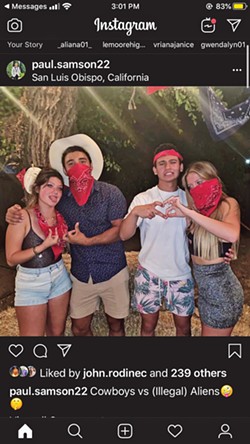 In the photo, which was initially shared to Instagram by "paul.samson22" and captioned "Cowboys vs (Illegal) Aliens," four people—two women and two men—are wearing red bandannas and flashing gang signs with their hands. One man is wearing a cowboy hat, and the photo's location is tagged as San Luis Obispo.

Although more than 230 people liked the original photo, several others took to Twitter and Reddit to shame those pictured and Cal Poly itself for what they say is endorsing anti-immigrant and racist sentiments. In response to a number of outraged tweets about the photo, many of which are aimed directly at Cal Poly President Jeff Armstrong himself, one Twitter user noted Cal Poly's lacking response to another racist incident in which a Cal Poly student wore blackface to a fraternity event in 2018.

"President Armstrong ain't gonna do shit," the user wrote. "... He will just send another email out."

Armstrong did just that at about 9:30 p.m. on Oct. 15, when he sent an email to Cal Poly students, faculty, and staff expressing his disappointment in the photo and those involved.

"We know that this photo has a negative impact on members of our community, particularly members of our undocumented student, faculty, and staff community; their allies; and others who work to promote an environment of inclusion at Cal Poly," Armstrong wrote in the email. "For those who are hurt by this photo, know that we empathize and we stand with you."

Matt Lazier, director of media relations, couldn't confirm whether the individuals pictured in the photo are Cal Poly students, citing the ongoing investigation into the situation. But "paul.samson22," the original poster, has information included in his Instagram account bio suggesting his affiliation with Cal Poly—"cal poly slo '23"—and according to Cal Poly's student directory, a student named Paul Samson is currently enrolled.

Cal Poly student Danyelle Anderson co-hosted the party with a friend where the photo was taken on Oct. 12. The party, she said, was a joint birthday celebration for the two and was themed cowboys vs. aliens. The yard featured Wild West decorations, like bales of hay and cowboy hats, and the inside was decorated to look like outer space.

Anderson told New Times that the party was intended to be a small gathering between close friends, but some individuals who were unknown to the hosts attended, including those photographed. The hosts didn't see the photo being taken, do not condone or support the message of the photo, and don't know any of the people in it, she said.

The hosts didn't find out about the photo until Oct. 15, and Anderson said when she saw it, she was shaken.

"My friend and I," she said, "we're both Mexican, so it was kind of just saddening that we really had no control over the situation."

The party's originally innocent theme, she said, was twisted into something immature and discriminatory by these individuals. Still, Anderson said she thinks the situation is being blown up out of proportion.

"Which is understandable," she said, "because of Cal Poly's history."

Cal Poly's campus erupted in 2018 when a student was photographed in blackface at a fraternity event that year, where others were dressed in stereotypical gangster costumes. That same year racist flyers were put up all over campus. The school had also faced scrutiny in 2017 over a photo of Alpha Gamma Rho members wearing culturally offensive outfits, and again in 2016 and 2015 when the Cal Poly College Republicans put up free speech walls, on which students wrote Islamaphobic, transphobic, racist, and sexist messages.

In 2013, there was debate over a Halloween party themed "Colonial Bros and Nava-Hos," where men wore Colonial garb while women wore stereotypical Native American costumes. In 2008, a crop science house on campus put up a noose, Confederate flag, and sign with racial and gay slurs in front of the building. Δ