Learn about Graphical Information Systems and their many applications

If you’ve punched in directions on your GPS system, accessed Google Earth, or even simply flipped a light switch or turned on a water faucet, you’ve likely been impacted by a GIS.

GIS, the acronym for Geographic Information Systems, is a way to translate information usually stored in databases into visual depictions on virtual, digital, or printed maps that are complete with coordinates. GIS systems are used in everything from planning residential growth to resource management and building transportation facilities. 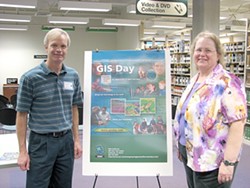 GIS Day 2008, a worldwide event, will be observed locally on November 20 at Cal Poly’s Robert E. Kennedy Library, hosted by Kennedy Library and the SLO GIS Users Group. The event will feature exhibits, demonstrations on the uses of GIS technology in local industries, and a gallery of maps created by campus users, SLO city and county agencies, and other local GIS users.

“The base data might be in the form of aerial photos, lines indicating roads or streams, points that indicate individual cases of a disease, or spreadsheets with demo-graphic information—the possibilities are endless,” said Carol Schuldt, Kennedy Library’s GIS resources coordinator. “A GIS user can combine such data and create a map that shows relationships that were hidden or difficult to visualize before. It’s truly an amazing new technology that can be applied to almost any field.”

Locally, GIS is used for everything from CalFire dispatching to emergency planning. Leanne Hindmarch, the architectural and environmental design librarian at Kennedy Library, said, “With the rise to prominence of Google Maps, Google Earth, GPS devices, and other similar products and services, spatial thinking has become increasingly a part of our everyday lives, and as a result, Geographic Information Systems technology is gaining a higher profile.”

GIS Day 2008 will be held at Cal Poly’s Kennedy Library on November 20 from 1 p.m. to 4:30 pm. The event is free and open to the public. For more information on GIS Day 2008, contact Carol Schuldt at cschuldt@calpoly.edu .