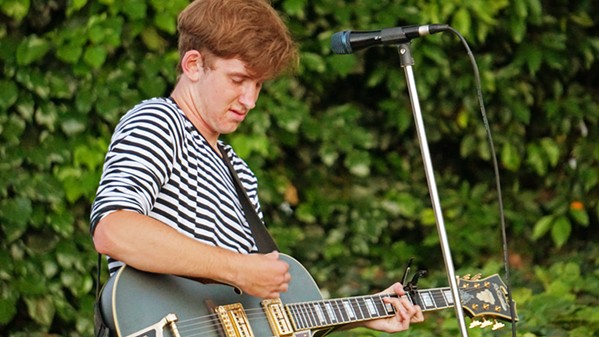 Popular music has a long history of songs about driving, from The Beatles' "Drive My Car" (1965) to Jackson Browne's "Running on Empty" (1977) to Tracy Chapman's "Fast Car" (1988) to Wilco's "Passenger Side" (1995) and on and on. Driving seems to call to many songwriters, most recently Cal Poly music major Will Chant, a Los Angeleno who recently released "How Fast Do You Like to Drive?"

The song begins with a lightly plucked guitar until Chant's voice slips in like a pair of well-worn jeans: "My eyelids are heavy, the clock won't forgive me tonight/ Sleep away all the noise, dream of candy and toys till it's silent," he sings before the song takes a romantic and narrative turn.

"But you're throwing rocks at my window, I turn my head/ So I grab my shoes and now the window is open, I'm climbing through// I say/ How fast do you like to drive?/ I feel like I've been losing my mind/ Just a little bit, ooh just a little bit ooh."

It's a slow building song as you start to hear a little piano under Chant's guitar, and then percussion, finally bass, another guitar, some background vocals, and finally synthesizer.

"How Fast Do You Like to Drive?" has all the earmarks of a classic driving song—a couple slipping away into the night for some backseat sex, later getting pulled over by the police for speeding.

"One hand on the wheel is all you need to steer don't you think?/ I'll keep my eyes on the road and find a spot to pull over so we can sleep/ The backseat is empty except for the light shining through/ I guess we got to pull over but this time we're joined by the red, white, and blue."

I listened to Chant's song on YouTube, but you can catch more of his music on Spotify. In addition to his current solo stuff, he's played with the LA band Rose Avenue since 2018. Chant co-wrote and co-produced the band's 2020 album This Game We Play.

Keep your eye on Will Chant. He's going places.

The slow return of live music ...

SLO Brew Rock can't yet open their indoor concert venue to crowds, but they are hosting virtual concerts you can watch online @slobrewrock with limited outdoor seating in their beer garden for diners. The venue's current collaboration is with power folk duo Bear Market Riot, which will be playing monthly fundraising concerts to benefit various local nonprofits. 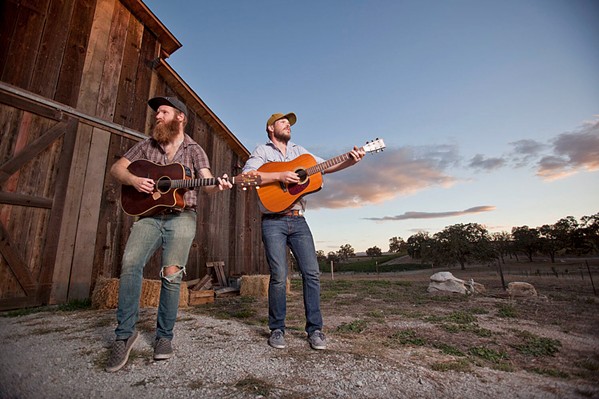 The first session is this Friday, Feb. 19, from 6 to 9 p.m., to benefit RISE, an organization that serves both victims of sexual abuse and their loved ones. The acronym stands for Respect, Inspire, Support, Empower, and the organization's goal is to create a "world free of sexual and intimate partner violence." It's clearly a great cause, and Bear Market Riot always delivers an amazing show.

Featuring Nick Motil and Kirk Nordby, the pair plays a percussive brand of folk, with high energy songs, excellent harmony singing, harmonica, and foot drumming. They're three-time winners of New Times' Best Of Readers Poll for Best Band, and deservedly so. This will be a blast!

The Cal Poly Jazz Ensembles will perform a virtual CD release concert at 7:30 p.m. this Friday, Feb. 19, to celebrate their recently released double album, another time, another place. Virtual tickets are $5, available online at pacslo.org.

According to press materials, "The album is the result of at-home rehearsals by members of the Cal Poly Jazz Ensemble and Cal Poly Vocal Jazz Ensemble that began in March due to the pandemic. Arthur White, director of jazz studies, wrote new compositions for the groups and set arrangements to some works originally performed by jazz and pop stalwarts Pat Metheny, Meshell Ndegeocello, Nancy Wilson, and Julian 'Cannonball' Adderley."

Some of White's original compositions include "The Way Home" and "Bishop Peak." Also includes are "Shiny Stockings" by Frank Foster, "Follow Me" by Pat Metheny and Lyle Mays, "Back at the Chicken Shack" by Jimmy Smith, and "Dolphin Dance" by Herbie Hancock. The album also features a student composition by Davis Zamboanga, who graduated from Cal Poly with a music degree in 2020.

"As the album project began to take shape, and it became clear that the students were adapting to their new environments, White called on the support of some renowned musician friends: jazz trumpeter and Grammy Award-winner Randy Brecker, and three Grammy-Award nominees—saxophonist Ada Rovatti, trombonist Robin Eubanks, and vibraphonist Joe Locke—to contribute solos from their East Coast home studios," press materials continued.

The album is available from iTunes, Amazon, Spotify, CD Baby, and other digital outlets. A limited number of hard copies are available. Send requests to awhite66@calpoly.edu. All proceeds will benefit Cal Poly Jazz Studies program. Δ