After protests from students and faculty, Cal Poly recently took the possibility of development on campus agricultural land off the table.

The university announced in a press release that the land, which includes fields and orchards between Highway 1 and Brizzolara Creek west of Mount Bishop Road, will no longer be considered for possible development under its master plan update. The decision was made June 11 after a meeting of academic, administrative, and student leadership. 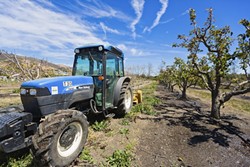 “These fields will remain agricultural lands,” the press release stated.

Preliminary proposals for the master plan update, which aims to address Cal Poly’s physical needs over the next 20 years, suggested possible construction of residential housing, parking lots, and even a hotel and conference center, on the land. Currently the land is used by students in the university’s agriculture, food, and environmental sciences departments to conduct research and get hands-on experience in their fields of study.

News that some of that land, home to fertile class 1 soil, might be lost to development sparked a backlash from many students and faculty, who argued that it went against the university’s “learn by doing” credo. Students formed a group to fight against the possible development. The group lobbied Cal Poly administration and collected more than 3,000 signatures on a petition to save the land.

“Obviously, I’m really relieved they decided not to build on the land,” said fruit science student Madaline Esquibel. “I think we really came together as a department to get the word out.

Agricultural and environmental plant science student Joel Leonard was one of the main organizers of the drive to ward the university off considering the land for development. Leonard called the decision to leave the land alone “fantastic,” and thanked the university administration, specifically Cal Poly President Jeff Armstrong, for hearing them out.

“Preserving this farmland and saving educational resources should be the focus of the Cal Poly administration,” Leonard said. “Listening to student and public input and revising his decision to build on the land shows great leadership by President Armstrong.”