When Cal Poly student Autumn Ford came out as transgender and decided she was ready to start hormone replacement therapy in early 2018, she quickly discovered that gender-affirming services weren't available on campus.

A campus therapist referred Ford to the only physician in San Luis Obispo County known at the time to provide gender-affirming care—noninvasive medical services that transgender and nonbinary individuals sometimes go through to align their bodies with their gender identities. 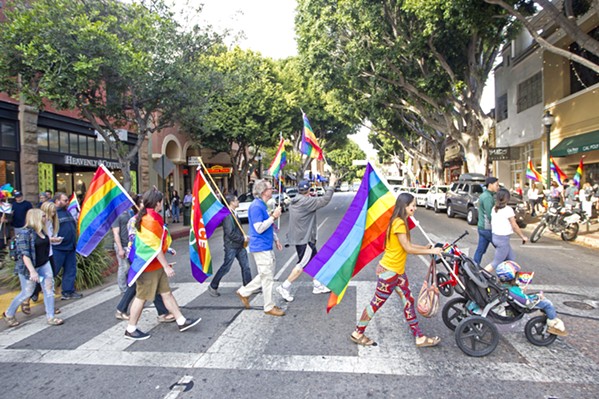 Ford waited three months for her first appointment, but it was worth the wait.

"There's a sense of relief, of this weight lifting off your shoulders," Ford told New Times, adding that for her, hormone replacement therapy has allowed her to look and feel more like her true self for the first time. "This is just one major component that helps our whole self feel better and move forward."

Now Cal Poly is offering gender-affirming care to its students. Campus officials announced in a Dec. 9 press release that hormone replacement therapy and related counseling and lab testing are being offered through Campus Health and Wellbeing as one of the university's many basic medical services already covered by student health fees.

The news came as a welcome surprise to San Luis Obispo's LGBTQ community and students like Ford, now in her fourth year at Cal Poly, who pushed the university to bring these services to campus for months.

"Gender dysphoria is an incredibly distressing state of mind," Ford said, adding that nonbinary individuals often struggle with depression and anxiety and continue to face discrimination in today's society.

Cal Poly's gender-affirming care treatment team is co-chaired by doctors Kimberli Andridge and Jennifer Bobell, who attended a three-day conference on transgender care at the Mayo Clinic in September. The new services, which have been available for a few months now, are offered through an individualized approach, combining hormone replacement therapy and any additional medical services necessary, including lab testing, counseling, and health education support.

Not a whole lot was needed to roll these services out at Cal Poly, according to Tina Hadaway-Mellis, assistant vice president for Student Affairs Health and Wellbeing. Competent doctors and counselors were already on staff, the prescription costs are low—they cost students only about $8 to $30 a month—and Hadaway-Mellis said the cost of implementation was basically "a wash."

Cal Poly isn't the only CSU campus adding gender-affirming care to its slate of basic medical needs. Hadaway-Mellis said the CSU system is slowly moving toward adopting more inclusive services, based on whether the campuses have the adequate resources and funding. Meanwhile most schools in the University of California (UC) system have covered gender-affirming services for some time.

Increased accessibility to trangender-specific health care at Cal Poly means improved access for all SLO County residents, according to Michelle Call, executive director of the Gay and Lesbian Alliance of the Central Coast. Campus Health and Wellbeing is now one of three known providers in the entire county offering hormone replacement therapy services, Call said, alongside Dr. Denise Taylor and Planned Parenthood, which just launched its services in June.

Having this care on campus will reach a whole new group of people and create shorter wait times for other non-student residents.