It’s Friday, Jan. 1, and I’m eagerly awaiting float No. 76 at the 127th Annual Tournament of Roses Parade held in Pasadena. Not to say that I’m in Pasadena. I’m in front of the television set nursing an abscessed tooth instead of my annual hangover. Man, I sure miss that hangover. It felt like baby kisses compared to the agony of an infected tooth. Thankfully, the sights and sounds of this annual tradition are enough of a distraction to make me forget that dental problems were a leading cause of suicide in the Old West. 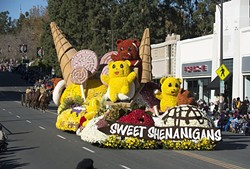 Cal Poly universities’ float, “Sweet Shenanigans,” is an 18-by-55-foot entry designed and built by teams of students from our local Cal Poly campus and California State Polytechnic University in Pomona. Meant to illustrate this year’s parade theme, “Find Your Adventure,” it features a sleuth of frolicking gummy bears.

Interesting side note! A bear gathering is actually called a “sleuth,” one of the weird terms specific to an animal. A group of hippopotamus is a “crash,” a group of zebras a “zeal,” a group of apes a “shrewdness,” and a group of emus a “mob.” Why? Because English!

The sleuth of 5- to 8-foot-tall gummy bears finds itself in a frozen, sugary wonderland with 23-foot-tall ice cream cone mountains, where a pair of bears rides a s’more sled down a scoop of strawberry ice cream in a lollipop forest. Nearby, two more bears have a snowball fight while another bear pirouettes on skates and another ice fishes. There’s yet another bear eating a letter that spells out the Cal Poly name, and one more on the back of the float waving to the crowd from a candy swing. All told, there are six animated elements to the float, which is decorated with hundreds of thousands of red, yellow, and orange mums, 85 percent of which came from California.

For the second consecutive year, Cal Poly universities’ entry has won the Lathrop K. Leishman Trophy for the most beautiful non-commercial entry. Leishman was the former president and grand marshal of the Tournament of Roses, often called “Mr. Rose Bowl” or “Mr. Pasadena.” He died in 1995.

The university students work hard all year to bring these floats to life.

“‘Learn by doing’ is on display for all the world to see,” Cal Poly university President Jeffrey D. Armstrong said in press materials. “Students from a variety of majors across our entire university use creativity, ingenuity, and more than a little perspiration to produce a marriage of art and engineering covered in beautiful flowers.

“The entries over the years have been fan favorites,” Armstrong continued, “but they also serve to unite our entire Cal Poly family—alums, family, and fans—who take pride in watching the float in action in beautiful Pasadena.”

The awards were announced at 6 a.m. Friday, just hours before the start of the two-hour-long New Year’s Day tradition. 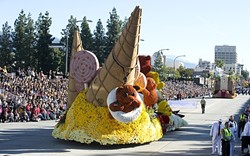 “We’re thrilled and overjoyed,” Josh D’Acquisto, Cal Poly’s Rose Parade float advisor, said in a statement. “A year’s worth of hard work has paid off. We’ve got some super-excited students.”

Since 1949, students from both Cal Polys—some 240 miles apart—have teamed up to create a float viewed by about 700,000 live spectators and an internationally televised audience of more than 100 million, including one with a very sore tooth but a whole lot of local pride. Go Mustangs!