A rift between faculty at Cal Poly and the university’s administration over salary and hiring reared its combative head in public on May 5.

That was when the school’s academic senate met and passed a resolution to address concerns over the university’s increased spending on well-paid management positions, while hiring and pay for faculty languished. 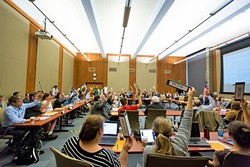 Speaking at the meeting, several faculty members referred to the university’s administrative costs as “expensive,” “bloated,” and “inefficient.” The resolution passed overwhelmingly, with just a single member of the senate voting against it.

“I think it sends a very strong message,” said Manzar Foroohar, a history professor with the university’s school of liberal arts and the member of the academic senate who penned the resolution.

According to California State University system human resources data included with the resolution, the number of full-time employees in management at Cal Poly grew by 37 percent between 2007 and 2014. Data from a recent report on the CSU system’s salary and staffing priorities by the California Faculty Association titled “Race to the Bottom” indicated that Cal Poly had a 55 percent increase in full-time managers and supervisors between 2004 and 2014, compared to just a 6 percent increase for tenure-track and tenured faculty.

In addition to hiring more managers, supervisors, and administrators, Foroohar and other faculty members also raised concerns about the widening gap in pay. Data from the CTA’s report, which was not included in the resolution, also indicated that full-time faculty salary at the university grew just 9 percent between 2004 and 2014. That’s compared to 22 percent for managers and supervisors during the same time period.

“All available data points to a budget process favoring the recruitment and retention of highly paid administrators versus recruitment of highly qualified faculty and staff,” the resolution read.

Some at the meeting raised alarm that the cost of the management hires and their salaries was being passed on to students. According to data collected and analyzed by The Sacramento Bee (also included with the resolution), the university’s administrative cost per student was approximately $1,226.36 in 2014, far more than other CSU system schools.

“[Students] pay more, they are getting less, and I am seeing higher administrative costs,” said senate member Belinda Morrill.

The recommendations of the resolution called for a moratorium on new management positions until the number of tenure-track faculty members is increased and the university’s student-to-faculty ratio is reduced to 18-to-1.

It also recommended that future raises for management positions not exceed the average percentage of general salary increases for faculty and staff and that state allocations for the university’s administrative budget not exceed the instructional budget.

Finally, the resolution demands that salary and raises for management positions be posted prominently on Cal Poly’s website and that the university follow a “transparent” budget process in consultation with staff and faculty.

While strongly worded, the resolution is simply a recommendation. Speaking at the meeting after the resolution was passed, Cal Poly President Jeffrey Armstrong said he was very aware of the concerns and was open to having a dialogue on the issue. He called for “aggressive transparency.”

“I know that some of you believe I don’t understand … but we are working hard, and we have the same goals,” Armstrong said.

Armstrong questioned the data provided at the meeting on management hires, noting that the numbers might include staff that were moved into management positions and were serving students.

“There are people in those totals that are helping students,” he said.

Armstrong said he would look at creating a group that would provide advice and ideas on the university’s budgeting on an ongoing basis and promised to “redouble” efforts to look at the university’s efficiency.

“Let’s continue the dialogue,” he said.