Cal Poly SQE continues to push for divestment from police

A local student coalition is celebrating commitments on Cal Poly's part to provide resource centers for students of color and additional advocates for students who have experienced sexual violence. But Cal Poly isn't budging on the group's demands to disarm and divest from the campus police. 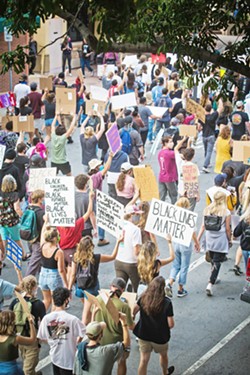 Alejandro Bupara is a member of Cal Poly Students for Quality Education (SQE), a local chapter of a statewide organization that aims to address issues of racism, sexism, and classism on campuses in the California State University system. For years San Luis Obispo's SQE has been pushing for increased diversity at Cal Poly through improved support services for the students of color already attending the university, and Bupara said the efforts are finally paying off.

"So we're very glad to have won those two things," Bupara said, "and we'll be following up and we'll be keeping the pressure on for our policing demands."

SQE is one of several groups pressuring leaders at Cal Poly and in San Luis Obispo to spend less time and money on policing and more on mental health support services, education, and community resources.

"And in the campus context, that looks like shifting money to resources like Safer, our anti-violence advocates at Cal Poly," Bupara said. "That looks like providing Black, Latinx, and [Asian Americans and Pacific Islanders] resource centers on every campus. It looks like providing more mental health counselors to meet the recommended ratio and hiring counselors that reflect the backgrounds especially of marginalized students and community members."

On May 1, Cal Poly SQE joined SQE groups across the state in a "No Harm, Disarm!" rally, calling for campus police to be disarmed, defunded, and eventually abolished completely.

No one expects that to happen immediately, according to SLO County resident Carmen Bouquin, but she said she hopes local leaders will keep an open mind.

"The police in our country are designed to protect white supremacy and folks with money," Bouquin said, "and we're trying to fight that, we're trying to fix the power dynamics within our communities and our country so that the most vulnerable get the care they need and can respond to this crisis properly."

Matt Lazier, a spokesperson for Cal Poly, said the university has no plans to disarm or reduce funding for its police department at this time.

The Cal Poly Police Department employs 18 sworn officers and sergeants, all of which are armed officers.

While Lazier said its true that Cal Poly's police officers do have access to AR-15 style rifles, handguns, ammunition, Tasers, batons, pepper spray, and varying forms of body armor—as outlined in SQE press release detailing its "No Harm, Disarm!" campaign—it's not equipment that officers routinely have on hand while out on patrol. The police department's AR-15s and shotguns, for example, are kept locked in vehicles at all times and are only used in the event of extreme threats to public safety, Lazier said. Such equipment, he said, is standard for any police department and applies to those at all CSU campuses.

The Cal Poly Police Department's budget this school year is $3.5 million, making up less than 1 percent of the university's total budget.

Lazier wrote in a statement to New Times: "The Cal Poly Police Department (CPPD) plays an integral role in maintaining the safety and well-being of our community members on a daily basis, including: responding to calls for assistance throughout campus; providing security oversight for major events; working proactively with the university community through crime prevention and personal safety programming; and administering training and planning around Cal Poly's emergency response policies and procedures."