When Sam Byrd first arrived at Cal Poly three years ago to take over as the lead coordinator for LGBTQ-plus campus life, a position that had been vacant for several years, Byrd realized right away what their mission and focus needed to be. It went beyond the confines of the Cal Poly campus.

"I could tell from my interviews with students that they really wanted to see more strategic coalition building," said Byrd, who prefers they/them pronouns. "Early on, one of the things we really wanted to do was to reach out in the community and be a stronger part of what was happening in SLO County and the greater Central Coast. So that's kind of been my role." 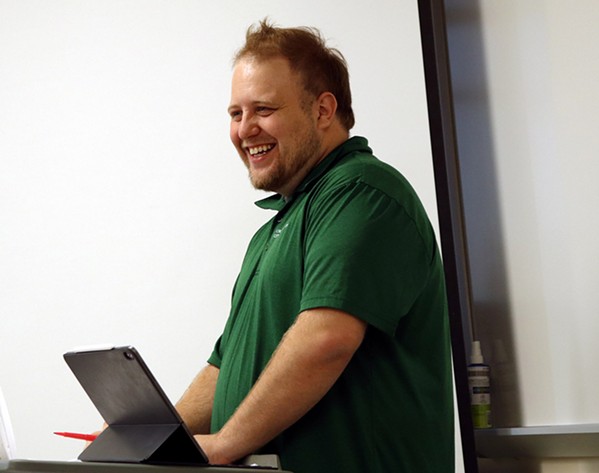 It's a role that Byrd has flourished in. Over the past three years, the Appalachia native is credited with building a stronger alliance between Cal Poly and the broader LGBTQ-plus community, through groups like the Gala Pride and Diversity Center (of which Byrd is now the vice president), and by stepping into various other leadership roles, from the faith community to local law enforcement.

"Sam has really changed the relationship between Gala and Cal Poly, and has spent the past three years making this collaboration happen—making sure that the college is connected with the community," said Michelle Call, executive director of the Gala Pride and Diversity Center.

Most recently, Byrd's efforts have gone toward orchestrating this year's Central Coast Pride Week, which runs May 16 through 23. For the first time in its 25-year local history, Gala and Cal Poly are partners on the celebration and made the decision to move it up to the month of May, instead of July. The date change allows the Cal Poly and Cuesta College student communities to fully participate, Byrd explained.

"My students had already been talking about wanting to partner and do something much larger in the county because, most of the time, students are gone during the summer," Byrd said. "I think we've put together a really great virtual Pride for this year."

The new Gala and Cal Poly collaboration—which could become an annual staple—showcased Byrd's ability to unite the diverse cross sections of the local LGBTQ-plus community, according to Call. And that's a skill that Byrd knew would be valuable once they got to SLO County.

"Working with this community can sometimes be like herding cats," Byrd said with a laugh. "There are a number of different groups and identities that are housed under these variables, of sexual orientation, gender identity, and expression. There's a lot of great work that's happening, but sometimes they happen in silos. ... I'm trying to be very strategic with how I position my role at the university and within the community, because I am able to see those connections and help form those bridges."

Byrd's unique skill set is connected to their unique background. Growing up in a "highly conservative and religious" Appalachian community in North Carolina, Byrd wrestled with their sexual orientation and gender identity in a stifling and unfriendly environment. After attending college at Appalachian State, Byrd's career took them to UC Berkeley, "one of the most liberal and affirming places I've ever been," before Cal Poly. That winding journey gives Byrd wide perspective that helps them connect with all types of people and identities.

"Navigating my own identity as a queer and trans person—and a person of faith—within those communities, it kind of always felt like I never fit in anywhere. I always existed in the margins within every space I was in," Byrd said. "It's taken me many years to be able to synthesize and own who I am. And so many of our students experience that, so many of our community members experience that."

Byrd now encourages Cal Poly students to embrace their identities and to take on leadership roles at the university—no matter how underrepresented their identity may be in a particular field or arena.

"Part of our strategic plan is to infiltrate every space. We need to have queer and trans leaders in every space on campus," Byrd said. "I think that's been a lot of our growth and success. We are curating and developing leaders in all of those spaces and connecting them to one another."

Those spaces and connections are needed throughout the county, Byrd said. In addition to being vice president at Gala, Byrd participates in the SLO Police Department's Community and Policing Together initiative and works closely with the Community Foundation of SLO County—trying to advance LGBTQ issues wherever they can.

"[SLO County] needs a stronger, more outward-facing form of acceptance and inclusion," Byrd said. "We need more queer spaces where folks can feel a sense of community. We need more visibility for queer and trans events."

Byrd is also very active in the local faith community, despite an oppressive experience with organized religion as a kid in Appalachia. Byrd said that while SLO County does remind them of home more than it does Berkeley, there's a loving and accepting community they've found here—and exciting opportunities for progress.

"I'm a very spiritual person, and I feel truly affirmed here," Byrd said. "I love living on the Central Coast. There's a lot of hope, and growth that I think our community needs to have." Δ