This is how The Other Shore, the latest production from Cal Poly’s Theatre and Dance Department, begins.

Just moments before, the audience had gathered in the lobby of the Spanos Theatre. We were given white crates and told to follow the guide toward an enclosed setup on stage, lined with stark, white plastic sheeting and filled with more crates; these would be our seats for a show that brazenly defies conventional boundaries between spectator and spectacle. 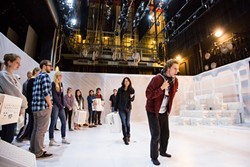 Written by the Nobel Prize-winning author Gao Xingjian, The Other Shore has a history of pushing the envelope. Upon its debut in the late ’80s, the play was banned by the Chinese government for its subversive and experimental commentary on the relationship between society and the individual.

There is no strict or linear story to the play. Instead, Xingjian creates a loose framework for various human interactions. One actor leads audience members around with a rope, then more actors join him. They decide to travel to “the other shore”—an ambiguous space where they face new knowledge, violence, greed, shame, and the entire gamut of psychological and physical reality.

“It’s this investigation into human experience,” director Josh Machamer told New Times over the phone. “That sounds really broad, but it really explores the sense of what it is to be human—different encounters, confronted with groups, fear, confronted with pain or loss or desolation.”

Essentially, The Other Shore works through a series of themed vignettes. After crossing “the shore,” the actors collapse and awake only to realize they know nothing. One steps above the rest, teaching them the words for body parts (“foot,” “hand,” “eyes”). They speak slowly, racked by a kind of absurd confusion. One points to their hand and with confidence shouts, “band!” As the play’s opening line commands, the scene takes on the atmosphere of a crazed game. It’s chaos that soon evolves into hysteria.

The group turns on the teacher, thrashing and mauling her into the ground with bestial ferocity. She dies; they learn about death. Onto “something bigger and more complex.”

For Machamer, the play’s non-linear structure and broad, opaque themes offered both a creative challenge and ripe opportunity.

“It started with an idea,” he said. “Because of the ambiguousness, it was all about what particular story did we want to tell and what was the most effective way to tell it. Right away, that became exploring the actor/audience relationship. We wanted to shift and change that in a way that was representational and encompassing. The audience is on stage; it really incorporates the audience as a traveler.”

Unlike the typical theatrical experience,  The Other Shore rips the fourth wall down before the show even begins. From the moment you step into the sparse, almost claustrophobic set, you become a part of the play. The actors react and act according to who the audience is, where they sit, how game they are. If you choose portable seating, you will move throughout the play—from the front to the middle to the back. You are in it in a visceral way just as the actors are.

In some instances, this immersion can prove bewildering, stressful, and deeply moving. The mood is ever changing, and to both Machamer’s and the actors’ credit, there is never any sense of inconsistency or formless nonsense. The absurdity of the play, which contains a high-stakes card game, a peddler of “dogskin plasters,” and a quasi-Buddhist speech, builds with increasing furor over the roughly hour-and-a-half running time.

With no elaborate special effects, ornate costumes, or other embellishments to distract, the audience is forced to focus and reflect. Why was that character so mean? Why did they reject him? Where is this going? Who is that? How? What? Why?

During one of the last scenes, once some of the audience has moved to the center of the stage, the actors begin to circle them at a frenzied pace. They are looking for something—money, food, a subscription to People magazine, a leader, a human connection.

This is where The Other Shore excels. It connects the actors and the audience, individuals and groups in a way atypical for most theatrical productions. As one of the characters states, “We’re all in this together.”

“I think it [the play] has endured because, from a theatrical perspective, you’re given a blank slate,” Machamer said. “I’m really interested in the exploration of the aesthetic. What this could be, in a lot of ways, is an acting exercise that stretches actors … in a whole encompassing way. It [plays] with the sense of experience and what we consider theater. It’s not just different for different’s sakes. It’s about the power of theater and its ability to affect people in what seems like non-rational means.”

Jessica Peña recommends dogskin plaster. It really does cure everything. You can buy some from her at jpena@newtimesslo.com.