What would happen to Henry Higgins and Eliza Doolittle if they lived in the here and now?

Several have tried to answer this question. Some have managed adequately (see: She's All That) while some have floundered aimlessly (see: last year’s cancelled sitcom, Selfie). But most agree that the dynamic between the overbearing professor and the simple girl would be different. There’s no room or reason for Pygmalion’s Edwardian-era, must-wear-corset-style sexism. We’ve progressed. We’re better now. Or are we? That’s the question playwright Theresa Rebeck poses in Spike Heels, the latest production from Cal Poly’s Theatre Department. 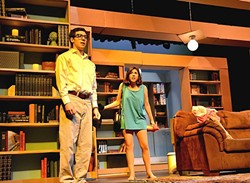 First produced in the early ’90s, Spike Heels subverts George Bernard Shaw’s original material with some much-needed nuance. At the center of the story is Georgie, a young, brash woman with a voracious appetite for both men and the attention they give her. Opposite her is Andrew, a milquetoast professor who’s been teaching Georgie, his neighbor, the classics in exchange for what exactly? It’s not always clear. Andrew is clearly attracted to her, but he has a fiancée, Lydia. Georgie is sometimes attracted to Andrew, but she has another suitor, her boss, Edward. Thus begins a love rhombus rife with sexual intrigue and emotional turmoil.

“It’s a play about relationships,” director Heidi Ness told New Times. “Who doesn’t deal with relationships? It doesn’t even have to be romantic, but friendships, co-workers, and family. There are issues regarding relationships you find anywhere. Each of these characters has moments of strength, moments of vulnerability, and moments when they surprise themselves.”

Indeed, all is not as it seems. At first, Andrew appears to be the ideal man—intelligent, caring, and clean. Georgie, as played by Christina Garcia, talks the talk and walks the walk, in high heels to boot. But when it comes down to it, neither is as innocent or confident as they claim. When Andrew hears that Edward told Georgie he could “rape her if he wanted,” all hell breaks loose. Jacob Corsaro transforms Andrew from a nice enough guy into a petty, manipulative jerk while Georgie devolves into her most desperate state, dressing skimpily and showing off Edward to egg Andrew on.

In any episode of any traditional sitcom, you could see this scenario play out in the following way: Andrews grows increasingly jealous; Georgie’s about to sleep with Edward; Andrew rushes in, stops them, and they declare their love for each other; he breaks up with Lydia; they live happily ever after in some hackneyed heaven. To the play’s credit and the credit of Ness and her cast, Spike Heels does not do that. Unlike Pygmalion, this story is not afraid of complexity, conflict, or ambiguity. 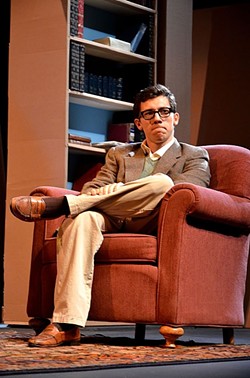 Designed by Pegi Marshal-Almundsen, the set enhances the story’s psychological heat. All four characters yell, seduce, laugh, and crack wry one-liners within the space of a cramped apartment. Bookcases line the perimeter, crowding the room with many leather-bound books, candles, and other personal paraphernalia. It’s clear the books aren’t necessarily there to be read. Like Georgie and Andrew, they’re on display, to present a certain version of themselves to acquaintances and each other. And it’s not always a pretty picture.

What Spike Heels does best is rip through the layers, the book cover façades, and the lies to reveal how messy and unclear relationships can be. In what is probably the play’s best scene, Georgie and Lydia finally confront one another. You’d think it would go one way—Lydia lashes into Georgie for hitting on her fiancé. But once again, Rebeck circumvents expectations. Played by Libby Wahlmeier, Lydia is hilariously uptight and snooty, yes, but she’s also understanding and strong.

“You find these two women together and Georgie, at this point, starts to realize that balance, seeking balance in her relationships, needs to come from within herself,” Ness commented. “She needs to find that self-value. I think it’s kind of beautiful, one of those moments that’s surprising.”

Jessica Peña also has a lot of bookcases, but she’s not trying to hide anything. Nope. Not at all. You can contact her at jpena@newtimesslo.com.