Cal Poly placed all 27 of its fraternity and sorority chapters on indefinite suspensions April 17, amid continued campus outrage over a photo of a Lambda Chi Alpha member in blackface that spread across the county and country. 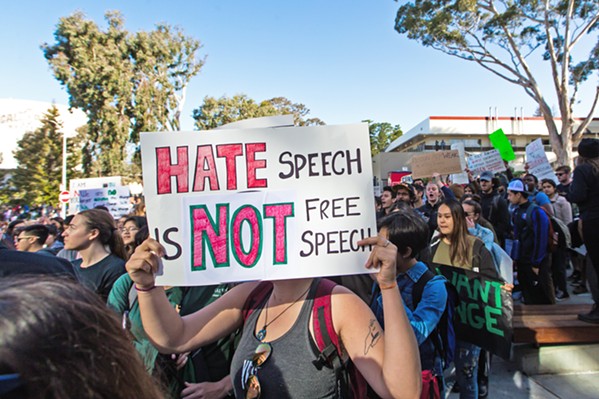 "Greek life is a privilege at this university," Cal Poly President Jeffrey Armstrong wrote in a letter announcing his decision to the campus community. "Until all fraternities and sororities are conducting themselves in a manner that is respectful of all students—as well as holding each other accountable—they will not have a place at Cal Poly."

The suspensions for Interfraternity and Panhellenic Council organizations came just three days after hundreds of students and more than 40 campus organizations boycotted Cal Poly Open House activities on April 14, when prospective students are welcomed onto campus and introduced to student clubs. Many clubs left their booths empty and marched through campus in protest holding signs like, "Cal Poly: Not safe for students of color." Some students called for Armstrong's resignation after he told local media that the student in blackface wouldn't likely face expulsion.

In his letter, Armstrong said he made the decision to halt all Greek life after learning of a second racially insensitive Greek-related incident on April 14. In a photo that was taken six weeks ago, three Sigma Nu brothers are dressed like Hispanic gangsters. A caption read: "When you get [t]he holmes to take a photo of la familia."

"If Greek life is to remain at Cal Poly, these students must reinvent their organizations and activities so they add value to our campus community and foster a culture of inclusion instead of undermining it," Armstrong said.

Cal Poly spokesman Matt Lazier added that the suspensions are also a broader response to "numerous problems over the past few years" in Cal Poly Greek life, which he said included "racially charged and insensitive events, sexual assaults, hazing and alcohol-related deaths, and violations of the university's code of conduct regarding hosting social events."

"Too often, the Greek organizations have allowed members to do wrong, and they have not intervened to prevent or correct obvious problems," Lazier said.

The terms of the suspension are still under discussion, Lazier said. Typically, it prohibits the fraternity or sorority from holding official events and gatherings. The suspension will not apply to cultural fraternities and sororities, which are governed by the United Sororities and Fraternities Council.

Lazier said the university's action isn't to "get rid of" Greek life on campus, but "rather a pause and a reset."

"The president acknowledges that many individual members of Greek organizations have not personally broken any rules or displayed any hurtful or thoughtless behavior," he said. "This suspension is not intended to punish those individuals, or even any particular organizations, but rather to say: 'Greek culture as a whole is broken. ... We will welcome Greek organizations back to active status when we are confident that they have a definite and achievable plan to hold themselves and each other accountable."