Following two weeks of protests and meetings with school administration, Cal Poly students advocating for new policies to improve diversity and inclusion on campus will hear an official response from Cal Poly President Jeffrey Armstrong on or before Dec. 5. 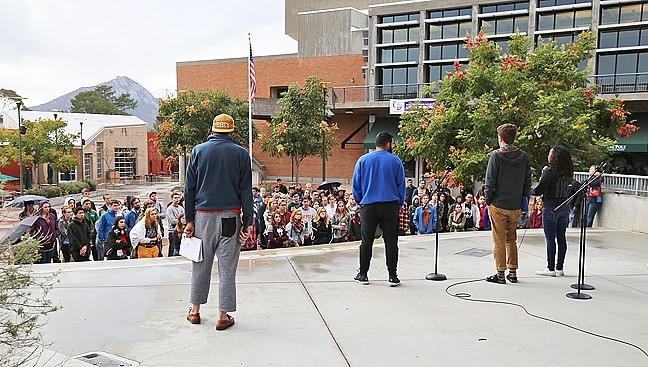 “President Armstrong and his leadership team are considering all of the ideas that were raised over the past two weeks to improve our campus climate,” Humphrey told New Times. “We are working diligently to develop a plan to share with the campus community before the end of the quarter.”

Changes may include increasing diversity-related activities during Cal Poly’s Week of Welcome orientation and introducing a mandatory online diversity education program, similar to the already-required sexual assault and alcohol awareness online programs, according to Humphrey.

“We agree with our students on most of the ideas that have been generated over the past two weeks,” Humphrey said.

Tensions have spiked on campus since a Nov. 10 “free speech wall” was marred with bigoted comments written by anonymous students. The incident ignited protests organized by the Black Student Union, Triota, and the Queer Student Union and has unified student activists into a new movement called SLO Solidarity.

Matt Klepfer, a Cal Poly sophomore and SLO Solidarity leader, told New Times that Humphrey’s proposed changes to WOW week and a required online class would be a “good start,” but they can’t be the sole result of the movement.

“We expect comprehensive reform, more than just improving the new student experience,” Klepfer said. “That is what this campus desperately needs.”

SLO Solidarity is in the process of drafting a written list of reforms that they expect to be taken up by Cal Poly school administrators.

The document has not been given to the administration yet, but many of the items on it were discussed in meetings over the last two weeks and are being considered as part of Armstrong’s upcoming announcement, Klepfer said.

Within that is a long list of proposed reforms that vary in their scope and ambition. Ideas include increasing the number of tenured or tenure-tracked faculty of color, requiring undergraduates to take a course in Women and Gender Studies or Ethnic Studies, increasing funding to social programming geared toward minorities, and starting Cal Poly pathway programs for local K through 12 students from low-income families.

Cal Poly President Armstrong was on vacation before Thanksgiving and couldn’t be reached for comment.