Stark white walls hold a small collection of art: traditional photographs and paintings as well as slightly nontraditional graphic design posters featuring a rainbow of typography. They hold sculptures atop simple ivory plinths, ranging from a coral-like structure with mirrors on the inside to what looks like the framing from a bike and its horn covered with Silly String. Based on this description alone, the collection may seem mismatched, a hodgepodge of artwork with no clear rhyme or reason, but it somehow works. 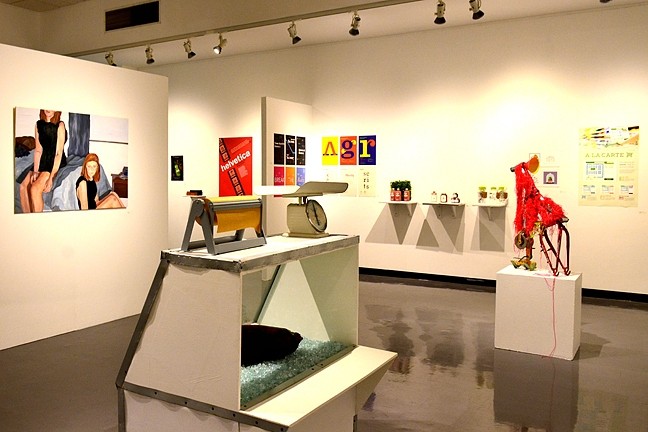 Perhaps more impressive is that students made all the artwork on display in the modest gallery. More specifically, these were Cal Poly students. After all, it is the University Art Gallery.

The annual juried student exhibit showcases the photographs, paintings, sculptures, and graphic design work that students made throughout 2014 and 2015 thus far.

“All the pieces in the exhibit were made this year, or in spring quarter of last year,” Garet Zook, the gallery coordinator, said. “They were all made in a class with a supervisor. Each student was allowed to submit five works. We got 147 submissions, and from that we had to narrow them down to about a third.”

One of the pieces, Nocturne, depicts a musician standing in front of the fridge, clutching his guitar, while another person is making a midnight snack. The only light—in the painting that is—comes from the bulb inside the refrigerator, streaming in from the door left slightly ajar, illuminating a bright sunburst on the guitar. The rest of the painting has the muted colors typical of a room bathed in darkness. The artist, fourth-year art and design major Kendra Dimino, said she drew inspiration from the curious habits of her creative-minded friends.

“A lot of my friends are amateur musicians,” Dimino said. “And they are just as passionate, if not more, than big-name musicians. I saw how they always make time to play, to express themselves through something that they love. I did this painting a year ago. The person in the picture is my boyfriend, who’s in three different bands. I noticed that he would be in the middle of talking, or doing something, and then all of a sudden, he would just have to pick up his guitar and start playing. So this painting was really about capturing that moment where the need to express yourself, that love for your hobby, just takes over. I wanted to bring to light that dedication to something that he loves.” 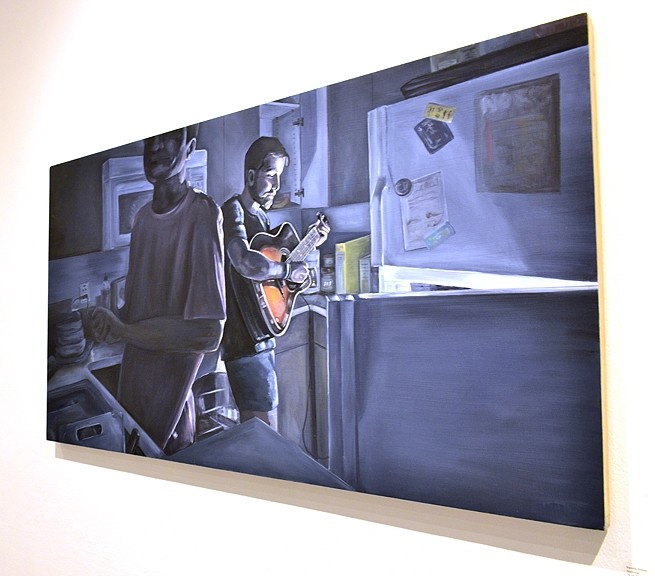 Dimino said she starts her paintings with an idea, staging a photo shoot in order to get a reference. She picks the photo she wants to use, playing around with the composition and perspective until she gets what she's looking for, and then begins to paint. Though she started with her usual process for Nocturne, she ended up with something completely different.

“I actually ended up with a candid shot,” Dimino said. “Which makes it even better, because it’s more real. I had set up a photo shoot, and I was taking pictures, but then my boyfriend’s roommate came out and started washing his hands. Somehow, I got a picture of that, but I thought it was mistake; I thought that I messed up. But I looked at it again, and it ended up being exactly what I wanted because I had wanted to focus more on the realistic moments in life that are often underappreciated or ignored. And that’s what I got with this picture.”

Dimino, a painter by nature, has another submission on display in the exhibit, this time a photo series called Teflon Galaxy. The series—which placed first for Best in Show—stemmed from an assignment focusing on out-of-context photos that Dimino undertook in a photography class. The seven photographs depict ethereal-looking orbs on a stark black background. Though minimalist in presentation, the colors are the real draw. One is a rusted gray color, texturized with what appears to be mountainous terrain. Another is a burnished bronze, and one is a multi-faceted sphere in shocking sapphire. The pictures themselves are striking, but they garner even more interest upon discovering what they truly are: merely the bottoms of Dimino’s kitchenware.

“I got the idea when I noticed the textures on some of my pans,” Dimino said. “I found that the horrendously burnt up pan with all the scratches looked like Mercury, and the one stained by sauces kind of looked like Mars. Same thing with the one that had a ring pattern. I thought that it looked just like Saturn. So I just photographed them straight down and cut and edited out the identifying factors, as well as adjusting the color to make it stand out more. I wanted to put the focus on the textures and the shapes. I really wanted them to look like the images you see from the Hubble telescope of these, like, otherworldly planets.”

Intern Adriana Catanzarite is out of this world. Contact her via Arts Editor Jessica Peña at jpena@newtimesslo.com.