Dance is an art form all its own. Unless you count competitive air guitar, no other performing art offers the same physical agility, grace, and prowess the way dance does. It requires a skillful combination of drama and discipline—the kind that Orchesis, Cal Poly’s student dance company, has been featuring for the last 45 years.

Founded in 1969, Orchesis is unlike many other college dance companies. Because Cal Poly does not have a dance major, the company offers a vital opportunity for students to not only learn dance, but to perform, choreograph, and direct their own material.

This year is no different. For their 45th anniversary concert, Release, director Christy McNeil has assembled a diverse showcase of 11 pieces that range in style from her own James Bond suite to ballet to a tri-partite finale set the tune of Mumford & Sons.

“It’s been really great,” McNeil told New Times. “We have a good group of students that have a wonderful work ethic. The good thing about teaching dance at a polytechnic is that the students have fairly high GPAs. They are students that are already overachievers, so discipline isn’t a problem for these students. I’m really proud of their work so far.”

Out of the show’s 11 total pieces, four were created by students, with the rest directed by faculty members and guest artists, including Mark. A. Haines and Mike Esperanza. The latter choreographed the show’s finale—a touching, contemporary number that exemplifies the company’s reputation for vibrant and compelling performances.

As the piece begins, the steady rhythm of Mumford & Sons’ “The Cave” foregrounds a single dancer in the middle of the stage. As the beat amplifies and the banjos grow heavy, a group gathers in a series of sharp movements. They separate and reform in between intervals of handstands, tumbles, and lifts.

For the second movement, the music softens, and the dancers pair up. Across the stage, one partner drags the other as they carry a tea light. The scene then evolves into one of parting, as the graduating senior dancers embrace and make their way to the other end of the stage. In the final movement, the group comes together once more. It’s a complex and elegant piece, both emotionally and technically. It’s rich with details, like subtle rolls of the wrist, that McNeil encourages within the company’s routines. 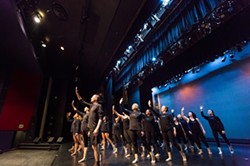 “Shows like Dancing with the Stars, the big applause comes from a big leap or a big jump,” she explained. “People start to think that’s what’s praised on the show, so that’s what makes dance exciting. For me, and a lot of my peers, it’s things like the shoulder rolls.”

In McNeil’s piece, this emphasis on strong technique takes precedence with a performance based on the music of the James Bond films. It’s a classic jazz production that features a showier, more theatrical style of dancing.

“There’s more of an acting appeal to it,” McNeil commented. “They all have to play different Bond girls, villains, etc. We’ve been working a lot on legs and technique. You have to have very straight legs or very bent knees. It’s very, very specific. That’s been my focus is to really nail them on technical things.”

That kind of precision requires an impressive dedication. Every fall, students audition for the Orchesis Dance Company. A group of 25 to 30 are chosen, and they immediately begin a demanding schedule that requires a minimum of eight hours of rehearsal a week, at least two hours of student-run rehearsals on top of that, and guest artist rehearsals on the weekends. It’s a schedule that reflects the intense physicality inherent in the practice of dance.  At Orchesis, both art and fitness take  center stage.

“I put a lot more focus on strength in my warm-ups, a lot of flexibility,” McNeil noted. “My warm-up is more dynamic stretching that builds strength and flexibility, not trying to do the splits. That’s not gonna be useful for you if you’re not a professional dancer.”

Cal Poly student Wade Mead has been dancing for two years, but this is his first year with Orchesis. For him, the company offers not only a chance to improve technique, but also a chance to be creative and reap the many health benefits that come along with dance.

“Being in the company has been a great opportunity for growth,” he said. “We have had the privilege to work with some incredible guest choreographers, and several amazing dancers have taught master classes. It also provides some satisfying creative license, as we often get to take an active part in the choreographic process. … The flexibility, balance, strength, and body awareness required to dance well make a great recipe for fitness, especially coupled with the social environment in which it takes place.”

Like many students in Orchesis, Meade is not a professional dancer. He’s a Kinesiology major and personal trainer who just happens to have an avid interest in dance. And this is what makes Orchesis unique in McNeil’s opinion. For 45 years, it’s been providing a well-rounded outlet that combines art, collaboration, and fitness to hundreds of well-rounded students from every background.

“I think what really makes it so attractive is that these students have something else going on in their lives,” McNeil said. “One of my favorite things in our program is each of the dancers have their photo and their major, and it’s so cool to look through. It’s really cool for someone to come to this show, and you look at it, and there’s Ag Business, Engineering, Viticulture—every major is represented within our dance company. It’s really cool to have all these students come together and use their alternative talents to create a professional, local show.”

Jessica Peña has broken a toe twice while dancing, so she knows  what she’s doing. Send her dance move  ideas at jpena@newtimesslo.com.

It's a big year for Cal Poly's Orchesis Dance Company. For the student dance company's 45th anniversary, they've brought out the big guns with their new show, Release. Director Christy McNeil and Co. have assembled 11 pieces featuring everything from a James Bond-themed number to a three-part finale set to the tune of Mumford & Sons. Enjoy!