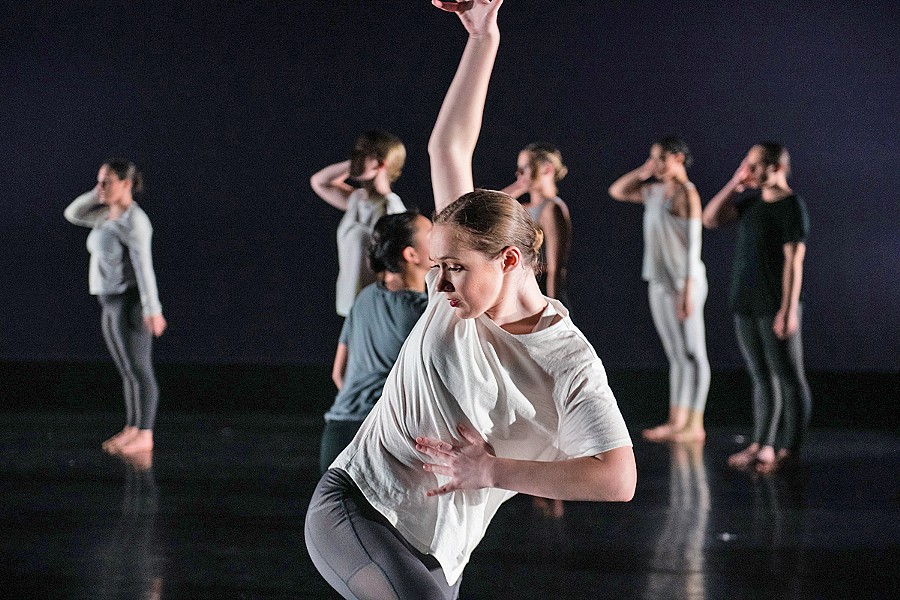 Photos Courtesy Of Brittany App FRONT AND CENTER Orchesis dancer Brianna Barnes moves to the music in a piece choreographed by Christy McNeil Chand. Clint Bryson is the lighting designer for this piece.

Founded in 1969, with its first dance concert in 1970, Cal Poly's Orchesis Dance Company started as an extracurricular club. But today, the group of 30 dancers is a full-fledged dance company, and the individuals in it must audition for the group.

This year, Orchesis celebrates its 50th anniversary with "50," a performance that pays tribute to the history and legacy of Orchesis Dance Company. The concert has 10 pieces total, each inspired by previous concert titles and program artwork, Director and Cal Poly Associate Professor Christy McNeil Chand told New Times.

While the pieces are not chronologically ordered, Chand said that she aimed to create a flow that would achieve "a good rise and fall through the concert." Even though each piece in the concert is separately choreographed, the final product is cohesive and tells a story.

"[Deyo] wanted to honor Moon Ja and the gifts that she's given to this university by starting this program and this company by putting her into this piece. It's a beautiful way to start the production," Chand said of the first dance, which features a fog element that spills out as the curtains open.

Following Deyo's piece, the next two pieces to take the stage are student-choreographed by dancers in the company, the first by Isabel Rangel and Marin Govett, and the next by Lindsey Eklund. These pieces are titled "Signatures in Dance" and "Continuum" and call back to the themes of the 2002 and 2010 Orchesis annual concerts, respectively.

The fourth piece, "Move on, America," takes the audience back to 1975 with a dance inspired by the company's fifth concert. Choreographed by guest artist Kathleen Helm, Chand said the piece is based on square dancing.

The three dances that follow Helm's piece are faculty led, the first by Orchesis Assistant Director Diana Stanton and titled "Transcend." Also a faculty member and assistant director, Michelle Walter presents "Concert in Motion" as the seventh dance in the concert. Both Stanton's and Walter's pieces feature dancers from Cal Poly's ballet and contemporary preparatory classes, which give students the chance to practice dance and perform in the annual show without being a company member. And in between these performances lies Chand's choreography in a piece titled "Echoes and Accents," a jazz-inspired dance. 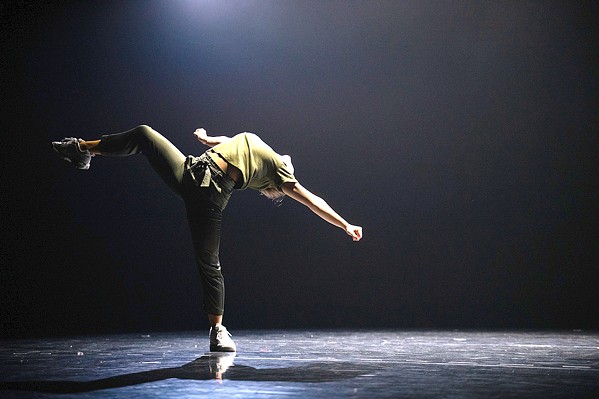 "The title evokes a lot of what is inherent in jazz," Chand said of that dance. "I created a piece on 11 dancers that played with the use of echoes and accents in their movement and their musicality, but also thinking about these echoes as significant periods of time, things that are repeated within your life, and then finding the accents, kind of like the milestones."

After "Echoes and Accents," two more student-led pieces feature the choreography of students Emily Chung and Evan Ricaurté, titled "Art of Dancing" and "Dance Perspectives," respectively. The 10th piece by guest choreographer Mike Esperanza, titled "Dances of the People," serves as the finale for the entire concert. His piece includes all 30 dancers from the company.

"He is a favorite every time he comes. The dancers always enjoy working with him," Chand said of Esperanza, who has set finales in past Orchesis concerts. "He always creates beautiful, luscious work that is full of gorgeous architecture and the use of space."

While each piece bears its own story, theme, or inspiration, Chand discouraged attendees from attempting to interpret the exact message behind each of the dances.

"All the pieces have meaning, but if you get wrapped up trying to find a storyline and narrative, you can miss the experience of just taking in the piece," Chand said. "Everyone might have a different interpretation. ... So I would say just enjoy the movement: Come enjoy the music, the creativity." Δ