If there’s one thing you can take away from Betty’s Summer Vacation, it’s that this is a play that is definitely not for everyone. Despite the fact that the performance has been advertised from the start as absurd, funny, and extremely disturbing—which it undoubtedly is—there were a few audience members who chose not to return to their seats for the second act on its opening night.

But don’t let that dissuade you from going to see this play, because despite some of the slightly unsavory contents of certain scenes, it’s pretty much a laugh riot from the very beginning.

The play, written by Christopher Durang and directed by Al Schnupp, takes place at a quaint little seaside cottage. The titular character and her chatty friend Trudy—played by Karlee Benner and Maddie Pomaro respectively—are renting two rooms for the summer, and find out they must share the space with a group of eclectic weirdoes.

There’s Keith, played by Jake Malloy, the awkwardly suspicious introvert who carries around a shovel and a hatbox full of … hats. Then there’s the sex-crazed, beer-guzzling lothario Buck (Jacob Corsaro) who carries around an album full of personal dick pics, and chases anything and anyone that moves. Next, there’s Mrs. Siezmagraff (Sarah Gamblin), the owner of the house, and Trudy’s alcoholic, verbally abusive mother who refuses to believe that her husband sexually abused her daughter. She’s so desperate for male attention that she brings home the first man she finds on the beach—a grimy flasher named Mr. Vanislaw, played by Kyle Palazzolo, whose favorite pastimes include hiding in women’s changing rooms, among other activities.

In addition, there’s a trio of voyeuristic, easily bored voices that come from the ceiling, played by Rachel Murphy, Jennie Casey, and Antonio Mata. The voices continuously beg for entertainment, and egg the characters on, trying to turn them against one another.

If it sounds zany, that’s because it is. It starts out with a harmless game of charades, and then quickly devolves into a crap ton of murder and dismemberment. Body parts are stuffed in the refrigerator, and a performance of a Law and Order-esque trial is put on to the delight of the demanding voices. 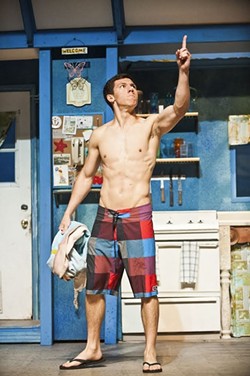 In a play like this, which has a lot going on, and deals with a multitude of disturbing topics—like an off-stage rape between two characters featuring uncomfortably clear sound effects—things could very easily go wrong.

But, hey, that’s what this play is.

Disturbing. And edgy. Durang originally wrote the play to make a point about the media’s penchant for sensationalized and lurid events, and the public’s obsession with the people who commit them. It’s supposed to make the audience uncomfortable.

The audience is lucky that the cast of Betty’s Summer Vacation is just talented enough to pull of the difficult subject matter. The whole cast excites and engages the audience with their slew of bad decisions and lowbrow behavior, but the two standouts of the play were Mrs. Siezmagraff and Buck.

Gamblin struts about the stage in brightly colored muumuus, spouting off insults toward her daughter with the voice of a Southern belle past her prime. In the aforementioned courtroom scene, Mrs. Siezmagraff inexplicably and hilariously begins to play all the roles: the lisping prosecutor, an Irish nanny named Mrs. McGillicuddy, as well as herself.

Corsaro brings some much-needed levity after some uncomfortable scenes when he bursts in and says things like, “Did someone say boobs?” Oh yeah, he’s chock full of one-liners that are guaranteed to make you groan and then laugh.

Betty, played by Benner, acts as the straight man to all of the other characters’ questionable antics. Sometimes, these characters can just come off as rather one-note and boring, but Benner manages to do a lot with what she’s given—especially when she finally breaks down after all the stress, laughing one minute and then crying the next.

This is not a traditional, feel-good type of play. It’s weird, it’s uncomfortable, and it’s dark. But I, for one, enjoyed it.

Intern Adriana Catanzarite wants to eat food at the banquet. Send her Twinkies via Arts Editor Jessica Peña at jpena@newtimesslo.com.