With all of the new photography technology that’s available—Instagram, Photoshop, phones that function as cameras—it seems like everyone fancies themselves a photographer. Just press a few buttons, and voila!—a digital photograph of your selfie that looks perfectly retro. But for seven photographers, Instagram filters just aren’t enough.

Photography Now, the new exhibit at Cal Poly’s University Art Gallery features the work of seven artists from Northern California who all combine uses of modern digital technology with historical processes. Jeff Van Kleeck, the gallery coordinator at Cal Poly, says that he hopes that people come away inspired to experiment with ideas and processes.

“What is interesting to me is the use of both contemporary and historical photographic processes to make the final images. There are a lot of ways to get to the final image you have in your head, and sometimes the less obvious one is the most interesting,” he said.

Kathleen McDonald, a graduate student at San Jose State, is one of the featured artists in the exhibit. Her photographs feature close-up images of faces and various patterns, printed over diaphanous, colored silks that are hung up for display in the university’s gallery.

“My first inspiration was my mother who was the first of her family to go to university,” McDonald said. “After that, much of my inspiration comes from my West Indian culture, the botanicals, and the environment of the island. I also draw inspiration from the culture of the indigenous peoples of the Caribbean, and because of this, my work sometimes carries a critical undertone of colonialism.”

McDonald allows visitors to walk among her fluttering silk photos, with an audio track of West Indian music playing in the background. The photos seem slightly subdued over the pastel colors of the silk, but the images look like something out of a fairytale. McDonald says that she never uses just one process with her work.

“I use whatever media necessary to complete the conceptual idea,” McDonald said. “But alternative process is one of the mediums I use constantly in my work. My biggest concern as an artist is to allow the audience to experience the space, to allow them to react and respond to it. Because my work deals with issues of multiculturalism and identity, it is the experiential part of my work that I hope my viewers respond. For them to be allowed to relate to my work in their own way, but then uncover specific details of the West Indian region, is important to me. Much of my work surrounds themes of the melting pot that is the Caribbean and how my personal identity is impacted as a West Indian living abroad. In Cultural Synthesis [her series of photographs], I allow the audience to walk within and around the silks that shimmer and ripple—a reaction to the bodies that brush by. The audio allows the audience to be surrounded by the sound of the sea and the poetic mantras of people of the West Indies. The installation acts as a metaphor for the evolution of a culture within the self.”

Daniel Herrera is another one of these photographers. An adjunct professor of photography at American River College and the Art Institute of California, Sacramento, Herrera incorporates digital imaging with gum biochromate printing. The process stems from the early days of chemical photography in the mid-19th century. It’s a labor-intensive system that involves layering each individual color over the negative of the image. The end result is a picture with saturated, slightly muted colors, and the dream-like quality of a painting. 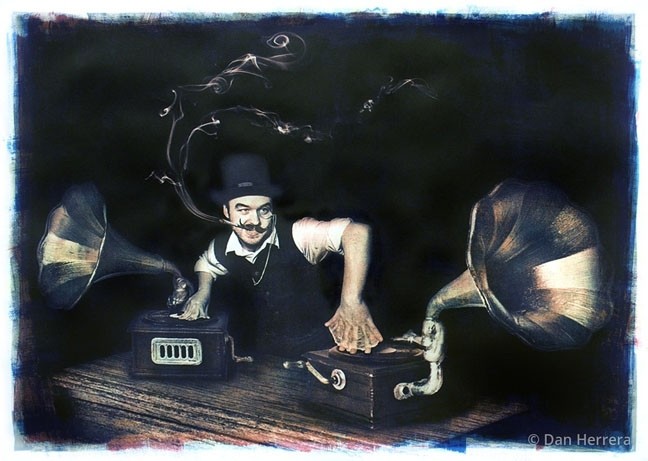 “My images in the Photography Now exhibit employ a wide gamut of photographic processes,” Herrera said. “I like handmade photography, because no two prints are identical, and each carries its own magic. Gum printing allows me the ability to make gestural effects in the final steps of development that enrich my exploration of distinctions between photographic realism and painterly illusion.”

Herrera begins his process with a sketch of an idea. He then constructs miniature sets created out of found objects and photographs them, and digitally combines the set photographs with ones of people and life-size props. One of his pieces called Wax Tickler features a mustachioed man—replete with a top hat and monocle—spinning records on old phonograph machines with webbed hands. Another of his images has a woman in a red dress dancing with a squid-man. It may be a little odd, but it’s exactly that peculiarity that keeps you looking at the photograph.

“I’m more interested in making cool imagery, and if people connect with it, that’s great,” Herrera said. “The images are obviously narrative, but I try to make things ambiguous enough to leave room for other people’s interpretation.”

Intern Adriana Catanzarite knows all about the Instagram. You can contact her via Arts Editor Jessica Peña at jpena@newtimesslo.com.