Medical marijuana advocates around the state recently exhaled a giant sigh of relief.

On Oct. 9, Gov. Jerry Brown signed a long-awaited set of bills that will establish a comprehensive regulatory framework for medical marijuana in California. State lawmakers passed the legislative package—which includes AB 266, AB 243, and SB 643—on Sept. 11, the last day of California’s legislative session. 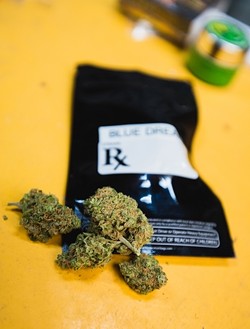 “This new structure will make sure patients have access to medical marijuana, while ensuring a robust tracking system,” Brown wrote in an Oct. 9 signing statement. “This sends a clear and certain signal to our federal counterparts that California is implementing robust controls not only on paper, but in practice.”

A fundamental piece to the new laws is drawing much attention from local medical marijuana providers. In order to obtain a state license for medical marijuana, a business must first have a permit or some sort of authorization (which could include a business license) from their locality. How that requirement will play out is unclear. Currently, every city in SLO County has banned brick-and-mortar dispensaries, and a handful have banned mobile dispensaries. SLO County has yet to approve a permit for a dispensary to operate in the unincorporated areas. The Board of Supervisors will be considering an appeal for a Nipomo dispensary permit at its Nov. 3 meeting.

These new laws will not apply to the Nov. 3 decision.

The majority of the new standards set by California Medical Marijuana Regulation and Safety Act won’t take effect until Jan. 1, 2018. Local and state agencies, however, will begin to prepare a mechanism for permitting the range of activities relating to medical cannabis.

During a bi-annual meeting to review the county’s overall planning priorities, Jim Bergman, director of the Planning and Building Department, told the Board of Supervisors on Oct. 13 that his department will be looking for direction on how to approach this process. That may take the form of an ordinance, or some other framework that details what exactly local control of medical marijuana permitting will look like.

Bergman told the supervisors that this was both a significant and urgent issue to consider.

“This seems to be a pretty big deal to me,” Bergman said. “[The planning department] will need to come to the board relatively quickly to try to make sure that we have clarity in the county policy for this.”

Cities in SLO County will likely follow suit to determine how to treat medical marijuana within their jurisdictions.

One major question that local officials will ask is where does local control end: Basically, does a locality have the ability to ban brick-and-mortar or mobile dispensaries, or does the ability to regulate the industry exclude the option of an outright ban?

Nate Bradely, president of the California Cannabis Industry Association, which lobbied for passage of the new laws, is optimistic.

Bradley told New Times that throughout the state, several localities banned medical marijuana in order to avoid getting drawn into the legal gray area between state and federal laws, or because there were no clear ways to regulate the activities within their jurisdiction. Now, the law will be a bit more clear for cities.

“We opened the door to make it easier for local governments to regulate it if they want to,” Bradley said.