California meets Italy: Etto Pastificio is a one of a kind around these parts

Italians eat pasta by the etto

An etto represents just the right portion of pasta for one person, whether it's a primi or part of a meal. Etto is a family-owned pasta shop, with local and Italian-sourced food products, and certo, fresh and dried pasta made from quality, organic ingredients. Etto Pastificio is located at 3070 Limestone Way, Paso Robles. Call (805) 400-3193 or email ettopasta@gmail.com. Open Sunday to Wednesday, 9 a.m. to 5 p.m; Thursday to Saturday, 9 a.m. to 6 p.m.

Finalmente, we have our own bite of Little Italy, in Tin City no less, and it's as authentically Italian as Lidia Bastianich's red sauce—so right on, in fact, that people whose favorite food is pasta need to make Etto Pastificio a weekly stop if it isn't already.

On Saturday, June 29, Etto is toasting their one-year anniversary. They definitely have reason to celebrate. They are the only pastificio in the county. They are also the only pasta factory out of only a few in California (and correct me if I'm wrong) that use organic durum semolina. 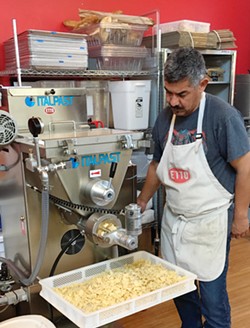 Old-school Italians, foodie purists, wannabe expats romantically obsessed with Italian culture (me), and parents looking to nourish their carb-loving bambini (also me) are among their clientele. My son Tony loves Etto ravioli and cream sauce so much that he goes back for fourths.

The last time I tasted pasta this fresh was when I lived in Italy, and each week we'd travel down the mule path to the pastificio, the pasta factory, where white noodles hung in the windows, just like the laundry lines hung outside every green-shuttered stone home. When I begrudgingly moved back home, I missed the fresh pasta shops the most.

Etto's pasta is SLO County's culinary missing link. Owners and winemakers Brian and Stephanie Terrizzi aren't like the Italian Italians, who keep their pasta-making secrets locked up like Vatican museum artifacts. On the contrary. Visitors, schoolchildren, and locals can come to Etto and witness the pasta-making process front and center.

Floury nests in all shapes and shades of white decorate the counter top. Thick bucatini, lacy trombe, shelled radiatori, and tubular ziti—and sheets of lasagna noodles and trays of neat little ravioli, too. All of it made from Central Milling Company's premium organic durum semolina flour, a people-powered artisan milling outfit out of Utah that dates back 150 years. 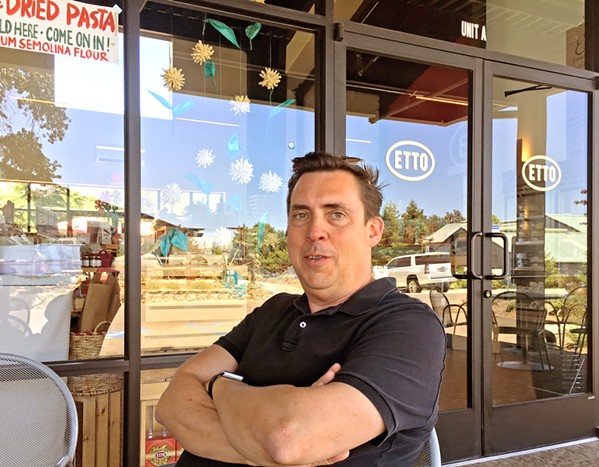 "Pasta is good for you," Brian says, adding that it's because of the quality of ingredients. "People don't think it's good for you, but it is. Especially for kids. It's low glycemic, high in protein."

He equates buying pasta at the grocery store to eating bleached, enriched Wonder Bread. Their philosophy is that pasta is simple and unpretentious, but it's also "complex, nutritious, and distinct." 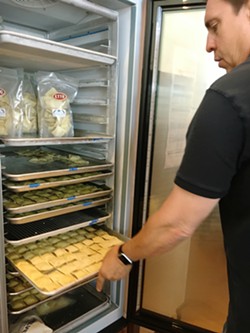 They stock high quality ingredients, fresh, clean food, as organic as possible—because even if the farm is not CCOF certified, they might still be practicing organic. Being Sicilian, Brian is not about to eat tomatoes when they're not in season, so for the other seasons, he has jars and cans from Italy.

"We have a lot of tomatoes," Brian explains. "Everything from domestic, organic tomatoes that are grown right up the road, to tomatoes from small family farms in Italy that are hand peeled. It gives folks the ability to experiment with different flavors."

In addition to also being the owner and winemaker of Giornata and Broadside wines, Brian co-owns the half-a-year-old Tin Canteen restaurant next door, which features his pasta. Brian's a bit of a fixture in Tin City. He knows everybody, and he makes sure they are fed. He embodies the Italian spirit. He and Stephanie, whom Brian lovingly calls "Stephy," have taken many trips to Italy to visit pasta factories and gather intel.

Brian takes the Sicilian from his father's side, but Brian grew up in Cincinnati. He developed his passion for Italian food and culture from his grandma, whom he spent a good deal of time with in the kitchen growing up. She made the best and first ravioli of Brian's life, and would always feed him good food. The amaretti cookies in the tall red and white tin near Etto's register remind him of her. 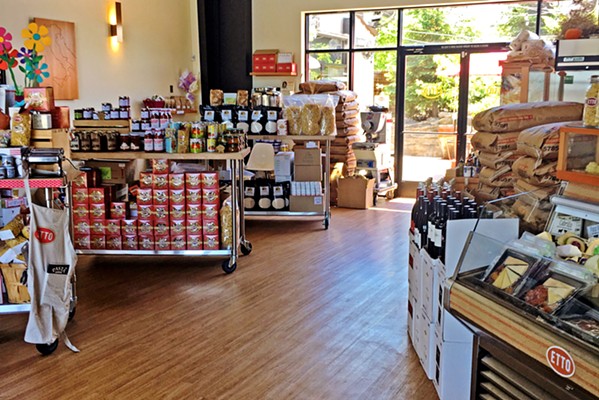 Brian talks constantly about how to bring even more of Italy to us. He mentions his wife's idea of an espresso window and we talk about the prospects of cannoli. And if a customer tells him he needs a specific type of anchovy, Brian will make it happen.

"I figure if one person likes it, someone else is gonna like it," he says.

Brian estimates that about 4,000 people eat Etto pasta each week.

"We make pasta six days a week and we never really have enough," he says. "We're running out."

He may have to work to sell his wine, but when it comes to pasta, the people come to him. One chef tells another chef and then, boom, you see Etto pasta at 20 different restaurants in SLO. Like I said, Etto needs to be a weekly stop. Δ