With more than 75 unrecorded original tunes under his belt, longtime local singer/songwriter/guitarist James Paul Dyer felt inspired to comply with a request his sister made at last year’s family Christmas dinner. After months of painstaking recording and a total of 1,400 hours at Parkhill Studios in Santa Margarita, the result is clear: his new CD, Streets of California, which features 11 of his finely crafted ballads and instrumentals, all inspired by love, life, and a broken heart.

With a soothingly smooth baritone and a classical-guitar-inspired fingerpicking style, James Paul Dyer has been performing professionally since he was just 16. Longtime locals will probably recognize him for his performances at many downtown SLO watering holes over the decades, including Ethel Red’s and the Cigar Factory.

“I’ve played just about every club in this county,” Dyer says with a characteristic laugh. He’s been a familiar face in local bands including the New Five Cents, Saginaw, and Sage.

One of his tunes, “In My Dreams,” is being released as a single and is already attracting interest from radio stations in Australia. Another song, “The Window of Your Eyes,” is dedicated to his late parents, Leon and Ann Dyer (of Leon’s Books).

Dyer says he’s especially pleased with the reaction his new CD is evoking in music fans. His website, jamespauldyer.com, displays some of the testimonials, with comments such as “thanks for the grace in your melodies and the wisdom in your lips,” and “your music is soothing to my savage soul.”

His CD is available at Boo Boo Records in downtown SLO, at his website, and from CDBaby; individual songs can be digitally downloaded at iTunes and Napster. If you’d like to hear a live version, James Paul Dyer and the Streets of California Band will perform all the songs from the recording on Saturday, December 27 and again on Saturday, January 3 at the cozy Last Stage West, on Hwy. 41 West between Morro Bay and Atascadero.

Opening the show at 6 p.m. is singer/songwriter Stephendipity, followed by the Chip and Dale Review (“if you don’t put money in the tip jar, we’ll take our clothes off!”) at 7 p.m. Dyer and the Streets of California Band take the stage at 8 p.m. for a no-cover, donations-accepted show.

Waggin’ it with the Dogs

One of the Central Coast’s biggest local musical success stories is the versatile ensemble the Mighty Croon Dogs, now celebrating 14 years of pumping out danceable grooves from just about every musical genre known to humankind.

Throughout the Croon Dogs’ long career, one thing rings with truth, he says: “Music brings people together, just like in the tribal days. It really doesn’t matter what kind of music. You can use music at the level you feel comfortable with. Some people listen deeply, some just want background for their conversation, and some want to groove out on the dance floor.”

He pays tribute to the great local clubs that offer free live music every night of the week—and keep local musicians like him solvent—such as the Otter Rock Café in Morro Bay, the Cambria Pines Lodge, and Harry’s in Pismo Beach, places that cater to locals but attract out-of-town visitors as well.

“These places are our bread and butter, especially on weeknights. The local musicians really appreciate it. Local music fans know they can get out of the house when they have cabin fever, and mess up someone else’s place! I’m very thankful for these places, and for the people who come out to support us,” says Foppiano.

The Mighty Croon Dogs come unleashed at the historic Paso Robles Inn on Friday and Saturday, December 26 and 27. The band—which includes bassist Frankie Paredes, drummer Jerome Taylor, and saxophonist Scott Wright, along with Foppiano—will be pumping out some tail-waggin’ tunes for New Year’s Eve on Wednesday, December 31 at the Otter Rock. Check out their newest recordings at mightycroondogs.com.

Party at the Playhouse

Every year, New Year’s Eve is a special occasion at the Pewter Plough Playhouse  in Cambria, and this year promises a touch of the Moulin Rouge in the town of pines.

The nonstop entertainment at the playhouse (Main Street and Sheffield) on Wednesday, December 31 begins at 7:30 p.m. with the final performance of Have a Hart!, an original musical devoted to the songwriting genius of Larry Hart. Who’s he? Half of the famous Rodgers and Hart team that penned some of Broadway’s best-loved songs, that’s who, including “My Funny Valentine,” “Blue Moon,” “The Lady is a Tramp,” and many more. The show features more than 40 of Hart’s great tunes, and five cast members, including the legendary Jim Conroy (who, by the way, is about to release a solo CD, Songtree).

After the show, cast members join David and Delilah in the café from 10:30 p.m. until the wee hours, featuring the diverse vocal stylings of Delilah Shank and piano man David Manion singing and playing favorite pop, jazz, and big band tunes.

This elegant evening also includes a buffet, plenty of Korbel champagne, and of course party hats and noisemakers. Tickets are $120, and you can reserve yours by calling 927-3877 or by visiting pewterploughplayhouse.com.

More music to ring in the New Year

What would “Auld Lang Syne” be without live music? For your New Year’s Eve celebration, you’ve got your pick. In addition to the free party at Morro Bay’s Otter Rock with the Croon Dogs, and the rather pricey party at Cambria’s Pewter Plough Playhouse with a musical play and jazz, here are some more live music choices for your listening and dancing pleasure on Wednesday, December 31: Shameless at the Cambria Pines Lodge 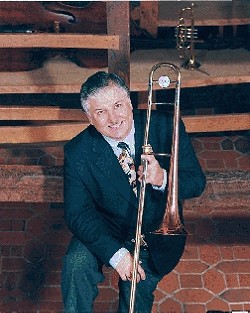 Peacock Room, no cover; The Novas at Mozzi’s in Cambria, no cover; Marty René and the Regulars at the Ranch Restaurant and Honky Tonk in San Miguel, $5; The Jammies at Mongo’s in Grover Beach, $10 including a T-shirt; the Zongo All-Stars at Sweet Springs in Los Osos, $10; ; Louie Ortega and the Wild Jalapeños with the West Coast Horns at the Cliffs Resort in Shell Beach, $45; a ‘60s rock ‘n’ roll dinner and dance with Unfinished Business at St. Patrick’s School, 900 W. Branch in Arroyo Grande, $60 including dinner. May as well welcome 2009 and kiss 2008 goodbye on the dance floor!

Any day of the week

One of the most enjoyable new local musical ensembles from the past year—at least for fans of the honey-sweet harmonies of women’s voices—has got to be Chick Tuesday, featuring the lovely vocals of Sharon “Buffy” Doran, Karen Wilkins, and Sarah Jane Weiss. Occasionally rounding out these lilting, lovely ladies and their dulcet tones are bassist Geert de Lange and resophonic slide player Frank Duncan.

“We always see people in the audience mouthing the words, or sighing and saying, ‘I love that song.’ They just love hearing the old stuff in three-part harmony. That fills a void in this county,” says Wilkins, former keyboard player and vocalist of Life At the Top.

“Everybody loves Joni Mitchell and the Beatles. Throw in Dan Hicks and Little Feat, along with Neil Young, Carole King, and Crosby, Still, and Nash, and it’s so enjoyable! This music feeds the soul. That’s a cliché, but there’s so much passion in the songs we do, the harmonies sound so incredible, we don’t want the song to end,” she adds.

The women started singing together in a Santa Margarita backyard every week on Tuesdays, just for fun, and Chick Tuesday was born. Sharon “Buffy” Doran brings her experience as a vocalist with the Viper Six and formerly with the Mighty Croon Dogs and Jill Knight, while her longtime friend Sarah Jane Weiss has been singing and playing flute since early girlhood.

Starting in springtime, Chick Tuesday will play the first Sundays of the month at Pozo Saloon.

Wow, for more than a quarter of a century now, the local nonprofit volunteer-run San Luis Obispo Blues Society has been bringing great blues players from around the U.S. to our little neck of the woods.

“Our mission is to bring in national acts at affordable prices, in a venue where people can dance,” says Sara Kocher, booking agent for the Blues Society. “And if you can’t afford the ticket price, you can volunteer.”

The SLO Blues Society recently received an Art Inspires! grant from the SLO County Community Foundation, with a goal of attracting new people to come to the blues shows at the SLO Vets Hall.

Mark your calendar for Saturday, January 24, when contemporary blues great Kenny Neal brings his New Orleans-infused southern blues to town. Visit the website at sloblues.org to sign up for the free (snail-mail) newsletter.

The next Famous Jazz Artist series at the Hamlet, just north of Cambria on Hwy. 1, features trombonist Dan Barrett, who’s considered one of the country’s leading exponents of the swing-era style of jazz. Dan Barrett performs on Sunday, December 28, when he’ll be joined by bassist Luther Hughes, drummer Steve Barnes, and series co-producers Charlie and Sandi Shoemake, on piano, vibraphone, and vocals. Two shows are planned: 4 p.m. for $15, 7:15 p.m. for $12, or see both shows for $20. For reservations, call 927-0567.

Contributor Kathy Johnston silently sings her heart out. Catch a tune at kjohnston@newtimesslo.com.