California's drought intensifies as the governor declares a state of emergency 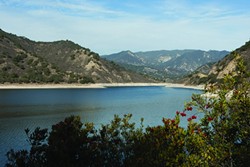 It’s no secret that a drought has engulfed California. On Jan. 17, Gov. Jerry Brown declared a drought state of emergency, which has added to the stir and comes as an order from the top for residents and state agencies to begin acting accordingly.

The declaration calls for 20 percent across-the-board water use reductions and gives state agencies more flexibility to address water needs. Pointing to record low rivers and reservoirs, a snow pack measured at 20 percent of normal levels, and the extremely low rainfall totals, the declaration marks a call to prepare for more of the same.

“We can’t make it rain, but we can be much better prepared for the terrible consequences that California’s drought now threatens, including dramatically less water for our farms and communities and increased fires in both urban and rural areas,” Brown said in a press release.

For San Luis Obispo County, which has seen significantly low rainfall and has already been dealing with water concerns, the situation isn’t exactly news. Agriculturists and rural residents have seen new well moratoriums, and ranchers have seen very limited livestock feed, with many of them resorting to buying expensive supplemental feed or prematurely selling off their cattle.

One of the most visual depictions of the drought’s severity—especially in San Luis Obispo County—is the U.S. Drought Monitor Map. The map, updated weekly, is produced as a joint effort between the National Oceanic and Atmospheric Administration, the U.S. Department of Agriculture, and the National Drought Mitigation Center.

The color-coded map shows drought classifications across the Untied States. The Aug. 13, 2013, map showed all of San Luis Obispo County, southern Monterey County, most of Santa Barbara and Kern counties, and pieces of surrounding counties classified as D-3, or extreme drought. At the time, these were the only areas in red. By Nov. 19, the red had spread to the Central Valley. Jan. 14’s edition—which came the same week as Gov. Brown’s declaration—showed most of California engulfed the color.

The drought has been approaching since the fall of 2012, when San Luis Obispo County went from a D-1 classification, or moderate drought, to D-2, or severe drought. Then in the fall of 2013, the county was placed in D-3, or extreme drought, and stayed there ever since.

The news that 2013 was the driest calendar year in California’s history may not yet reveal the extent of the issue.

John Lindsey, Pacific Gas and Electric spokesperson and a meteorologist who’s widely regarded as an authority in weather forecasts, said that another way to look at the situation is to evaluate weather patterns during a rainfall year, recorded from July 1 to June 30. While a calendar year may be dry, the December of the previous year or the January of the next may be wetter than normal, making the rainfall year a more accurate depiction of annual totals. For San Luis Obispo County, a very dry January following a dry November and December puts the rainfall year as of now off the charts, even when compared to previous dry times.

“It’s literally just smashing the records of any other years that we’ve seen before,” Lindsey told New Times.

He added that there’s a possibility for relief in February if some of the influential weather patterns shift, bringing a chance of rainfall. As the numbers show, however, the drought may not be heading out of town all that soon.

“We should be close to about 13 inches by now, and we only got an inch,” Lindsey said.