By Kasey Bubnash and Malea Martin

The once unified call for a distinct Central Coast region separate from Southern California is becoming increasingly disjointed as COVID-19 cases and hospitalizations in San Luis Obispo, Santa Barbara, and Ventura counties continue to rise. 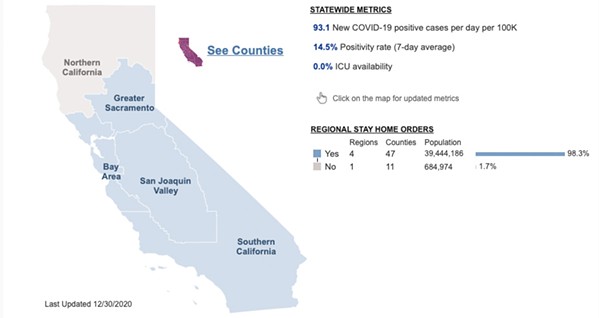 On Dec. 29, Gov. Gavin Newsom announced a three-week extension of his Dec. 6 stay-at-home order in Southern California, just as SLO County Public Health reported its highest number of hospitalizations—59, including 12 intensive care unit (ICU) cases—so far in the pandemic. Public Health officials say 36 SLO County residents have died of COVID-19 since the start of December, adding up to nearly 50 percent of the county's total coronavirus-related deaths.

"This pandemic is taking a human toll here in SLO County and we need every single person to do everything you can to stop the surge and protect the lives of those around us," SLO County Public Health Officer Penny Borenstein said in a Dec. 29 press release.

The Southern California region is part of a new state system for tracking and slowing California's exploding cases of COVID-19, a process that splits the state up into five regions where stay-at-home orders are triggered when the area's ICU availability drops to or below 15 percent. Gov. Newsom outlined the new method at a Dec. 3 press conference, and including the the Central Coast in the Southern California region, which encompasses 23 counties, sparked immediate pushback from local community members and public health officials.

At the time, the Tri-Counties were collectively faring significantly better than the rest of Southern California, and in a Dec. 7 letter addressed to acting state Health Officer Erica Pan, public health officers and directors in SLO, Santa Barbara, and Ventura counties wrote that "the utilization of such a large and diverse regional assignment is not reflective of the risks for our Central Coast area."

Now, while the Southern California region as a whole has 0 percent ICU capacity, SLO and Santa Barbara Counties have 35 combined ICU beds available, lower than what was available between the two counties at the beginning of December.

Still, some elected officials are continuing their push for a separation of regions. In a Dec. 22 letter to Gov. Newsom, several state senators and Assembly members, including Assemblyman Jordan Cunningham (R-San Luis Obispo), requested once again that a new region be created for the Tri-Counties. Cunningham posted the letter to his Facebook page on Dec. 30 and wrote that lumping the Central Coast in with SoCal "still makes zero sense."

"Glad to be a part of a regional, bipartisan group of legislators who represent SLO, Santa Barbara, and Ventura counties asking the governor to group the three counties into a new Central Coast region," Cunningham wrote. "This would better represent the true local situation and allow some of our businesses to reopen."

Michelle Shoresman, a spokesperson for SLO County Public Health, wouldn't say whether the state had officially responded to the Tri-Counties petition or if the Tri-Counties still want to create their own region. But Santa Barbara County Public Health Officer Dr. Henning Ansorg said in an interview with New Times that splitting from Southern California is no longer a priority.