Rock to a benefit for the Boys and Girls Club!

My pal Tony Balbinot of the Cadillac Angels is a real humanitarian. He’s always playing benefit shows or recording albums whose profits go to one cause or another. He shows you don’t have to be rich to make a difference, and now he wants to make a difference for the Boys and Girls Club of Oceano, which offers after-school programs for at-risk youth. 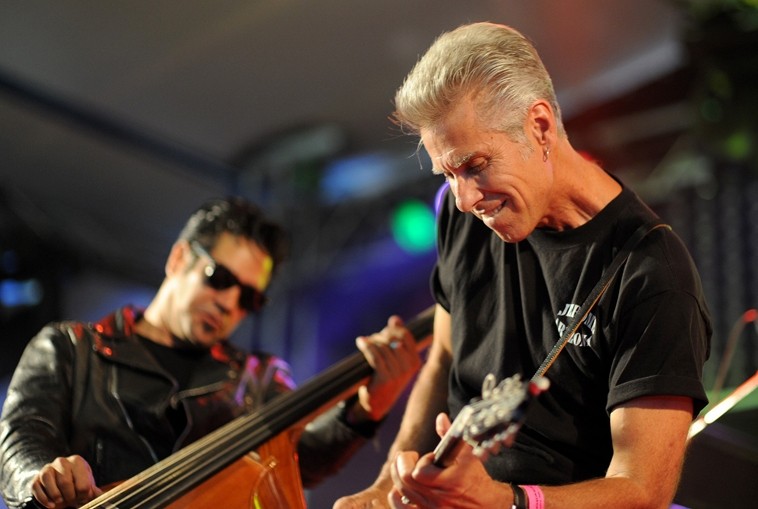 “After the Sandy Hook shooting, it got me to thinking about kids and how precious yet vulnerable they are,” Tony said. “I wanted to do something on a local level to draw attention to children and how they really belong to all of us in a way. A small investment in organizations like the Boys and Girls Clubs gives back such a high return to our society.”

On Saturday, March 2, with the help of local music guru Madeline Royal, Tony has gathered together four bands to play the SLO Grange Hall (2880 Broad St.) starting at 6 p.m. (doors at 5 p.m.) The show is all ages and free, but donations will be gathered by passing the hat throughout the show.

“This was my brainstorm in the beginning, and then a business associate, Madeline Royal, just jumped in there and really got things moving,” Tony said. “Madeline is providing funding for the sound gear and personnel.”

Hotrodders are encouraged to bring their kustoms, hot rods, and bikes to fill the lot and enjoy a great show for a great cause. The Boys and Girls Club will be selling food and drinks.

Amazing harmonica-playing bluesman Rod Piazza & the Mighty Flyers return to town on Saturday, March 2, at 8 p.m. at the SLO Vets Hall for another SLO Blues Society concert with The Cinders opening (7:30 p.m. dance lessons, 21-and-older; $20 at the door, or $17 for society members).

Piazza got his start in the ’60s fronting The Dirty Blues Band, but his style was formed as a kid in the ’40s listening to such mentors as George “Harmonica” Smith, Sonny Boy Williamson, and Little Walter. In the early ’70s, he and Otis Spann-disciple Honey Alexander (now his wife) teamed up, and in fact the core of his band the Mighty Flyers has been together for more than three decades. As you can imagine, they’re tighter than a virgin’s daughter.

With two dozen albums out, thousands of gigs performed worldwide, and just about every blues award you can win, this is one amazing band that plays a “combination of low-down Chicago grit, suave West Coast swing, and the rhythmic drive of the best early R&B and rock’n’roll.”

When it comes to cover bands, there are good ones, great ones, and ones that dive so wholeheartedly into the material they cover that they can make an audience forget they’re watching a cover act. That’s the sort of polished, professional, reverent work Unfinished Business does.

The band formed in 2003 and has been delivering the best of ’60s rock’n’roll to audiences all over the Central Coast, and now they’re ready to deliver their debut album featuring ’60s classics such as “Knock on Wood,” “Day Tripper,” “Honky Tonk Woman,” “Surfin’ USA,” “Barefootin’, “Baby It’s You,” and—hey, I’m just moving down the album’s titles. You’ll recognize every one of these tracks.

The musicianship is top-notch, and it comes from guys who played in the ’60s as kids before setting their musical careers aside to get “real” jobs and raise families. Now that they’re free to pursue music again, they’re naturally playing the music they loved in their youth.

Featuring drummer David Hollister, bassist-vocalist Jim Witt, rhythm guitarist-vocalist Ben David, and lead guitarist-vocalist Ed Miller, the quartet has let one “young guy” into the line-up—keyboardist Thomas “Toes” Cuff. Together, they’ll give you that “Good Lovin’,” “No Matter What,” so “Come Together,” let them “Light My Fire,” “All Right Now.”

On Saturday, March 2, SLO Brew is host to Carrie Rodriguez (7:30 p.m. doors; all ages; $8 presale or $10 at the door), with Girls and Boys opening. Rodriguez is a fine Austin-based fiddler and singer-songwriter. About her album Give Me All You’ve Got, she said, “I’m laying out some extreme emotional highs and lows, which feels good. Take ‘Brooklyn’ [co-written with guitarist Luke Jacobs]. It’s very autobiographical, and I remember thinking, would I really want to share this? I decided, of course, why hold this back? It’s something that a lot of people can relate to—the acceptance of failure in a relationship, learning from it, and moving forward.”

As for Girls and Boys, “We’ve recently relocated from SF back to SLO after being in the Bay Area for eight years,” said guitarist Josh Barrett. “We’re currently breaking into the local scene as well as touring and writing new material. The KRUSH 92.5 and KCBX 90.1 have songs of ours in regular rotation now, which has helped us get our music out in the area. We’ll be performing this gig as an acoustic duo: Brianna Lee on vocals and me on acoustic guitar. We’ve been busy this year with lots of new developments. We were recently selected to play the Bottle Rock Fest in Napa. We’re thrilled to be playing with such a stellar lineup! We have been gaining fans and momentum while touring up and down California.”

On Sunday, March 3, check out The Stone Foxes (7:30 p.m. doors; all ages; $8 presale or $10 at the door), with Vacant Shapes opening. The Stone Foxes are a Bay Area band featuring brothers Shannon and Spence Koehler and Aaron Mort. I listened to their song “Stomp,” and it was all jangly, clapping, tambourine-shaking, shout-vocals fun, with banjo, harmonica, and slide guitar. Cool stuff! They used to be called Monster Eats the Pilot, but now the garage rock trio is called Vacant Shapes.

On Tuesday, March 5, Ryan Bingham hits the Brew (7:30 p.m. doors; all ages; $25 presale or $27 at the door), with honeyhoney opening. Bingham is an Oscar-winning singer-songwriter whose newest album is Tomorrowland, about which he said, “Maybe it’s not so much about looking ahead as it is  about leaving things behind.” He’s got a great raspy, gritty voice. Los Angeles duo honeyhoney mixes alt-country, soul, folk, and pop.

Finally, on Wednesday, March 6, SLO Brew brings a double bill, The Ready Set and Outasight (7:30 p.m. doors; all ages; $16 presale or $18 at the door). Both of these polished pop acts are guaranteed to make the teenyboppers swoon.

Also on Thursday, Feb. 28, check out country act Mehrten Drive playing Frog and Peach from 8 to 11 p.m. The event kicks off its “Central Coast Album Release Tour,” promoting their new album The First Round. “We are not a cover band, so expect to hear original songs that you’ll find yourself singing well after the music has stopped,” said the band in press materials. “We got started October 19, 2010, and were off and running. With two guitars, two vocalists, bass, and drums, the band is big and so is the sound. Mehrten Drive looks forward to bringing our original sound to this valley and anywhere else it takes us. So come check us out, and bring your dancing shoes.”

Billing their sound as “American roots with European passion,” Beppe Gambetta (guitar and vocals) and Peter Ostroushko (mandolin and fiddle) are an Italian and a Ukrainian-American who have joined forces to play roots, jazz, and folk music. They play two SLOfolks concerts for the week: Friday, March 1, at 7 p.m. in Coalesce Bookstore (772-2880; $20), and Sunday, March 2, at 7:30 pm. at Castoro Cellars (238-0725; $20).

I got a little note from the Appellation Bluegrass Band: “To all of y’all who love picking and picnicking—and dogs, we invite you out to the coast for some ‘raditional (traditional-radical) mid-day musical and seafood fare. The music kicks off at 10:30 a.m. on Sunday, March 3, outdoors at Tognazzini’s Dockside, and the bluegrass joy lasts until 2:30 p.m. It’s free to y’all and your dogs ... tips greatly appreciated.” Rain cancels the show.

Pianist Tom Ranier performs a solo recital on Sunday, March 3, for the next Famous Jazz Artist concert at D’Anbino Wine Tasting Room at 4 and 7:15 p.m. ($15 each, or see both for $20; reservations are recommended by calling 927-0567). The Los Angeles Times calls Ranier “one of the West Coast’s consummate jazz piano artists.” Though he’ll be performing a solo recital, series co-producers Charlie and Sandi Shoemake will join him for a few selections.

Geesh, has it been five years since guitar wiz Toan Chau started as host of the Monday Night Open Jam at the Frog? Why, yes, it has, so to celebrate what’s become known as the Frog Jam, Toan has invited a stellar line-up to play on Monday, March 4, starting at 8 p.m. The following performers will each play a five-song set: the Allison Rice & Jayson Jones Duo, Erin Inglish, Pitch & Rhythm, The Push Back, The Incrementals, The Gypsy All-Stars, and St. James Infirmary. “At the end of the night, we’re all going to do some spontaneous random jams with all the musicians who are still hanging out,” Toan said. “This is a free show.”

According to Cal Poly Arts, “On Tuesday, March 5, at 7:30 p.m. in the Performing Arts Center’s Cohan Center, Cal Poly Arts presents ‘British Isles of Wonder,’ featuring the pipes, drums, and Highland dancers of The Black Watch 3rd Battalion and the Band of the Scots Guards. The colorful, cultural spectacle is renowned for its thunderous sound, complex drills, and ability to evoke the mysterious beauty of its ancient, honor-bound calling of service to the Royal Family.” The Black Watch formed in 1725 and has a long and distinguished history of policing the Highlands as well as serving in posts all over the world. Cal Poly professor Ken Habib offers a free 6:30 p.m. lecture in the PAC Pavilion. Student and adult tickets range from $30 to $64 (756-4849). This will be a high-volume show, so earplugs are recommended.

Aaron Lee Martin plays Linnaea’s Cafe on Wednesday, March 6, at 7 p.m. The singer-songwriter hails from America’s heartland and says he “has an indomitable passion for music.” Expect country-folk music and “heartrending balladry.”

Local ’60s surf rock icon Merrell Fankhauser recently teamed up with another ’60s surf rock icon, Dean Torrence of Jan & Dean, during a Feb. 9 Surf City All Stars concert, but if you missed it, tune into Fankhauser’s TV show Tiki Lounge on Sunday, March 2, at 7:20 p.m. on Channel 2 and see what you missed! Merrell joins the band for three songs on the encore!