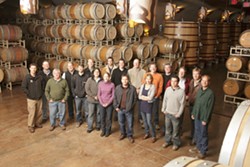 Why don’t wine varieties like Counoise, Mourvedre, and even Syrah have the cachet among Americans that other varieties do? Is that just because it’s easier to say Merlot or Chardonnay, instead of trying to pronounce a word that’s foreign to our lips? Whatever the reason, it keeps Rhone wines from becoming as mainstream as Cabernet Sauvignon. But that only fuels Rhone specialists: Most of them become zealots about marketing their wines.

They will do anything to promote the varieties they deem superior to all others, no matter how foreign, exotic, or abnormal they may seem to uneducated wine drinkers. In fact, the best Rhone-focused events in America take place in Paso Robles, this year including the renowned Hospice du Rhone (HDR), which will celebrate its 17th anniversary on May 31; and an educational seminar, luncheon, and walk-around tasting on Sunday, Feb. 15 presented by the Paso Robles chapter of the Rhone Rangers (RR).

Even though the two events might seem to compete with each other, Jason Haas, general manager of Tablas Creek in Paso Robles and RR president of the board of directors, says they don’t: “Most of the Rhone Rangers participate in HDR each year, and it is one of the best events anywhere in the country. The contributions it makes to spreading the word on Rhone varietals is enormous, and the focus it gives to Paso Robles just by being located here is invaluable.”


The difference between the two events is this: HDR is international, and includes winemakers from South Africa, Australia, France, and anywhere else where they grow and produce Rhone varieties. HDR takes place over three days, which requires higher fares. Of course, I wouldn’t dream of missing it. More than half the attendees work in the wine industry.

RR’s tastings take place several times annually and are very reasonably priced, considering the quality provided if you take in the entire day. The latter’s benefit to the wineries is that it’s a year-round advocacy organization that’s limited to American wineries. RR’s largest tastings take place three times a year among the Seattle, San Francisco, and Los Angeles areas.

“Rhone Rangers does what it can to promote American Rhones through multiple tastings, outreach to the press, partnership with other charities, and events as opportunity to spread the word,” Haas noted. “Plus, the organization is trying to support the next generation of Rhone winemakers, giving tens of thousands of dollars over the last five years to students at universities focusing on research on Rhone varietals.”

The participating local wineries share Haas’ enthusiasm for RR. At L’Aventure, General Manager Michael Young explained: “HDR is really the crème de la crème Rhone event, given its international content and limited participation. The presence of top wineries from France, Spain, etcetera, really creates an aura of discovery for attendees. Stephan [Asseo, winemaker and owner,] says he loves showing his wines at HDR in the company of some of the best Rhone wines in the world.” But they also appreciate the value of RR for its trade and consumer tastings, which Young says provide producers with access to good consumer and trade contacts.

“In the 1970s I sent my Syrah to three major competitions: London, Los Angeles, and Orange County, and won gold medals at all three, but nobody cared,” he recalled, admitting the certificates hang in his wine cellar. “It took such winemakers as Randall Grahm (Bonny Doon) and Bob Lindquist (Qupé) to make Syrah popular among Americans.”

But Eberle believed Rhone varieties planted in Paso Robles would create “spectacular wines,” and he was proven correct. Yet after four generations of wine production there, making wine there, “I still contend that the best Paso Robles wine is Cabernet Sauvignon,” he stated. No Rhone zealot I know would agree.

According to Haas, the RR Experience will be similar to the 2008 event: “We did this last year and it was a great success. Both the seminar/lunch and walk-around events sold out and we got great feedback from the attendees,” Haas recalled. “So we tried not to mess with a formula that was working, although we added the silent auction at the walk-around tasting to raise money for the RR scholarship fund.”

If you want to keep this romantic weekend going, take your sweetheart to this outstanding Rhone wine celebration. ∆