Calm in the face of fame: David Vienna lands a book deal after telling parents to take it easy 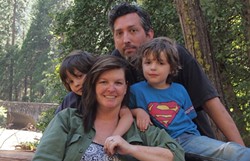 I’m not at all jealous of David Vienna. I mean, I was. But I’m not now. When I first heard that the man who essentially took me under his wing when I was first an intern at the Sun—New Times’ sister paper in Santa Maria—and trained me up in the ways of journalism, essentially grooming me to take over for him as arts editor when he left to handle the same position at our paper in San Luis Obispo, when I first heard he’d landed a book deal, I thought, “What does this guy have that I don’t? Why does he get all the breaks?”

Vienna—who worked at the Sun from 2000 to 2001, and then New Times from 2001 to 2002—launched The Daddy Complex four years ago, writing personal entries, posting links, aggregating parenting stories, discussing dad- (and mom-) related news and issues, and uploading videos and other assorted Internet goodness.

About three or four months ago, he presented a new technique of his own design “that will guarantee your child grows up to be an exemplary student and citizen”: CTFD. That stands for (readers, cover your children’s eyes) “Calm The Fuck Down,” and it’s directed at parents, not kids. The idea is simple, in that if you’re freaking out as a mother or father of a kid who’s not learning the ABC’s fast enough or is being embarrassing in public, you just need to CTFD.

“Yes, using the CTFD method, you’ll find the pressure lifted and realize your child loves you no matter what, even if they’ve yet to master the alphabet,” he wrote.

And people loved it. Journalists and bloggers and writers of all stripes began touting the method in their own publications, therapy clinics began citing it, the women over at The View talked about it. Vienna appeared on the Today show as a parenting “expert” to discuss whether parents should fight in front of their kids. (“Don’t say anything that you wouldn’t put on Facebook,” he told Al Roker.)

Then he got that deal I mentioned earlier. Knock Knock—a group that puts out “design-driven gift products and books”—decided to breathe even more life into the CTFD Method by asking Vienna to take his post and run with it in print. After he announced the good news, I requested an interview, to which he agreed.

And then I waited a while to get back to him again, because I’m pretty busy … with all my … own, uh … . Anyway, here’s the interview:

MILLER As you can see, I'm moving at the speed of light, if light were having joint pain. … So I see you've got a book deal for 2015? This is for an idea that went viral, and most viruses (except for some pesky STDs) come and go. Will people still remember CTFD as fresh more than a year and a half from now?

VIENNA Internet success, if that's what my experience amounts to, is as predictable as a hug from Robin Thicke—you never know what'll happen, he may pat your back or he may grab your ass. So, I don't know if people will consider CTFD fresh a year from now or not. But, I do know people are still finding it and applying it to other aspects beyond parenting. People use it for writing, wedding planning, there's even a clinic in Michigan that offers classes in how to use it for its intended purpose: parenting. Book publishers no longer just hand out deals for viral achievements. They've been burned too many times. ($#*! My Dad Says, anyone?) Now, they want that viral Twitter feed or meme to have some substance to it. While my book deal was certainly prompted by my post going viral, the content of the post seems to have touched a lot of people, and that's what'll appear in the book. Well, that and pictures.

MILLER Pictures, you say? Will these be photos or illustrations of people C'ing TFD?

VIENNA I'm not sure. I've got to write the book first.

MILLER Fair point. So how are you going to go about that? Do you, like Maria, think the beginning is a very good place to start? Or are you going to start with the core of your idea and build out from that, like rings growing on a tree? Now that I’ve written that second one, it seems like a really bad way to write a book. I don't know how that would work.

VIENNA Well, to be honest, I'm writing the book now, like as we speak … uh, I mean, e-mail. And I'm able to do that because, when I created the proposal, it included a thorough outline of the entire project, so that work's done. I'd rather not give it all away right now, but I'll tell you what the book is not: a “how to” book; a self-help book; a memoir. I'll tell you what it is: something I'm writing between fielding your e-mails.

MILLER Now I feel guilty. Not too guilty, but a little. Because I know I'm not your only distraction while trying to write. I'm guessing you also have to eat and go to the bathroom, right?

VIENNA Don't feel guilty. One of the keys to my success is ignoring e-mails when I have to get something done. That's why it took my five hours to reply to your last one. Also, I have an empty milk jug sitting next to me in which I pee.

MILLER I walked into that one, but still: Ew. So you've been a popular online presence for some time now, regularly putting up blog posts, videos of puppet comedy, and other funny and thoughtful stuff about parenting and life. I'd think you'd have a pretty good sense of what people will respond to by now. Were your Spidey senses tingling as you penned the CTFD stuff?

VIENNA Actually, I don't really consider what people will respond to when I write for the site. I did the puppet show thinking it would blow up and, though the episodes have built up a nice number of views over time, it didn't go crazy like I expect (I thought, "Puppets, potty humor. This thing is gold, I tell you! GOLD!"). I learned if I only write or post stuff I think people will love, my posts wouldn't be very true to who I am, which is more important for what I'm doing. So, my Spidey sense wasn't tingling as I wrote CTFD, but I liked it because it honestly represented how I felt: fed up.

MILLER And obviously other people feel the same way. You seem to have tapped into a collective belief that in this society, in this time, we all need to CTFD. You mentioned a clinic in Michigan using the method for parenting, but other applications, too. Was there a particular trigger that pushed you from being annoyed with overreacting parents to being fed up? With two boys of your own (feel free to mention at any time how awesome they are), you have to see a lot of crazy coming off of other parents, right?

[At this point, days went by with no response, because Vienna was “working.”]

VIENNA There was a story a few months before I wrote CTFD about "minimalist parenting," which basically means you don't pack your kid's schedule full of activities, but rather let them have free time to play. It struck me as ridiculous that it had a name and someone was shilling it as a parenting method. I had the idea to make up my own equally ridiculous parenting method, but I sat on it until I had time to do it right. As for my personal experience, we've been fortunate to meet a good group of like-minded parents. I think we're all kinda doing the best we can and not comparing us or our kids to anyone. (Our champagne playdates help keep us level-headed; the champagne's for the adults, not the kids.) That said, my boys are super-awesome. So, y'know, there's that.

MILLER Since you mentioned your kids, I have to ask: Do you see any parallel between your children and your writing? Both get sent out into the world with the best of intentions, encountering love, hate, encouragement, danger ... .

VIENNA Meh ... I don't really subscribe to the “writing = child” metaphor. I don't take it badly if someone hates my writing. And while it's cool if someone loves what I write, I'm not craving that praise either. Also, much of the writing I do passes through many hands, some of whom I don't know. And I sure as hell don't want a stranger touching my kids. So, I don't look at my writing as my children. It's more like something I built, a structure for which I may need to hire an electrician and maybe work out the parking situation with the city. And then other people may move in, maybe using it as a work/live thing, perhaps enjoying the moonrise over the urban skyline from the picture windows in their living room ... I've taken this metaphor too far.

MILLER And I don't want you wasting all that imagery on me. You should save some for your book. So I'll wrap up with this: What am I forgetting to ask you? What are you eager to say despite the fact that I haven't yet given you the right prompt?

Executive Editor Ryan Miller is starting a fourth blog and a seventh novel. Contact him at rmiller@newtimesslo.com.