Everything all at Once, by Cambria resident Ivy Cayden, is available through Amazon and Barnes and Noble online. Or you can support the local economy through buying a copy of Ivy Cayden's debut novel at STASH Local Goods 815 Main St., suite A, Cambria, and at Smoobage, 591 Embarcadero, Morro Bay.

It's no secret that teenagers love music, and author Ivy Cayden has cleverly capitalized on that love by incorporating a Spotify playlist into her debut novel Everything All at Once, part of her planned Chorduroys And Too Many Boys young adult book series.

"Since publishing my novel, I've learned of other authors referencing songs at the beginning of their chapters, but I have yet to see another author actually stitch the songs right into the story and utilize a playlist in the way I have," she explained in an email interview. "In my particular case, the idea for the playlist existed before I had written any of the story. My characters are just as music-obsessed as I am, and I wanted the series to mirror that."

In addition to her new book, Cayden also writes a music blog, My Multi-Track Mind, that searches out music from up-and-coming artists and interviews them. Some tracks on the 67-song Spotify playlist were discovered through her blog.

"Launching My Multi-Track Mind almost five years ago fulfilled a childhood dream of mine," Cayden continued. "I consider it an absolute honor to share the artists' stories and celebrate their music. I am always on the hunt for the best, lesser-known indie artists—and my inbox is perpetually flooded with new submissions for interview requests and playlist placement. To me, it's like mining for gold!" 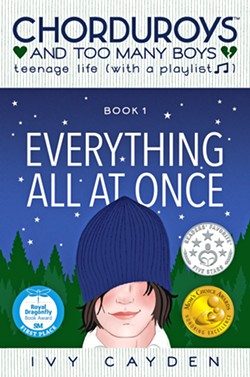 Her goal is to both introduce new music to her readers as well as point them to other older artists they may have missed, which is why tracks like The Cranberries' 1992 song "Dreams" and Journey's 1977 song "Wheel in the Sky" are included.

"I wanted the book's playlist to mimic the intense, kaleidoscopic emotional range of teenagers, and that required not limiting the music by genre or decade," she explained. "I think the vast variety of sound makes the story feel more real. Music can serve as a great connector; and, since all of my characters have their own listening preferences, the songs they choose to listen to at specific points in the story help readers become more intimately acquainted with each of them."

"The music served as a gateway from my world into the story's world—and I wanted readers to have access to that entrance, too," Cayden added. "Although it seemed arduous, I somehow knew if I could anchor songs in the story in a precise and purposeful manner, it would result in an incredibly immersive experience for the reader."

It works! Even though you don't have to play the song list as you read—the story can be enjoyed on its own—the songs bring an added layer of meaning to the characters and what they experience.

Essentially, Everything All at Once is a story of a group of close friends, their various shifting love interests, the secrets they keep from one and other, and the general travails of navigating adolescence. Expect unrequited love, deep social insecurities, a longing for belonging, and the fear of the future. It all feels authentic, and for older readers, it sparks high school memories.

"I believe the key was sprinkling in the really raw, fluctuating inner dialogue of the main characters," Cayden said of her story's realism. "What are these individuals thinking despite what they are saying or how they are behaving? That became a delicate balance—how much inner emotion to reveal versus conceal. And when to grant readers a deeper glimpse inside certain characters. I continually challenged myself to plunge beneath the surface of their insecurities, conflicts, hopes, and dreams to produce a more authentic story.

"While there's currently nothing autobiographical in the series, putting myself in the proper mindset to chronicle the lives of these teens does at times involve me revisiting choice moments from my past—from the cringe-worthy and crestfallen to the promising and euphoric."

The story is also something of a mystery because the various characters harbor secrets, some as simple as who they're crushing on.

"I do strive to keep my readers guessing. In Everything All At Once, each character holds a distinct slice of the truth, but none of them have the whole pie. It's much like it is in real life, with lingering uncertainties and masked emotions causing us to call into question others' true feelings and actual motives," she said. "How differently would we behave if we somehow knew every secret previously kept safe in our inner circles?" 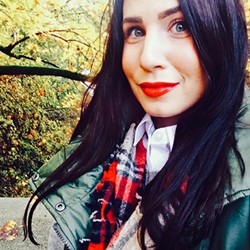 "When I found out I was pregnant, one of my first thoughts was, 'I wonder which will release first: the second book or the baby?' While the second book is already well underway, I have taken a short hiatus from the series and My Multi-Track Mind to prepare for motherhood. As soon as our little bundle makes her grand entrance and I've acclimated to life as a new mama, I'll be diving right back into the writing. I can't wait to share what I've been working on!"

Everything All at Once is a cliffhanger, and the next one picks up right where this one left off—a teenage party that ended in a lot of hurt feelings.

"I've envisioned the whole story as a vibrant saga that follows the tight-knit group of teens into adulthood. Regardless of the total number of books, the Chorduroys And Too Many Boys series will continue to feature Kila Lorens, her older brother, Ethan, and all of their friends. And each book will always have its own intricate and immersive playlist."

Cayden's music tastes are eclectic and terrific. Anyone can listen to the book's Spotify playlist. Just Google it. Listen, and it may make you want to read this book.

"Music is transporting," Cayden explained. "When the characters listen to music in their homes, in their cars, or at a café, and you—as the reader—are also listening to those same songs at those same moments, the characters seem to breathe and the story feels more real." Δ