Steve Kellogg: A Retrospective, an exhibit featuring the works of the late Cambrian artist, runs until Oct. 27 at the Cambria Center for the Arts. For more information, visit cambriacenterforthearts.org.

When Cambrian artist Steve Kellogg passed away earlier this year, the tight knit Cambria arts community quickly found a way to honor him.

"It was total kismet actually because an artist that we had in the schedule was unable to be our featured artist, so we had an opening," Cambria Center for the Arts (CCA) Gallery Director Janet Rooney said regarding the retrospective exhibit of Kellogg's life's work. "When Steve passed we thought, what a wonderful way to pay tribute to him." 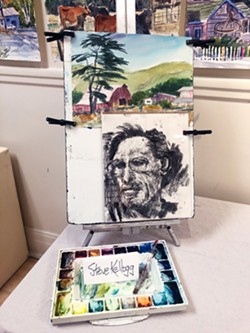 Steve Kellogg: A Retrospective will show at the CCA until October 27. The exhibition features both paintings and ceramic pieces that Kellogg created over his lifetime.

While Kellogg had painted hundreds of works by the time of his death, his lifelong career was in a less artistically expressive discipline—he was a biology teacher at Chaffey Community College in Rancho Cucamonga.

"He was more involved in ceramic arts prior to retirement, and then once he retired, he really dove into painting, continuing his ceramics as well," Rooney said.

A fine artist herself, Rooney said that looking at the evolution of Kellogg's work over his life is telling of his background in the sciences.

"The neat thing is seeing the progression of how he started out and where he got to in his technique," she said. "[He went] from being a little bit too fussy and technical in the beginning, which makes sense being a biology teacher, to something more loose and easygoing with more vibrant color and just a nice consistency and feel across the whole last five years."

Kellogg's vibrant paintings line the walls at the CCA gallery, and his distinct style is easy to spot. One piece showcases the branch of a fruit tree, with bright oranges and reds contrasting the tree's verdant leaves. Another depicts a cheery storefront with a picket fence of rainbow pastels. Unafraid of contrasting color palettes, Kellogg's works feel at once impressionistic and abstract.

"The thing that I get drawn into with his work has to do with the color and the feeling of the brush, just the fluidity of movement," Rooney said. "Even though it's watercolor painting, which isn't always like that, there's a rhythm to it."

As Rooney prepared for the opening of the retrospective exhibit, she found herself with far more paintings and ceramic pieces than she could showcase. She said she had gone through 400 paintings leading up to the Oct. 3 opening, only to find more when she went to Kellogg's house.

"He has shown extensively around the Central Coast [and] always shown at least one piece at each of our shows at CCA," Rooney said. "He was a prolific painter and ceramic artist. He always had something to contribute every time we had a new show going on." 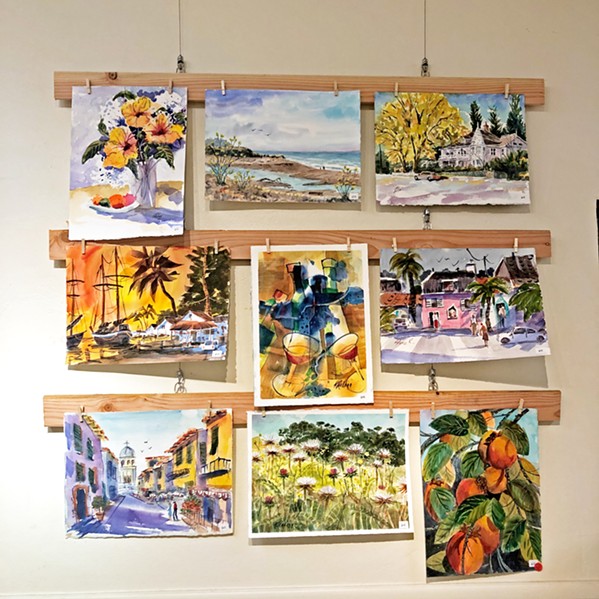 In addition to Kellogg's paintings displayed on the walls, hundreds more are stacked in folding print racks throughout the collection. Some of those pieces are painted on both sides of the page, each with two completely different scenes, a testament to the artist's never fleeting passion.

Kellogg was an active member of the Wednesday Irregulars, an artists' group that meets weekly to paint and critique one another's work. The group always paints en plein air, the practice of painting outdoors rather than in a studio.

Having painted with the group herself, Rooney was able to become intimately familiar with Kellogg's approach to both painting and life.

"He was there every time I was there, unless he was traveling," Rooney said. "He just loved to be outdoors, loved painting, and loved to be with the group."

"I would often position myself close to him when we were en plein air so I could watch and learn," Rooney said. "He could paint two or three paintings in one session, whereas I would do half a painting, maybe. He just had a very easy style, and I think that was sort of indicative of his personality."

"Usually when he spoke up, people listened—that type of person," Rooney said. "Steve was always the one who was sort of the teacher of the group. He was the one who had the most constructive feedback for everybody. Now it's greatly missed."

Simultaneously, Kellogg always strove to improve his own technique, too.

"He was a voracious learner throughout his life. He was starting to do more traveling to take classes so that he could improve his painting," Rooney remembered. "He just wanted to be the best artist he could be." Δ