Neil Simon's The Sunshine Boys shows through April 7 at the Cambria Center for the Arts. Tickets range from $10 to $20. Visit cambriacenterforthearts.org for more information.

Does having the last laugh feel satisfying if no one's there to hear it? Probably not in a ha-ha-ha, laughing out loud kind of way, at least. Comedy isn't all rainbows, and this is well shown in the Cambria Center for the Arts' (CCAT) staging of Neil Simon's (Lost in Yonkers, The Odd Couple) 1972 Broadway hit, The Sunshine Boys, which gives audiences a glimpse into the not-so-happy side of making jokes for a living. It's been a decade since actor Willie Clark's (Jonathan Shadrach, CCAT's Rip Cord) comedy partner, Al Lewis (Hank Wethington, CCAT alumnus), left him and show business behind. Since then, Willie has tried fruitlessly to forge his own solo career while also struggling with aging out of the industry. After more than a decade of refusing to speak to Al, Willie's nephew and agent, Ben (Ryan Treller, seen at the Long Beach Shakespeare Company) comes to him with an offer from CBS: reunite with Lewis for one night and earn $5,000 (and this is five grand in 1970s money, baby) for a special on the history of comedy. After much hemming and hawing, Willie accepts, and the stage is set for a reunion that will bring up old wounds and abandoned dreams.

The show takes place predominantly at Willie's rundown New York City apartment, complete with a cheap TV and sad makeshift table, and the studio at CBS. The show's director, Bryce Prunty (a Pacific Conservatory Theatre grad), describes the show as "a play about reconciliation and forgiveness, even if it does not happen until the end time on this planet."

While there are laughs along the way, The Sunshine Boys makes audiences work and wait for some sense of closure. 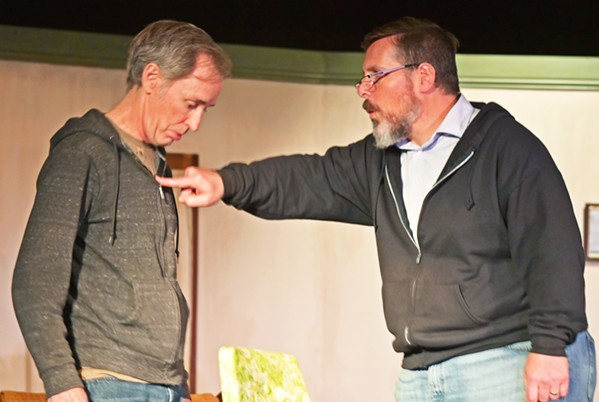 Shadrach, the leading man, plays Willie as a bitter curmudgeon of an old man, slowly losing his memory, with no one left in the world but his nephew. Still, even at his most ornery, Shadrach manages to convey a sweet vulnerability that leaves you still rooting for Willie, as awful as he is to almost everyone. And Wethington as Al is just waiting for a sign, any sign, from Willie to serve as a connection back to a relationship that they lost so long ago, without being willing to take that first step or apologize.

Through dark comedy, Simon's The Sunshine Boys reminds us that life is short, and we're only as good—or terrible—as those closest to us. Δ

Arts Writer Ryah Cooley is laugh-crying. Contact her at rcooley@newtimesslo.com.