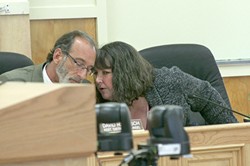 A series of controversial firings, an alleged trend of poor community relations, and the highest compensation package of any community services manager in San Luis Obispo County proved to be a losing combination for Cambria Community Services District General Manager Tammy Rudock, who was terminated on April 29.

Rudock served as the district’s general manager since 2004 and pulled in a salary of $166,538. She was given the pink slip by the Board of Directors after a special closed-session meeting.

Rudock had become the target of criticism from some very vocal residents after she terminated popular Fire Chief Mark Miller. To date, Rudock and the district haven’t released the reasons behind Miller’s firing.

The April 28 board meeting drew more than 300 residents—young, old, people in wheelchairs—calling not only for the reinstatement of Miller,
but also Rudock’s ouster. Rudock didn’t respond to the criticism.

Cambria resident Richard Stacy told the directors there had been a “long-simmering discontent” with the general manager, to the point where it “is no longer advisable to let her contract expire.”

Miller is appealing his termination; the district has contracted with CalFire to take over while board members hold discussions on Miller’s future.

Miller told New Times he wasn’t sure how the appeal would turn out, but he was “overwhelmed” by the strong show of support from the community after a relatively short tenure.

“Win or lose—however this turns out—I’ve already won,” he said.

Board members voted unanimously to terminate Rudock. She had been with the district since 2002, when she was hired on as assistant general manager, and was promoted after then-manager Vern Hamilton retired in 2004.

Current Utility Manager Jerry Gruber has been tapped to step in as general manager. Gruber started with the district in late 2010. He previously served as city manager for Atherton from January 2008 to October 2010. ∆