How many female directors can you name off the top of your head? Maybe Kathryn Bigelow (The Hurt Locker), or Sofia Coppola (Lost in Translation), or Jane Campion (The Piano), or Greta Gerwig (Lady Bird). Or maybe you couldn’t think of a single one.

As of 2018, only 28 percent of Academy of Motion Pictures Arts and Sciences members were female, and 13 percent were people of color. Filmmaking is often a white man’s world, but that hasn’t stopped Cambria native S.J. Main-Muñoz, 41, from pursuing her lifelong dream of becoming a director, a dream that’s finally coming true. 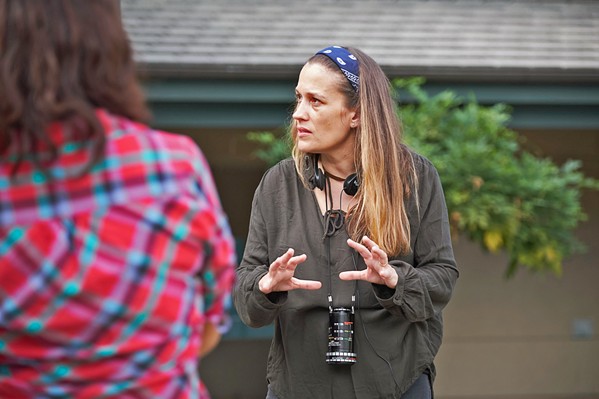 On Jan. 23, she travels to Chicago to begin directing an episode of Chicago Med, which will then be broadcast on NBC on Wednesday, March 25. How she went from a Cambria theater and dance kid to one of five women chosen to participate in NBC’s Female Forward directors’ program—chosen from 500 applicants!—is a story of perseverance, tenacity, and talent.

Main-Muñoz attended Cambria Grammar, Santa Lucia Middle School, and Coast Union High School, where she graduated in 1996. She also had to attend Cuesta College her senior year to acquire enough credits to be accepted into UCLA’s theater program, which she finished in just three years.

“I acted at the Pewter Plough Playhouse, was a very involved dancer with American Dance, and also took classes regularly at the SLO Repertory Theatre. I also acted in the high school drama club,” Main-Muñoz recalled, and as a high school student, she also wrote Steven Spielberg a letter.

“I was obsessed with his films and said should he ever open the studio and have spots for learning under him, I'd love to work for him,” she explained.

As a freshman at UCLA, Spielberg’s DreamWorks SKG reached out and invited her to a new internship program.

“I was one of very few females and the only one not in the USC Peter Stark producing program at that time,” she said. “I started in Casting and then moved over to Feature Development. It changed my life because I saw a high-functioning production company where individuals were urged to be creative and happy every day. It sounds natural, but it's quite groundbreaking.”

“I stayed in NYC until 2005,” she said. “I was working full-time at Merchant Ivory as a script reader, hustling to get my thesis film, La Cerca, done.”

She returned to California in 2005 and found she “couldn't figure out how to actually get paid to direct. I found it much easier to work as a producer, so that's what I did for over ten years in various capacities in film and commercials.”

Then three years ago, Main-Muñoz realized she’d never be fulfilled creatively and professionally until she was directing, but the struggle to break into the business has been unending.

“Oh my God, it’s been a big hustle,” she admitted. “I try to be positive and go, ‘I must be doing something wrong.’ Over the last 15- to 20-years, I’d go, ‘OK, let’s try a different way.’ Even after going to UCLA and Columbia, still nobody can tell you how to get a job. There’s no rule book, no set way to be successful as a director. At first, everyone said, ‘Oh, make short films,’ so I made a ton of short films, which won a ton of awards, but if you’re not that ‘one film’ that wins Canne or Sundance, that’s not going to just get you an ‘in.’ It’s just crazy that it took this long. Is it because I’m a woman? It’s hard to think that doesn’t have something to do with it because a lot of my male colleagues from Columbia were directing almost immediately after graduating.”

Finally, thanks to the Female Forward program, NBC is taking a chance on her.

“You do several interviews over and over—I did this all last year. I interviewed for five shows and got selected for Chicago Med,” she said.

Then she spent time “shadowing” directors on the show for a couple episodes last summer.

“It’s almost like jumping into a machine that’s already moving,” she explained. “There’s a producer on the show, and a producing director who will give you feedback in terms of your role, but you’re a guest director. You go to the show and you have seven days of prep and then eight days to shoot.”

If Main-Muñoz’s time in the director’s chair is successful, she can expect to see more professional work.

“The program gives you the first episode, and for someone not in the industry, it sounds like, ‘Oh, you just get one episode?’ But to get an episode is huge! You have someone take a chance on you, to be hired as a professional director is crazy. It’s a super challenge. Male or female, whoever you are and whatever age, it’s a huge accomplishment because once you get that episode, assuming you do it well, you get hired again and again. I’ll be a member of the Directors Guild of America.”

It’s been a long road to get her break, and she notes that “it’s just crazy to get my first opportunity at 41,” but she credits growing up in Cambria for her determination.

“I feel this huge loyalty the area. It’s so isolated and it makes you work so hard, and I’m honestly so thankful of the Central Coast because I think the effort it required of me growing up to succeed is what gave me the ability to never give up on this dream.”

She’s also thrilled to be a role model—a woman of color who’s finally made it in a male-dominated industry.

“Until I was given this opportunity, I spent each day with a to-do list, a goal-set, and I’ve done this for years,” Main-Muñoz said. “Because I have a daughter, I had this horrible feeling that I was never going to be able to teach her that she can accomplish her dreams. My mom and dad were always telling me, ‘You can do anything you want, any career you want, just put your mind to it.’ They always told me that, and it scared me because up until just six months ago, I was thinking, ‘It’s not working. What am I doing wrong?’ When I finally got this, I broke down crying. What touches me most about this opportunity is I can finally tell my daughter—and believe it—that she can do anything she wants to do. That’s what’s been most groundbreaking for me.” ∆

Editor's note: This article was edited to correct a spelling error and a misstatement about Main-Muñoz's college major.