The Cambria Community Services District unanimously voted on July 18 to spend nearly $50,000 on a backup generator for its water distribution system. It will serve as a power source if the district's electricity is shut off as part of PG&E's Public Safety Power Shutoff program.

District staff evaluated its backup power supply and found that the administration office, the fire department, its emergency operations center, and the wastewater treatment plant would be secure—each has its own backup generator. But the district's water distribution system has a generator from 1970 that failed to achieve the required power output. 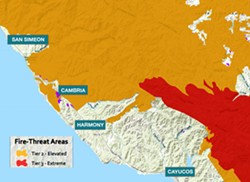 While awaiting installation of the permanent replacement, staff received quotes for a rental generator to provide the necessary backup power supply. The rental will cost the district almost $2,000 per month.

The evaluation came about as PG&E announced plans to temporarily shut off power in areas where electrical and transmission lines pass through high fire-threat areas. The California Public Utilities Commission has two categories of high fire-threat areas: Tier 2 (elevated risk) and Tier 3 (extreme risk). Cambria is a Tier 2.

Steve Crawford spoke on behalf of PG&E at Cambria's Wildfire Preparedness Day on June 29. He said that the company would only proactively turn off lines to help reduce the likelihood of an ignition when extreme fire danger conditions are forecast.

According to PG&E, in order for it to consider flipping the switch, there would have to be a red flag warning declared by the National Weather Service, 20 percent lower humidity levels, winds forecast above 25 miles per hour and wind gusts in excess of 45 miles per hour, dry fuel on the ground, and real-time observations from PG&E personnel.

Crawford said PG&E plans to alert the community a day ahead of any anticipated emergency.

Cambria Community Services District Board President David Pierson said there are two transition lines that run through the community.

"If there is a red flag event, [the transition lines] are in the red zone so they might have to turn one or both of them off," Pierson said.

Loss of power could affect Cambria residents for three to five days—or longer, according to John Weigold, the district's new general manager.

"My gut tells me there's a good potential for that to be extended even longer, because before they restore power, they have to visually inspect every single line—the entire length of whatever they turned off," Weigold said. Δ