Ringleaders of Redemption: How Medieval Dance Became Sacred by Cambria resident and scholar Kathryn Dickason is available through Amazon and Walmart online.

In the 1984 Kevin Bacon film, Footloose, Rev. Shaw Moore (John Lithgow) explains to Bacon's character, Ren, why dancing is forbidden: "Even if this was not a law, which it is, I'm afraid I would have a lot of difficulty endorsing an enterprise which is as fraught with genuine peril as I believe this one to be. Besides the liquor and the drugs which always seem to accompany such an event, the thing that distresses me even more, Ren, is the spiritual corruption that can be involved. These dances and this kind of music can be destructive."

Now flash back a thousand years or so to the medieval period and the Latin church, which also denounced and prohibited dancing, labeling it demonic, lustful, prideful, and sacrilegious. Now forget what you think you know, because Cambria resident and scholar Kathryn Dickason recently proved that idea incomplete at best.

Her new book, Ringleaders of Redemption: How Medieval Dance Became Sacred, unearthed copious historical sources that demonstrate during the High and Late Middle Ages, dance was not only tolerated but transformed it into a dynamic part of religious worship. 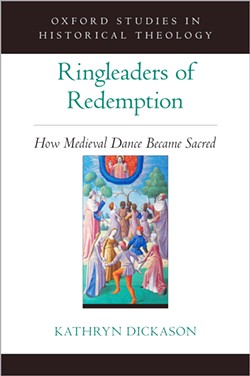 How did this USC postdoc scholar end up in Cambria?

"I decided to move from Los Angeles to Cambria for several reasons," Dickason said in a recent email interview. "My USC teaching duties ended in May 2020, and by that point pretty much everything that I did that was work-related was online anyways, so I thought it would be a good time to move in with my parents in Cambria temporarily while COVID cases in LA reached a dangerous high. My position at USC this academic year is remote with no teaching duties, so I have just been writing my second book in close proximity to the ocean. It's been really nice."

What is a postdoctoral fellow in the Society of Fellows in the Humanities? What do you do?

"A postdoctoral fellow is usually a position you have shortly after you've received your doctorate. In my case, I received my Ph.D. at Stanford University in 2016, lectured for a few years in the Silicon Valley, and then was at postdoc at the University of Southern California from 2018-2020. I'm currently a visiting scholar in the School of Religion at USC. Being a postdoc was kind of a sweet spot because our teaching and administrative duties were very light, so we could dedicate most of our time to our research. I edited and published my first book during that time.

"The Society of Fellows refers to the interdisciplinary group of faculty members and postdocs in our USC community," she continued. "We basically met up a few times a month to share research and socialize. It was a very supportive community, and my cohort included people from a wide variety of fields, including history, art history, anthropology, literature, and religious studies. In September, I'll begin a new research position at the Center for Ballet and the Arts at New York University."

Dickason's book quotes Augustine's book, The City of God, as an example of the church's early hostility toward dance: "The worshippers and admirers of these (pagan) gods delight in imitating their scandalous iniquities. Let there be heard everywhere the rustling of dancers, the loud, immodest laughter of the theater; let a succession of the most cruel and the most voluptuous pleasures maintain a perpetual excitement."

He really made dance sound fun, didn't he?

"Yes, Augustine was well aware of the pleasures of spectacle," Dickason noted. "In fact, in another one of his books, The Confessions, he speaks openly about being a former lover of the theater. Augustine became very conflicted when he converted to Christianity. He seemed to have thought that he would have to abandon earthly delights to be a good Christian, and for centuries his position was very influential for the church."

Ringleaders of Redemption obviously took an enormous amount of research. Tell us a bit about the process.

"I started the research back in 2013 and lived in Paris for almost a year to do so. At French libraries and research institutions, I was able to access and consult medieval manuscripts, some of which were over 700 years old. In one case, I got to work in a French castle, which was pretty cool. 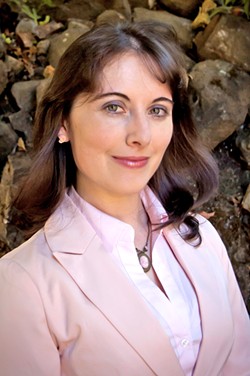 "Archival research requires a lot of patience because you don't always find what you want," she continued. "But when you do come across vital source material, it's a transformative experience. I also did research for the first book in London, Oxford, Italy, as well as some American museums and research centers."

As she discovered that the church in fact began to turn dance to the service of Christendom, was this a surprise to her? Did it go against orthodoxy or previous research?

"Yes, it was a surprise. Before I began serious research for the book, I expected to only find negative discourse on dance—that dance was a sinful or demonic activity. I only expected to find positive discourse on dance when it pertained to heavenly dance, in other words beyond the earthly realm. But, I actually uncovered so much evidence that suggested that earthly dance could enact an appropriate form of religious devotion.

"In this way, my book challenges previous research, which portrays medieval dance in a very negative and condemnatory way. I wouldn't say that medieval dance went against orthodoxy because, as I explain in the book, there are examples of sacred dance in the Bible," Dickason said. "But, Christian dance had been suppressed for so many years that it could perhaps appear unorthodox."

In a nutshell, what's Dickason's theory of why Christianity began to accept dance as sacred?

"Because dance is social and communicative, it actually worked quite well to foster conversion, the sacraments, incarnational theology, and so forth. In my chapter on rituals, I show how the authors of medieval ritual handbooks were actually very conscious of Christianizing pagan rites," she said. "For example, one of them discusses the Roman Saturnalia and describes that nowadays Christians dance not to go crazy but to express humility."

Those interested in the history of dance and the Christian church will find this text fascinating, and though it's a work of deep scholarship, Dickason's writing is lively and accessible. The book is also filled with dozens of medieval full-color illustrations.

"I just want to say that it is important to break down the false divide between written and embodied cultures," Dickason continued. "Typically, Judaism, Christianity, and Islam are considered religions of the book, whereas religious cultures of Africa, South Asia, and the Indigenous Americas are considered more of oral, non-literate, embodied. I hope that by showing how dance was an important part of Christianity at one point gives us a more complex view." Δ