You’ll be flooded with emotion watching Tour of Honor, a stirring documentary that chronicles a trip orchestrated by Honor Flight Central Coast California (honorflightccc.org), an organization that flies American war veterans to Washington, D.C., to visit their respective war memorials. 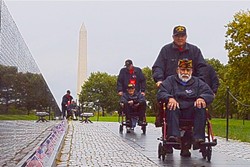 You’ll also be amazed when you discover that the 54-minute documentary—which will screen with two other films at 7:15 p.m. in Mission Cinemas (next to Fremont Theater) at the 2016 San Luis Obispo International Film Festival (SLOIFF)—was created locally by two young brothers: Kyle and Carlos Plummer.

“We were both born and raised here in SLO County and are proud residents of Cambria,” Carlos explained in an email interview. “We started making this film when Kyle was 17 and I was 13. Kyle is now 19 and I’m 14, turning 15 in April. I attend California Virtual Academies, a public charter school, and Kyle is currently attending Dixie State University in St. George, Utah, studying communications with an emphasis in film. We learned filmmaking mostly through experience starting way back in 2007 and ’08 when we made our first short film Indiana Jones and the Crystals of Eternity and our award-winning film The Magic Hat.”

The Plummer brothers attended the very first SLOIFF filmmaking workshop in 2008, and they’ve been honing their skills ever since. Tour of Honor features effective camera work and film editing, and makes excellent use of its soundtrack and score to increase the emotional potency of what is already an emotionally wrought subject. For these American war veterans, recalling their wartime service can be difficult and cathartic. 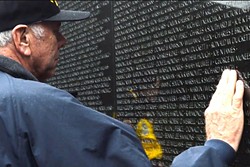 “We learned about Honor Flight through Ron Waltman of the American Legion Post 432 as well as Cheryl and Robert Tolan of Welcome Home Military Heroes, while making a documentary about them,” Carlos said. “We were very intrigued by the subject and learned that we are losing our World War II veterans at an increasing rate. We decided this would be a worthy documentary subject; in doing other short documentaries, we learned the impact these veterans have had on our country and felt that honoring them by telling their amazing stories would be our way of giving back to them. Kyle and our father, Jeff, went on the flight and documented it from start to finish. I edited the film, taking several hours of footage and honing it into the powerful 54-minute film, which will be shown at the festival.”

What did these vets think about two young kids making a film? Did they take the young Plummer brothers seriously? And have the vets seen the film?

“The veterans were very appreciative of what we were doing, sometimes shy but always willing to tell their story,” Carlos explained. “They did take us seriously and knew from the start that we were serious about this project. The veterans who have seen the film have absolutely loved it; some were moved to tears and all were greatly impressed with our work. The film had two sold-out premier showings at the Galaxy Theater in Atascadero on Aug. 2, 2015.”

The Plummers did an amazing job coaxing stories out of these veterans, many of whom hadn’t spoken of the war in years. What did the Plummer brothers learn from the experience? What surprised them most? And finally, what do they plan to do next?

“We learned new things not only about the craft of filmmaking, but also about the amazing stories of the veterans who have served our country,” Carlos revealed. “We were mostly surprised that we had so much material that we could make an hour-long film that told a solid story, which was a big step coming from our usual short films. As for our next project, we have several ideas covering various genres. We’re taking Tour of Honor on a festival run to get as many people as possible to see this timely film about honoring these veterans who fought for our freedom.”

The Plummer brothers’ achievement and the encouragement they received from the SLOIFF is another example of how enriching our local film festival has become. Started in 1993 by local attorney Mary A. Harris to screen classic films, it’s grown into an increasingly important showcase for independent films like Tour of Honor.