It was the summer of '69. William Seavey, today a Cambria resident, had just finished journalism school. He landed a position with Newsweek as a photo intern in New York City, covering what his editors saw fit for his rank.

Meanwhile, the press was stirring about a certain summer music festival looking for a venue. Concert producer Michael Lang was pushing his next vision: the Woodstock Music & Art Fair. After securing a location in Bethel, New York, and some major rock 'n' roll names, tickets began selling fast.

"I heard about the festival, and I decided to go," Seavey told New Times. 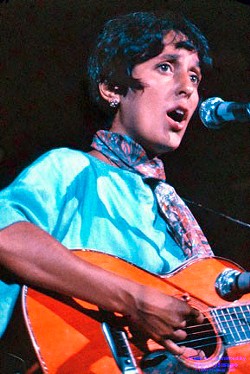 Gripped by his journalistic instincts, he asked Newsweek to send him on official assignment, but they declined his pitch. It wasn't just because he was an intern; the outlet didn't send any staff photographers to the festival, instead opting for photos from an outside agency, Seavey said. To be fair, few expected what would ensue.

But Seavey—with a gut feeling that this was going to be big—did what any spurned intern would do: He went anyway.

"I had my own film, my own camera, and it was on my own time over a weekend," Seavey remembered. "Oh, and did I mention I faked a press pass?"

Despite getting booted out of the press area multiple times due to his forged pass, Seavey managed to capture stunningly focused photographs of the festival's rock stars, including Joan Baez, Arlo Guthrie, John Sebastian, and Richie Havens.

But he also paid close attention to the intensity coming from the audience. Some of his photos show the hordes of bodies, scantily dressed in late '60s festival attire. Another shot features an anonymous man, his eyes transfixed upon the stage, oblivious to the photographer catching his captivation. Another captures shoeless feet, crusted by mud from rain storms that hit during the festival.

"I had a ticket, but I think by the time I got there it was a free concert," Seavey said. "It was impossible to control the numbers."

The festival ultimately attracted more than double the anticipated crowd.

Seavey, now 72, says his memories of Woodstock are mostly kept alive by his own photos or by documentaries like the recently released PBS special, Woodstock: Three Days That Defined a Generation. Though Seavey noted that he was not the youngest of attendees—he was in his early 20s and knew someone who was just 14 at the festival—he expressed concern about Woodstock's ability to persist within collective cultural evocation.

"Woodstock, over time, is going to fade from people's memories," he said.

With this year marking its 50th anniversary, though, attempts to memorialize Woodstock have made a strong resurgence. Many major news sources ran stories in commemoration. Locally, the SLO Symphony put on Woodstock on the West Coast on Aug. 31. The PBS documentary, as Seavey notes, spotlights the peace, love, and utter chaos that carved Woodstock's indelible notch in the timeline of music history.

For the generations that didn't experience the festival, Woodstock connotes peace signs and minimally clothed hippies; for some, it rises to utopia status. Often unknown are the downpours and resulting "muddy mess," as Seavey called it; the acts that performed hours after they were scheduled, some in the early hours of the morning; the exposed wires that, mixed with rain, could have caused mass electrocution; the crowds that went hungry when the festival ran out of food; the two deaths.

"It is idealized," Seavey acknowledged.

But he also emphasized the ways in which festivalgoers walked their "peace 'n' love" talk. In response to the food shortage, Seavey remembers humunitarian efforts to distribute free food.

"Everybody was getting along and cooperating," he said. 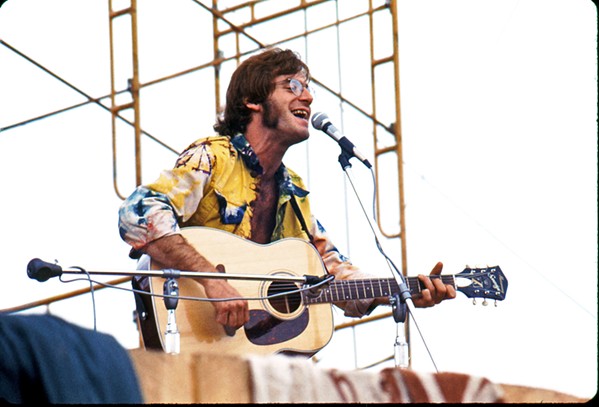 In an ever-divided political landscape, it's that cooperative spirit that baby boomers like Seavey cling to when they remember not just Woodstock, but the era that birthed it. There have been many nostalgia-driven recreation attempts over the years; most recently, Lang himself pushed for Woodstock 50 in an effort to commemorate his famed original. But, as Seavey noted, Lang couldn't quite pull it off logistically.

"It's really almost tragic," Seavey said. "He tried everything. ... There were a lot of people pulling for him, but he had to throw in the towel. There will never be another Woodstock as far as I can see."

Despite the impossibility of re-creating a romanticized past, Seavey's photographs and memorabilia—including an original paper ticket from the festival—can aid in remembrance. As the Bryan Adams tune goes, "I guess nothin' can last forever." Δ