Cambria's fired up over the fired fire chief 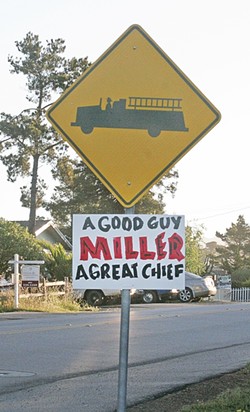 Cambria residents are grabbing their pitchforks and crying for blood after the abrupt firing of a popular fire department chief by an increasingly unpopular Community Services District general manager.

An abundance of makeshift signs reading “Bring back the chief” and “Mark Miller is a good guy” have sprung up around town, setting the tone for a Cambria Community Services District Board of Directors meeting that’s sure to be standing-room only. The meeting was scheduled for April 28.

Miller told New Times he’s hired an attorney and filed an appeal with the board. He said he’s been instructed by his attorney not to speak about his firing, but did say that “it came as a shock,” and that he’s “humbled” by the show of support from Cambria residents. Miller joined the department in July 2005.

His firing is the latest in a sequence of moves by Rudock in trimming staff from the fire department. In February, Rudock fired a district administrative assistant who served as Miller’s assistant. In March, she dismissed two retired firefighters who were volunteering with the department.

In response to the outrage over Miller’s firing, the CSD board is scheduled to hold a special meeting prior to its regular meeting for a “performance evaluation” for Rudock. What that means is unclear, as board Chair Muril Clift couldn’t be reached by press time.