Among the campaign mailers targeting or touting U.S. House of Representatives and Assembly candidates and statewide propositions, Atascadero residents received one calling on voters to not vote for two out of three mayoral candidates.

The black and yellow mailer includes photos of incumbent Heather Moreno and candidate Jerry Tanimoto—the third candidate running for mayor, Josh Donovan, is not on the mailer. 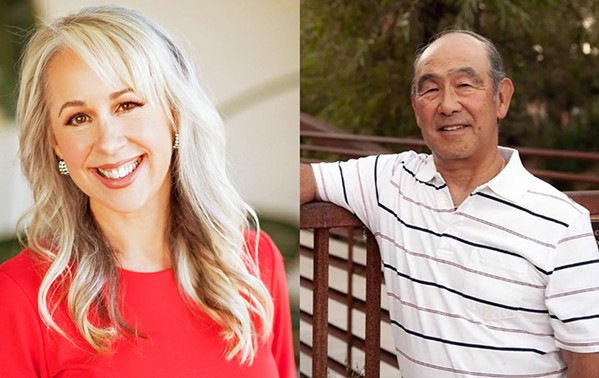 It cites Moreno and Tanimoto as supporting the "2020 sales tax hike, despite the fact it has no citizen oversight of spending."

Tanimoto told New Times in September that he wouldn't take a position on the proposed sales tax because the City Council had already voted to put it on the November ballot, and it's now up to the voters to decide whether to approve it or not.

Should the measure pass, the Atascadero City Council established a two-phased approach to implement public engagement and accountability on spending the funds it would generate.

Phase 1 will expand the city's current public engagement process to include more public outreach and input with an estimated 20 public meetings between January and June 2021. Phase 2 will include an annual report to be reviewed at a joint public meeting of the Finance Committee and Citizens Sales Tax Oversight Committee.

The group's 497 Independent Expenditures Report lists one donor, Brad Goodrow, who's the president of Mid-State Solid Waste and Recycling LLC, that donated $10,000.

Goodrow tried to persuade the city of Atascadero to put their waste collection contract to bid in 2014, when the city was looking into possibly renegotiating its contract with Atascadero Waste Alternatives Inc., owned by Waste Management. The City Council at the time voted to continue the existing contract with Atascadero Waste Alternatives. In 2017, the council revisited the discussion and again continued with its current waste collection agency.

Moreno was a council member during the 2014 and 2017 contract discussions and voted in favor of continuing with Atascadero Waste Alternatives. Δ