A silent group assembled by candlelight outside of Cal Poly's Spanos Theatre on March 5, symbolically clad in white to protest pro-Israel pundit and Middle East scholar Daniel Pipes. Inside, students toting backpacks filed into empty seats next to community members who had long since graduated. Cal Poly professor of religious studies Stephen Lloyd-Moffet, acting as moderator, took the stage to introduce Pipes and explain the university's decision to host the controversial speaker.

"The value and integrity of this university rest on free exchange of ideas," he began, but noted that participants should feel 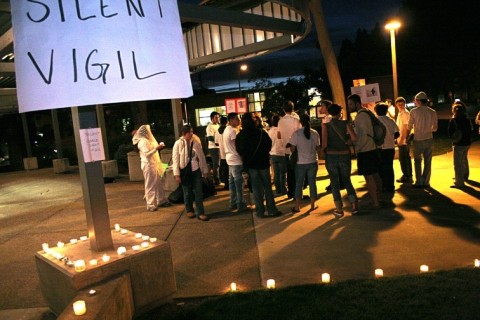 # strongly about what would be said. "Real blood is being shed, real families are being destroyed you should be emotional."

Pipes spoke for about 20 minutes on the subject of "Israel, America, and Middle East Threats" before answering questions posed by Lloyd-Moffett and the audience. He spoke of a growing threat of what he calls radical Islam in Europe, America, and the Arab world over the last 15 years, and repeatedly equated Islamic extremism with fascism and communism in terms of the threat they pose to America and Israel.

Pipes made a distinction between so-called radical and moderate Muslims, but emphasized his belief that Muslim law can't successfully govern a state. During a portion of the speech concerning misconceptions about the Muslim world, he read off an assortment of what he described as common prejudices against Islam, then stressed that he believes radical Islam is the problem.

"Moderate Islam," he said, "is the solution."

Members of the Muslim Student Association, along with two other progressive student groups, organized the candlelight vigil to protest what they called Pipes' "offensive presence" at the university. MSA President Naiyerah Kolkailah was doubtful that a dialogue with Pipes would bring about a better understanding of Middle Eastern politics or promote greater tolerance at the campus level.

"I have lived here my whole life," she said, "and there has never been anyone more racist come to our community. He's sending a message of hate in an effort to create peace and harmony. We think it's offensive."

Pipes studied both history and Middle Eastern studies at Harvard, and received his doctorate in 1978. He voiced alarm about radical Islam years before 9/11, and has since been recognized by many including the Bush Administration as a leading thinker on the subject. Pipes is a regular contributor to the New York Sun, and has appeared with regularity on both Fox News and various CNN programs. In 2002, he started Campus Watch as a project of the Middle East Forum, which monitors Middle East studies at U.S. universities.

In January, a group of approximately 50 Muslim students disrupted Pipes' lecture at UC Irvine on "The Threat to Israel's Existence" when they stood in unison, began chanting, and then exited the auditorium. Pipes responded on his blog, calling them "Goons of Islamic persuasion." Students staged a similar protest two years earlier at the Rochester Institute of technology. Pipes has been quoted as saying provocative statements regarding Muslims, support for racial profiling in the wake of Sept. 11, and America's role in the Middle East.

For his local visit, Pipes was contacted by the Jewish campus-based club, Hillel, among other groups, and his speech was sponsored by the Associated Students, Inc. (ASI), which also recently brought ex-porn star Ron Jeremy to campus for a debate on sexuality. Michael Holan, a Cal Poly student acting as Israel Advocacy Chairman for Hillel, stressed the need for open discussion. Holan said many of the incendiary quotes cited by Pipes' opponents have either been taken out of context or are completely false.

"He's a scholar and an expert in the field," Holan said.

In an interview, Pipes wouldn't speculate on UC Irvine students' reasons for disrupting his speech.

"You'd have to ask them," he said, adding that his point of view, which he says is shared by a majority in the country, is underrepresented on campuses.

Kylie Mendonca can be reached at ohkylieo@yahoo.com.