Can you top this? At the SLO Symphony's season opener, Jim Cushing waxes poetic over violin concertos and Anne Akiko Meyers' dress

Editor’s note: The following is the first of a series of San Luis Obispo Symphony reviews by SLO Poet Laureate James Cushing.

The SLO Symphony began its 2013-2014 season on Saturday night, Oct. 5 with one of those can-you-top-this performances that classical music listeners hope for. 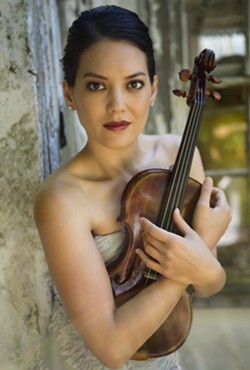 The all-Russian program was the first concert of conductor Michael Nowak’s 30th year with the orchestra, a remarkable anniversary in itself. However, Nowak was privileged to share the evening with two natural stars: guest soloist Anne Akiko Meyers, and the “Ex-Vieuxtemps” Guarneri del Gesu violin she brought with her for the Prokofiev Second Concerto.

You can learn more about this 1692 instrument on Anne Akiko Meyers’ website. Rarer than the more famous Stradavarius, its monetary value is in the millions. Paganini, Kreisler, and Heifitz all played them. Most Guarneri violins are safely locked away in museum vaults, but Meyers’ reputation is such that this instrument is on lifetime loan to her.

I had heard her play it on the website recording, but this was my first time hearing it “live.” The size and presence of the sound coming out of that piece of wood were startling. I have never heard such vivid projection in that hall from one unamplified instrument. Even in Prokofiev’s speediest, most layered sections, each note was clear and distinct, and sound balance with the orchestra was nearly ideal.

The piece itself offers an uneasy, compelling vision of what the world was becoming in 1935. Never as hard a Modernist as Stravinsky, Prokofiev writes in a musical language familiar from Strauss or Tchaikovsky, but the violin part probes into dark, anxious emotional corners. 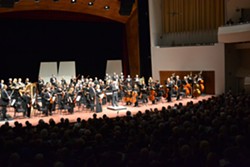 Meyers recorded this concerto for RCA Victor in 1994 and has lived with it almost half her professional life. Her interpretation has all the drama of Isaac Stern’s, and, in time, may gain a similar authority. Her presence on stage was powerful: her creamy face sometimes suggested the adult Judy Garland eyeing the man that got away, and she chose a charcoal gray flowing gown with crimson bows down the back.

The audience would not let her leave after the concerto. She rewarded the third ovation with a solo reading of “Over the Rainbow” that filled the room with the sound of That Violin.

The Tchaikovsky Fifth took up the rest of the program, but the evening had already peaked, and Tchaikovsky’s never been my favorite composer. Yes, his tunes are memorable, but he tends toward repetitiousness in his development of themes, and this symphony left me with too large a dose of melodic pleasantness. (I feel the same way about Paul McCartney’s solo albums.)

That being said, I was struck by how much better the brass and wind sections sounded this evening. Tchaikovsky, always a brilliant orchestral colorist, wrote ballet scores and other narratives for the ears, and Nowak, a film music pro, showed a firm sense of the piece’s drama.