Thanks to the Thanksgiving holiday, it's somewhat quiet out there in live music land. The SLO Brew Rock Event Center is dark this week, and Numbskull and Good Medicine Presents have taken the week off as well, but your friends at The Fremont Theater have you covered with three upcoming shows, starting with the unconventional Canadian bluegrass band The Dead South, which plays the Fremont this Friday, Nov. 29 (doors at 8 p.m.; all ages; $33.17 at Boo Boo's or fremontslo.com).

The band—sometimes joshingly referred to as "Mumford and Sons' evil twins"—stops in as part of its Served Cold tour, so named from a song on its new album, Sugar & Joy, about taking care of each other. The album debuted at No. 1 on Billboard's Bluegrass Chart and No. 40 on Top Album Sales in the USA! The album also climbed to No. 3 on the U.K. Americana Albums Chart. They're also riding high on recently being nominated for International Artist of the Year alongside Mavis Staples and Brandi Carlile, among others, by AmericanaUK.

Sugar & Joy, which was released in October, is the band's third album and by most accounts its best yet. The band gained international attention in 2014 when the video release of its single "In Hell I'll Be In Good Company" was shared on Reddit and went viral, with upwards of 160 million views! With a cello played like a guitar, a banjo, and some great harmony singing, it's no wonder the band so quickly gained traction.

"To the gentlemen of The Dead South, a self-styled 4-piece string band from Regina, Saskatchewan, it's about how, not what, you play," their bio explains. "The Dead South's combination of cello, mandolin, guitar, and banjo has all the hallmarks of a group tuned to bygone times, but with their signature sleight of hand, The Dead South find distinctly ­modern bathos in this old-time rigging."

On the new album, songs like "Diamond Ring" tell the story of "poor William, whoever he is, [who] done got robbed by a would-be groom trying to impress his betrothed. Money doesn't buy love, but it does buy the ring. In The Dead South's world, characters do what they must, even when twisted logic leads them astray. From the opening galloping strum to the lower register cello and deep backing vocals, the song's moody mania captures The Dead South's stock-in-trade, stories of desperation and bad decisions told in fast-paced, brightly laced bursts."

These darkly delicious narrative songs delivered with spartan instrumentation often in minor keys are the sonic equivalent of Michael Lesy's 1973 non-fiction book, Wisconsin Death Trip, which featured 19th century photographs and local crime news reports of the era. It will transport you! 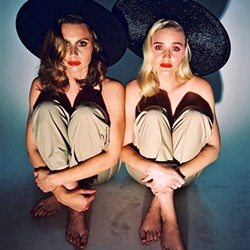 Also at the Fremont, see musical sisters Aly & AJ, who were known briefly as 78violet, as they deliver their indie pop and synth rock on Sunday, Dec. 1, as part of their West Coast Run Sanctuary Tour (doors at 7 p.m.; all ages; $33.17 at Boo Boo's or fremontslo.com), with Armors opening. Featuring Alyson and Amanda Michalka, the duo frequently explores the theme, "time."

"Having achieved success in the entertainment industry as early adolescents, when the duo step back and examine their time and career achievements, they do it differently than most adults," according to press materials. "Their 2018 album Ten Years, which came out after a decade-long hiatus, felt simultaneously like a new beginning and a reintroduction—exploring the reckless fun of their 20s and the relationships of that era with a light and airy synth-pop throwback sound. Now, Aly & AJ return with an evolution of that sound on their new EP Sanctuary, a five-song examination of the soul searching that comes after those feelings writ across the Ten Years EP."

After years of discord over contracts with recording labels, they explain that they lost their passion for music, but "music became our friend again," AJ explained. "Once we were able to take some time and embrace who we were and once we started writing again these last few years, we were able to find the direction we naturally lean."

If you dig '80s synth-pop, you'll dig tracks like "Church," on which they sing: "I do bad things for the sake of good times I don't regret/ Call me what you will, I'm in it for the thrill, I'm just selfish/ I need redemption."

The Fremont also hosts the return of rapper The Grouch on his How The Grouch Stole Christmas Final Tour next Thursday, Dec. 5 (doors at 8 p.m.; all ages; $27.31 at Boo Boo's or fremontslo.com), with Murs opening. 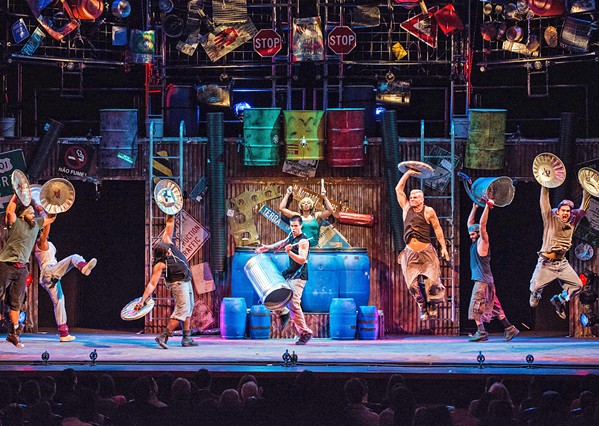 Cal Poly Arts has a couple great shows heading your way this week, both in the Harold Miossi Hall of the Performing Arts Center. For starters, witness the percussive thunder of Stomp, returning to the PAC on Saturday, Nov. 30 (7 p.m.; all ages; $44 to $84 at calpolyarts.org or by calling (805) 756-4849). This award-winning show has been called "explosive, inventive, provocative, witty, and utterly unique." The eight-member troupe "uses everything but conventional percussion instruments—matchboxes, wooden poles, brooms, garbage cans, Zippo lighters, hubcaps—to fill the stage with magnificent rhythms," press materials explain. 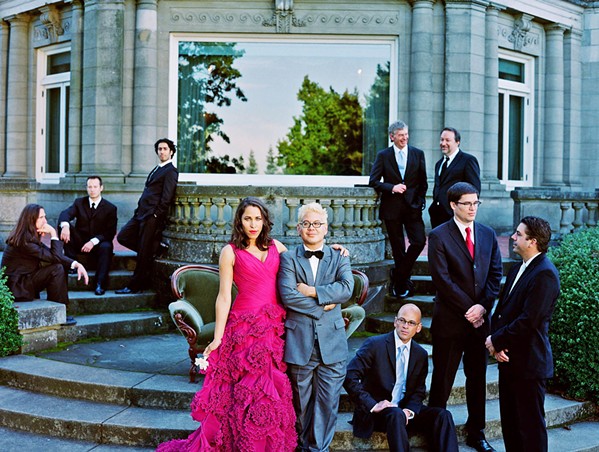 "Pink Martini's 'little orchestra' draws inspiration from the romantic Hollywood musicals of the 1940s and '50s and crosses genres to make an eclectic, modern sound," their bio states. "The group's arrangements of Latin music, jazz, cabaret, and cinema scores come together in a sound that defies categorization."

Morro Bay's only nightclub, The Siren, pretty much has live music every day—check their online schedule—but this week a couple of shows are truly special, starting with some blues by Jeffrey Halford & The Healers with Dallas Hodge of Canned Heat on Friday, Nov. 29 (doors at 7 p.m.; 21-and-older; $12 presale at Boo Boo's, Traffic Records, or eventbrite.com or $15 at the door).

Halford has been delivering his brand of American roots music for 25 years, crisscrossing the U.S. with his band. He lists the likes of Taj Mahal, Los Lobos, George Thorogood, Gregg Allman, Etta James, John Hammond, and Texas greats Augie Meyers, Guy Clark, and Robert Earl Keen as influences. He's currently touring in support of Rainmaker, which is presently at No. 12 on the Euro-Americana Charts and climbing.

Halford and his band will be joined by Detroit native Dallas Hodge, who started playing guitar at 13 and went on to lead several bands over the years and even teamed up with his brother Catfish Hodge in 1970 as the Catfish Hodge Band. In 2000, Hodge was recruited to front the legendary band Canned Heat, which he did for a few years.

Also at The Siren, check out singer and trombone player Aubrey Logan (of Postmodern Jukebox) who will perform her show A Sassy Christmas next Thursday, Dec. 5, in The Siren (doors at 6 p.m.; 21-and-older; $25 presale at eventbrite.com or $30 at the door). Instead of songs about "sugar plum fairies and candy canes" that might "send you into a diabetic coma," Logan will take all those great Christmas songs (plus a couple of originals) and "turn them on their ear," according to press materials. 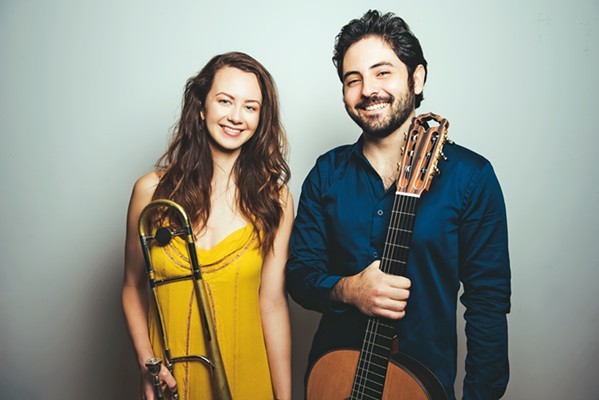 The SLO County Jazz Federation is bringing the Natalie Cressman—Ian Faquini Duo to Unity Concert Hall next Thursday, Dec. 5, for a special concert of straight ahead and Brazilian jazz (7:30 p.m.; all ages; $25 general and $10 for students at my805tix.com or Boo Boo Records). The duo recently received rave reviews at this year's Monterey Jazz Festival before embarking on a European tour. The San Diego Reader said, "Her [Cressman's] trombone is world-class, but her singing voice is another thing entirely, an empathic entity that channels the ages." Brazilian-born guitarist Faquini has performed with jazz luminaries such as Brad Mehldau, Chris Potter, and Lee Konitz.

"From now on, the day after Thanksgiving will be known as Brass Friday," boasted local horn band Brass Mash, which is releasing its video album Hard Brass on Saturday, Nov. 29, at 10 a.m., on YouTube, Facebook, and Instagram TV! 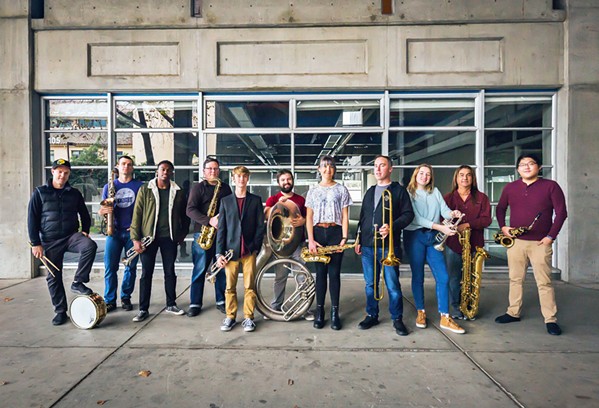 Hard Brass is a collection of live and produced music videos featuring nine original mashups. The collection starts with their 2018 mash-up "Toxic From a Rose" and also includes "California Mind Me Up," which features cameos from familiar faces including Mayor Heidi Harmon, radio personality Suzanne Schonig, and local musician Reese Galido. Also see "I'd Rather Whiskey," which was filmed at Castoro Cellars for the Whale Rock Barn Sessions, as well as "Beat it Still," "Hit My Warpigs," "House of the Radioactive Sun," "While My 25 of 6 to 4 Gently Dreams On," and "Worth 5 on a Preacher." Band nerds rule! Δ