Canadian music legend Bruce Cockburn plays the Fremont on May 8

I didn't "discover" Bruce Cockburn until 1991 and his 16th album, Nothing but a Burning Light, but man, he hit me like a freight train. The folky singer-songwriter—with his jazz and world-music-tinged sounds, and his songs about progressive politics and spirituality—was exactly what I needed to hear, and he had a rich back catalog to dig into, not to mention many more amazing albums to come, most recently Crowing Ignites (2019). He can do no wrong in my book. 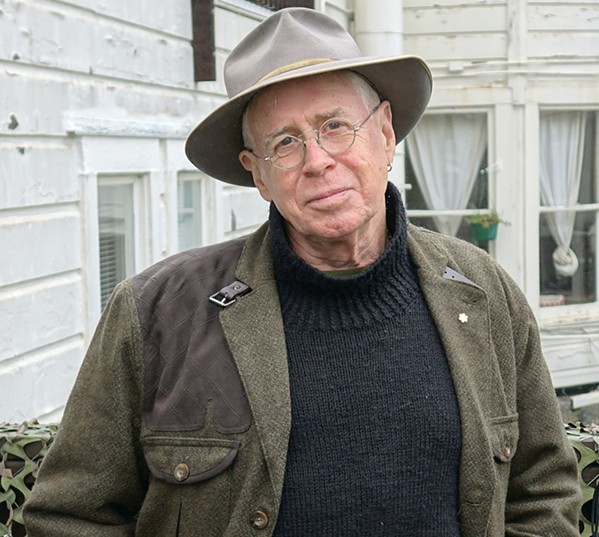 You know those internet memes asking people to badly describe their jobs without really describing their jobs?

"My job," Cockburn explained in press materials, "is to try and trap the spirit of things in the scratches of pen on paper and the pulling of notes out of metal."

He's an insightful and spellbinding songwriter and an exquisite guitarist who picked up musical ideas during travels to far-flung places such as Guatemala, Mali, Mozambique, and Nepal. His activism is also well known, "on issues from native rights and land mines to the environment and Third World debt, working for organizations such as Oxfam, Amnesty International, Doctors Without Borders, and Friends of the Earth."

"We can't settle for things as they are," he once warned. "If you don't tackle the problems, they're going to get worse."

"I'd rather think about what I'm going to do next," Cockburn said. "My models for graceful aging are guys like John Lee Hooker and Mississippi John Hurt, who never stop working till they drop, as I fully expect to be doing, and just getting better as musicians and as human beings."

There's a bunch of other shows at the Fremont this week including The Mountain Goats on Friday, May 6 (8 p.m.; all ages; $50.51 at seetickets.us). John Darnielle, known for his melancholy lo-fi alt-rock tunes, fronts them. Art rocker and fantasy metal act Cardioid, featuring Lizzy Ellison previously of Radiation City, opens.

The Emo Night Tour happens on Saturday, May 7, at the Fremont (8 p.m.; 18-and-older; $25.38 at seetickets.us). "Imagine going to a show and hearing Taking Back Sunday, Fall Out Boy, Panic! At The Disco, My Chemical Romance, and many more, all only playing their best songs ... all night long," organizers said. "The Emo Night Tour DJs will be spinning all the angst your teenage dirtbag heart desires all night long, and a special guest band will make you feel like you're at Warped Tour '08 minus all the dust and melting in the sun!"

Guitar great Dave Mason plays the Fremont on Tuesday, May 10 (8 p.m.; all ages; $41.50 to $67 plus fees at eventbrite.com). At 18, the Worcester, England, native joined Steve Winwood, Jim Capaldi, and Chris Wood to form Traffic.

The Psychedelic Furs come to the Fremont on Wednesday, May 11 (8 p.m.; all ages; $59.74 at seetickets.us). The Psyche Furs were new wave favorites who blew up after their song "Pretty in Pink" exploded along with the movie starring Molly Ringwald. Now they're touring for Made of Rain, their first new album in 29 years.

He'll probably cancel because it will be too warm in the theater or the air pressure might feel off or he might smell someone eating a Slim Jim®, but supposedly Morrissey is playing the Fremont on Thursday, May 12 (8 p.m.; all ages; tickets $89.50 to $188 plus fees at eventbrite.com). Heaven knows he's miserable now.

SLO Brew Rock hosts singer and guitarist Vieux Farka Touré on Friday, May 6 (7 p.m.; all ages; $28 plus fees at ticketweb.com). He's sometimes referred to as "The Hendrix of the Sahara," but the dude is a straight-up amazing fingerstyle guitarist with a huge range.

Born in Niafunké, Mali, in 1981, he's the son of legendary Malian guitarist Ali Farka Touré, who died in 2006. He has six studio albums to his credit, most recently Samba (2017). The guitar virtuoso has a distinct style that "pays homage to the past while looking towards the future," according to his bio.

Attention, rockers! On Saturday, May 7, be up to get down to Aeromyth, an Aerosmith tribute band, at The Siren (8 p.m.; 21-and-older; $20 plus fees at eventbrite.com). They've been featured on TV many times, and they headlined the Golden Nugget Casino stage three years in a row. "Walk This Way," "Sweet Emotion," "Toys," "Dude Looks Like A Lady," "Jaded," and "Don't Wanna Miss A Thing"—hear the hits!

The Cal Poly Women's Chorus and Kitka Women's Vocal Ensemble present a concert titled Slavic Sounds, on Saturday, May 7, at the SLO First Presbyterian Church (7:30 p.m.; $10 students and $20 general at (805) 756-4849). Expect traditional Cuban and Latvian folk songs, traditional folk music from Bulgaria and the greater Eastern European region, and pieces with a message of social justice.

Bruce in the USA plays the Clark Center on Saturday, May 7 (7:30 p.m.; $50 to $58 at clarkcenter.org). It's a "high-energy, note-perfect, and visually accurate musical experience of a Bruce Springsteen & The E St. Band show," according to organizers.

SLOfolks host the Jason Anick Trio this Saturday, May 7, at Castoro Cellars (7:30 p.m.; $25 at castorocellars.com/events or by phone at (805) 238-0725). Anick is a renowned jazz violinist and Berklee College of Music professor who spent 10 years touring with Django Reinhardt master John Jorgenson. Anick's style leans heavily on virtuoso violinist Stephen Grappelli.

The Famous Jazz Artist Series returns to the Harmony Café this Sunday, May 8, with a Tribute to Cole Porter played by saxophonist Karl Welz, bassist Dylan Johnson, and drummer Darrell Voss, as well as series producers Charlie (vibes) and Sandi Shoemake (vox). Hear "Night and Day," "You Do Something To Me," "What Is This Thing Called Love," and many more. Two shows! (3 p.m. and 5 p.m.; $25 at (805) 935-9007 or charlie@talsanmusic.com; $10 minimum food and drink order required).

Numbskull and Good Medicine present a three-band punk rock extravaganza when The Bouncing Souls and openers Strike Anywhere and The Last Gang play The Siren on Sunday, May 8 (doors at 7 p.m.; 21-and-older; $27 plus fees at eventbrite.com).

On Wednesday, May 11, The Siren hosts Fayuca on their High Off Your Love Tour with special guest Street Urchinz and Jakob Nowell (doors at 7 p.m.; 21-and-older; $15 plus fees at eventbrite.com). It's going to be a massive night of reggae.

If comedy is music to your ears, check out stand-up comic Ron "Tater Salad" White, who'll be at Vina Robles Amphitheatre on Saturday, May 7 (7:30 p.m.; $45 to $65 at ticketmaster.com). The blue-collar, cigar-smoking, scotch-drinking funnyman is one of the top-grossing stand-up comedians in America. Δ