Since last Friday, March 13, the song's crept onto the iTunes charts, first landing at 72, then rising to 39, and on Tuesday, March 17, as I wrote this, it was at 33. Even at its peak in 1987, it only reached 69 on the Billboard Top 100. It was definitely one of R.E.M.'s catchiest tunes, and apparently as people hunker down in their homes to avoid COVID-19, it's a song we need again.

It probably does feel like the end of the world to working musicians. Locally, dozens of gigs have been canceled, with hundreds more canceled into the foreseeable future. Likewise, bars, restaurants, nightclubs, and other gathering places are bracing for a massive loss of income. For many working musicians, without their gigs, they're broke. Now's the time to buy some albums!

Of course, being the artistic types, some musicians are getting creative.

"I've lost over 30 gigs in the last week due to the limitations in businesses, and I assume that no other live shows will be added to my calendar anytime soon," singer-songwriter Mike Annuzzi emailed. "Because of this, I have performed live via social media, and friends have tuned in while I discuss my new release, Give Me Some of That, available March 20."

Annuzzi started playing guitar as a kid, ended up in SLO to attend Cal Poly, and started releasing his original songs in 2012. The following year he was awarded the West Coast Songwriters International Song Contest/Songwriter of the Year for his single "Pay No Mind."

"I remain active in the Central Coast music community, host a monthly award-winning television show in Silicon Valley for West Coast Songwriters, and perform over 200 dates around the state annually," Annuzzi added. "I had planned for this to be a positive moment in my career because I am releasing new music for the first time since 2016, but this year is distorted with the impact of AB-5 [the law about independent contractors] and COVID-19. I hope that fans will consider purchasing or streaming my new single not only because I am excited about the song and that more sales will help increase my chart numbers, but also because it will truly be a big support to me financially at this moment."

Annuzzi is just one example of a working musician struggling to get by. You probably know others. We're all in this together right now, and it's going to get worse before it gets better. A lot of venues and promoters get by on small margins, and many working musicians are living hand-to-mouth. Do what you can, be kind, be of service, and buy some independently released CDs! (Or stream, or buy a vinyl record, dig me?)

One innovative way to support the artists you love is via the Stay At Home Fest (stayathomefest.com), where artists are using the power of the Internet to connect to music lovers.

"Until COVID-19 ends, artists are moving their events online, and we need a place to find them," the website explains. "Stay At Home Fest brings these events together into a massive ongoing music festival-style calendar, along with a curated 'Main Stage Event.' We can slow the spread of COVID-19, support the artists we love, and fight the effects of isolation. Stay at home. But stay together." 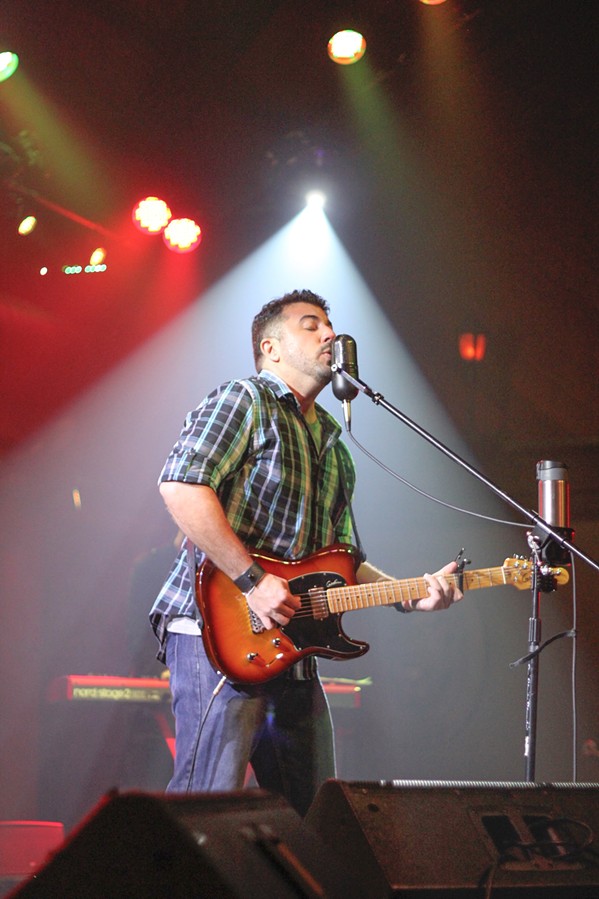 The site has a sign-up to receive notifications, a calendar of events, a way to add your own event, and a way to sponsor events if you're able. The site is managed by Fight for the Future "in collaboration with an ad hoc group of artists," their website explains. "We're a digital rights organization that works to harness the power of the Internet for good, and fight for our basic rights in the digital age. We've helped organize the largest online protests in human history, thrown epic live streams, and organized major nationwide tours. We hope we can use our tech and messaging skills to help at a time when it feels like ... we just gotta do something."

It's a great idea at just the right moment, and new events are being added all the time.

"We're working on putting together a toolkit and best practices for artists and event organizers looking to move their happenings online," Fight for the Future Deputy Director Evan Greer explained via email. Expect the site to have more resources as it develops.

Local singer-songwriter Peter Yelda was going to have an album release party for his new CD, All Along the Way, but COVID-19 has canceled his upcoming 4 Cats Café show.

"I had people coming from all over the place," Yelda lamented during a recent phone call. "I guess we've been through things like this before, like the 1918 flu pandemic. My great aunt and uncle lived through the 1906 San Francisco earthquake."

Yelda's a native Californian who's lived in SLO for decades. The luthier also has more than 40 years experience constructing and repairing guitars, and he received a National Endowment for the Arts for guitar building.

His new album features an old photo of the Motel Inn, which opened in 1925 and was originally called the Milestone Mo-Tel, the world's first motel, or motor hotel. Located next to Apple Farm, its façade still stands awaiting further restoration. The photo in question comes with a great story.

Local carpenter and surfer Ryk Kluver (who passed away in 2018) was at Cold Canyon Landfill and someone next to him was throwing out all these old photos and negatives, according to Yelda, who met Kluver because he was fixing his guitar.

"It was sometime in the '80s, I think," Yelda recalled. "Turns out the photos were by Albert Lyman, who took a lot of photos in SLO from 1912 to 1937. Ryk ended up with probably 100-plus photos—lots of old houses, the Pismo Caves, the Motel Inn, and other landmarks. I thought maybe [Lyman] was a building contractor, but I don't know. When I started thinking about releasing the CD, I thought about that image and asked Ryk, 'How do I get to use it?' He said, 'Just use it and give me a CD.'"

Because many of the new songs on Yelda's CD are about travel, the image of the world's first motel and the highway stretching into the distance as it heads up Cuesta Grade seemed appropriate.

Yelda started writing the album's songs in 2010, and many came from trips to Europe and another trip to Mexico. One of the songs that's really been appealing to people is about a trip his relatives took.

In "Edwin & Jewel," Yelda sings, "One hundred years ago in San Francisco/ before the bridges stretched across the bay/ my great aunt and uncle took a ferry/ across the water on their wedding day// They had only some food and a blanket/ for whatever the weather was in June/ with all the love you need if you were nineteen/ and wandering on your honeymoon// All the world is rolling/ rolling at your feet/ everything is simple/ simply so complete."

The song is the true story of how his aunt and uncle walked from Sausalito to Bodega Bay.

"Watch the moon rise above Tamalpais/ while the sun slowly slips into the sea/ to be in Marin in nineteen nine must have been something fine/ and what a way to start your life to be// forty years ago in San Francisco/ my aunt Jewel told this tale to me/ in the pale light of the moon I thank her for this tune/ and I wonder what's she's wondering about me."

The instrumentation on the album is gorgeous, helped in part by an A-list of local musicians such as Kenny Blackwell, Damon Castillo (who produced some of the songs), Craig Nuttycombe (who also produced a couple of tracks), Louie Ortega, and many more.

"I got all these people together and labored over it," Yelda said. "I spent a lot of time on the vocals. It was a daunting endeavor, and now I want to share it with people."

You might not be able to leave your house, but Yelda's new CD will transport you. up a copy locally at Boo Boo Records or online at CD Baby. Δ