Cannabis nuisance: Abating all the pot cultivation and abandoned grows in the California Valley is going to take a while

Garbage trucks in the California Valley have picked up almost two tons more trash on their routes since San Luis Obispo County got serious about clearing out illegal cannabis growing operations. 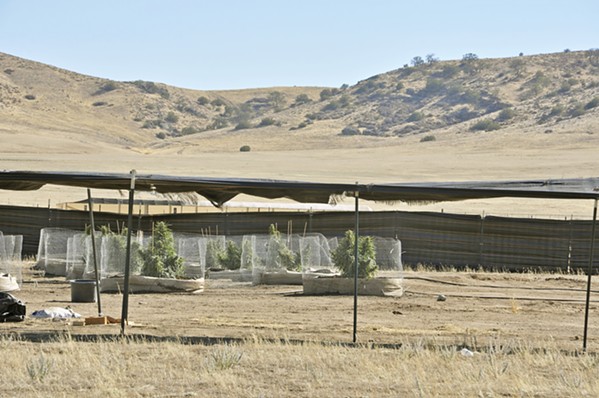 That's over the last couple of weeks, according to Carrie York, the California Valley Community Services District's general manager. The district handles road maintenance and trash for the antiquated subdivision laid out along Soda Lake Road on the southeastern edge of the county.

"They really started to come down on the growers. My guys are complaining, 'Oh my god! They're [growers] just dumping [trash] from all over.' They are bringing it to the hotel and dumping it right there," York said, referencing the small motel on Soda Lake Road. "There's not a way to police what's going on. ... There's just water trucks and growers and they move around at night after we are sleeping."

On June 21, SLO County Planning and Building and the Sheriff's Office served six abatement warrants on California Valley properties, shredding 2,600 cannabis plants (about 2.63 tons) on site and trucking the remains to the closest landfill under law enforcement escort, according to Art Trinidade, the county's code enforcement supervisor. The action is just the beginning of the county's plan to address the hundreds of cannabis grows in the California Valley, which became such an issue starting in 2016 that the SLO County Board of Supervisors eventually banned cultivation in the subdivision through an urgency ordinance. Trinidade estimates that about 200 cannabis grows are operating illegally or abandoned in the valley.

"From start to finish, it's taken us two years to get to this point," Trinidade said. "It's easy math to say this is not going to be an easy process."

Each has to go through a cannabis abatement hearing, which the county designed to speed up the normal nuisance abatement process. Trinidade said they took a months-long process and shrunk it down to about 10 to 14 days. At two hearings per month of five to six cannabis grows a piece, it's going to take a while to get through the list of alleged illegal cultivators. Although the county passed its marijuana ordinance in November 2017, which outlaws cultivation in certain areas of the county, it didn't hold its first round of hearings until May.

Trinidade said that his department has yet to total up the costs for abatement, but cleanup of materials such as fencing could cost a couple of thousand dollars while abating the actual cannabis could run up to several thousand. Although taxpayers are footing that bill for now, eventually the property owner or cannabis grower will get the bill.

"We're hoping that once they see the billing from the county, they will realize it's just cheaper to do it themselves," Trinidade said. "We're actually calling it a California Valley restoration and here's why: We have at least four animals out there that are listed as endangered species."

The county has to coordinate with agencies like the California Department of Fish and Wildlife and the U.S. Fish and Wildlife Service to ensure that in the abatement process, workers don't do any more harm to the habitat than has already been done.

"It's a complicated, paperwork-filled, biologically sensitive area," he said. "We're trying to do the best we can."

To help with that process, the board approved temporary help for code enforcement in the recent budget—960 hours for a year, Trinidade said, adding that he's taken as many resources as code enforcement can bear and moved them over the California Valley project.

Stepping up enforcement is welcome relief to some residents of the California Valley, who have wondered what took the county so long to start taking action. County Supervisor Debbie Arnold (5th District) said she used to get a lot of calls from constituents wondering why they had heard that the county passed an urgency ordinance but couldn't see its results. It seemed like grows just continued to proliferate, she said, regardless of the ban.