There are many words that could be used to describe the California Valley: flat, hot, sunny, rural, remote, lawless, desolate, dry. Soon, a new descriptor can go on that list: marijuana-growing mecca.

The sparsely populated community rests along Highway 58 in the southeastern corner of San Luis Obispo County, one of the last stops before heading east into the Central Valley. It’s surrounded by the Carrizo Plain National Monument and land that a handful of families has grazed and dry-farmed for generations. Visitors are drawn by the spectacular spring wildflowers and the San Andreas Fault, and the development of two massive solar projects brought a recent boon to the area.

Since springtime, large-scale, legal medical cannabis grows started popping up—in the open—most on empty lots. Only a black mesh fence stands between the outside world and the plants they hardly attempt to hide. Currently, there are more than 100 grows planted, according to SLO County Code Enforcement Supervisor Art Trinidade.

“I don’t mind the gentlemen pot farmer at all. I know it has great medicinal uses,” California Valley resident Pati Nolan said. “But what these guys are doing is illegal, both for the code enforcement and for the water issues.”

Nolan is among several residents who shared their concerns with New Times. They’re especially nervous about what will happen come harvest time, but there are also the water supply and the potential environmental impacts to an already dry ecosystem that hosts several endangered species.

The authorities are definitely taking notice.

SLO County Sheriff’s Office Detective Greg Beuer, who heads marijuana-related enforcement for the department, said it’s not necessarily the marijuana that’s an issue—it’s everything else that could come with these types of grows.

“Right now they’re immature plants; nobody cares. Come early-to-mid August, you’re going to have millions of dollars of stuff growing out there,” Beuer said. “Forget the marijuana itself. That’s not our focus. Our focus is the environmental damage, and there is going to be some violence out there sooner or later. When you see what’s going on, it stands to reason.”

While law enforcement can’t do much because the grows comply with Proposition 215 medical marijuana laws, they’ve assisted code enforcement officials from the county’s planning and building department in a massive proactive code enforcement sweep, which Trinidade said isn’t explicitly targeting marijuana—the area has a history of code compliance problems—but that wide net’s caught several grows along the way.

The enforcement actions are focused on health and safety risks—unpermitted sheds, fences, water tanks, and dwellings like trailers, shacks, and tents. As of June 23, more than 100 cease and desist orders were handed out, and 90 of those were issued at grow sites.

While many of the growers Trinidade has interacted with have basically been cooperative farmers—he even said the plants appear to be of very high quality—the overall situation is still a matter of health and safety.

“It seems realistic that the individuals out there are the initial wave of the growing process and the muscle will come in later,” he said. “We have to be concerned about the safety of just normal people driving to work or living their lives in retirement out in California Valley. These are all things that are a big concern for the Department of Planning and Building.”

Thus far, there’s only been limited indication of environmental threats. Beuer has seen the presence of chemical fertilizers and insecticides, but not the harsher illegal chemicals found in some “trespass grows” on public and private lands. He’s also seen evidence that people are defecating into open pits. Because of the area’s high water table, both pose a health risk.

Todd Tognazzini, a patrol lieutenant for the California Department of Fish and Wildlife, said there haven’t been any cases of endangered species being killed.

Growers are purchasing water from the California Valley Motel, getting it free from the community services district’s unmetered well, bringing it in from outside the valley, or drilling their own domestic wells. These don’t appear to be illegal, but it still concerns residents.

Since spring, land in the California Valley’s been snatched up as soon as it goes on the market, and prices have shot up. Megan Burgett, a realtor with Century 21, said property normally priced at $3,000 now sells for $15,000. According to a real estate database, 20 lots sold in May and 13 in April, almost always purchased with cash upfront. 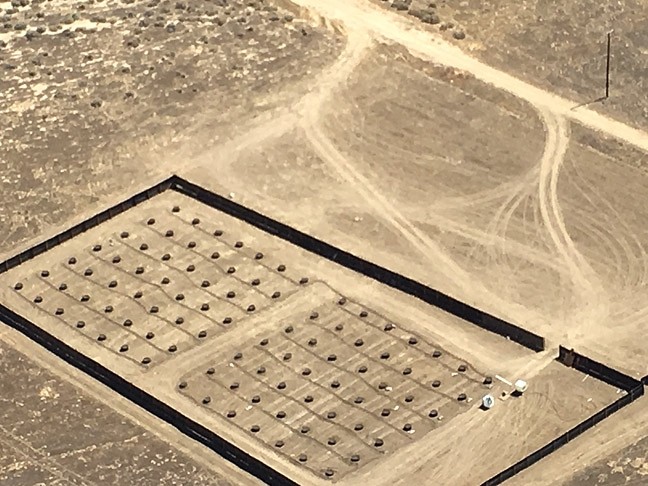 While no one’s exactly sure how this all started and who’s driving it, several people familiar with the situation say a majority of the farmers are Hmong—an ethnic group that experienced mass migration, fleeing from Laos and surrounding countries following covert wars tied to the Vietnam War. Many Hmong communities settled across the U.S., including in the Central Valley, where many became farmers.

Beuer said there’s a certain uniformity among the grows—the same materials, the same planting scheme, the same tents—that makes him suspect some coordination.

“It’s like if you called Lowe’s and you say ‘send me a 12-by-12 shed,’ and when it arrives, every latch, every post is in that kit,” Beuer said. “Somebody is controlling that.”

Of the 40 people Beuer spoke to during the recent code enforcement sweep, only two were from the county. New Times contacted one Hmong grower who said he was from Fresno, and his 49 plants were being grown strictly for personal use. He said he shares a plot with a friend, who’s also growing 49 plants.

Marijuana cultivation, both legal and illegal is not exactly new to the California Valley. Two years ago, five illegal grows on trespassed land were shut down in the area, including an 18,000-plant grow on land that was part of mitigation efforts for First Solar’s Topaz Solar Ranch project. Hmong and Laotians out of the Central Valley were tied to all five of those grows.

But things have changed. Several of the current grows are legal and being done on rightfully owned land. In fact, some suspect the operations came here because SLO County doesn’t yet have an ordinance regulating medical marijuana cultivation, whereas Fresno County has banned it outright and Kern County has set strict limits.

Hezekiah Allen, executive director of the California Growers Association, urged that people not rush to judgement.

“Just because someone is from out of town and doesn’t look like us, it doesn’t necessarily make them a criminal,“ he said. “Sometimes we assume the worst, and it’s really important that we not do that.”

SLO County is currently drafting an ordinance in conjunction with new state laws that will regulate medical marijuana and a November ballot referendum that would legalize recreational use. As part of the process, the county has been working with several stakeholders, including growers advocating for regulations that would favor existing and responsible operators. Representatives of those growers—including a group of longtime farmers and ranchers called the Central Coast Growers Alliance—say those regulations would prevent many of the grows in the California Valley and they worry that the situation, which one member called a “shit show,” may taint the ordinance drafting process.

“This situation is exactly why we need local government to take the lead on figuring out responsible policies and establishing a workable permit framework,” he said.

“It’s a matter of where do we want marijuana to be cultivated,” Arnold said. “For out there, I think the name of the game is to just figure out what we want to do and get an ordinance that takes care of that. Otherwise, law enforcement is having a very difficult time controlling the quantities of grows out in California Valley.”